Passengers line up at George Bush Intercontinental Airport's baggage claim walk in line to talk to an employee for help with finding their bags amid baggage arrival delays. Photo by Faith Bugenhagen

Grace, a grandmother from Florida, was planning on arriving at the Tampa International Airport to catch her flight awaiting her visit to her two-month-old granddaughter, when she received a text message from Southwest Airlines that her flight was delayed.

“I got a message that the flight was going to be delayed a half an hour, then it was delayed longer than that,” said Grace, who chose to go only by her first name. “I got to the airport later and the plane that was in front of my flight was late arriving.”

This delayed Grace’s flight another time, forcing her to wait about two hours to begin her trip to Houston’s Hobby Airport.

Fliers at Hobby Airport check the airport's flight status boards to ensure that their flights have not been delayed ahead of entering into security.
Photo by Faith Bugenhagen

This was not the only delay that occurred Wednesday morning, as the Federal Aviation Administration ordered airlines to pause all domestic departures Tuesday night until 9 a.m. EST. Wednesday, following an outage to their Notice to Air Missions system.

Because this system is responsible for sending alerts to pilots to let them know the conditions that could affect the safety of their flight, this outage affected  airports across the country.

At both George Bush Intercontinental and Hobby Airport, delays and cancellations piled up after the outage. “This morning when I checked at 6 a.m. there were around 130 delays, but there is a domino effect that happens in the air travel industry and flight networks and aircrafts will need to catch up so everything normalizes,” said Augusto Bernal, director of communications and public relations with Houston Airport System.

United planes parked at their respective gates, waiting to be boarded by passengers who are left waiting several hours inside.
Photo by Faith Bugenhagen

The FAA announced earlier Wednesday morning that they had not yet detected a cause of the outage, but that they were looking into what occurred. However, in an updated statement from their press office at 5:36 p.m. Wednesday, the FAA announced that they have traced the issue to a damaged database file.

The FAA is continuing a thorough review to determine the root cause of the Notice to Air Missions (NOTAM) system outage. Our preliminary work has traced the outage to a damaged database file. At this time, there is no evidence of a cyberattack. The FAA is working diligently to further pinpoint the causes of this issue and take all needed steps to prevent this kind of disruption from happening again.

FAA has determined that the safety system affected by the overnight outage is fully restored, and the nationwide ground stop will be lifted effective immediately. I have directed an after-action process to determine root causes and recommend next steps.

The President has been briefed by the Secretary of Transportation this morning on the FAA system outage. There is no evidence of a cyberattack at this point, but the President directed DOT to conduct a full investigation into the causes. The FAA will provide regular updates.

This is not the first time that Buttigieg has called on the Department of Transportation for assistance, as last month’s Christmas weekend saw a string of Southwest cancellations due to operational delays.

These delays separated many family members and loved ones from celebrating the holiday together.

In their latest response on Tuesday, the Department of Transportation called for Southwest to pay back ticket refunds, provide reimbursements for alternative travel expenses and provide responses to all consumer complaints within 60 days or sooner of receiving the complaint.

The Department of Transportation’s full statement:

On December 29th, Secretary Buttigieg sent a letter to the Southwest CEO making clear that DOT is requiring Southwest to not only refund tickets, but also to reimburse travelers for hotels, ground transportation to and from hotels, meals, and alternative transportation such as coach tickets on another airline or a rental car to get to the traveler’s destination. Secretary Buttigieg also reminded Southwest that it must reimburse passengers up to $3,800 per passenger for damages resulting from the disappearance of, damage to, or delay in the delivery of a passenger’s baggage. In the letter, the Secretary wrote “The Department will use the fullest extent of its investigative and enforcement powers to hold Southwest accountable if it fails to adhere to the promises made to reimburse passengers...”

As part of its first steps in the ongoing investigation of Southwest, DOT has sent every complaint directly to Southwest and is requiring the airline to:

1. Pay back ticket refund requests within 7 business days if the traveler paid for the ticket by card and 20 days if they paid by cash or check for flights that Southwest made significant changes to or canceled, regardless of the reason, unless the passenger accepted the alternative offered such as rebooking.

2. Provide reimbursements for expenses incurred such as hotels, meals, and alternative transportation like flights on another airline or rental car by Southwest customers as a result of a canceled or significantly delayed flights between December 24, 2022, and January 2, 2022.

3. Provide substantive responses to all consumer complaints within 60 days or sooner, as required by federal regulations.

No amount of financial compensation can fully make up for passengers who missed moments with their families that they can never get back, but DOT will continue to work to ensure that Southwest takes care of its customers.

To try to curb the delays customers were experiencing, Houston airports were asking passengers to check their flight ahead of time to make sure the airline was operating the flight before going to the airport, Bernal said.

Deana and Kiara, two New Jersey residents were on one of the first flights to resume after the grounding call-off this morning at Newark Liberty International Airport.

The pair of friends, who both chose to go by their first names, flew into Houston to celebrate Kiara’s birthday.

“It was my very first flight, so I was kind of nervous when they announced right before we were boarding that we were going to be delayed, but other than that it was okay,” said Kiara.

They received word that their flight would be delayed as they were getting ready to board the flight. Employees at the gate tried their best to update them but could not provide further detail as to why the delays were occurring, said Deana.

“I think the airlines handled the delays well, I mean with what went on there’s nothing they can really do about it,” said Deana. “I actually first found out about the FAA situation from a friend who was flying at another airport, and she was like I think there’s something wrong everything’s grounded and that made me check,” said Deana.

Grace, like the two New Jersey residents, was not aware of why the delays were occurring, “I was wondering what happened, then I heard, I had just figured it was bad weather somewhere.” 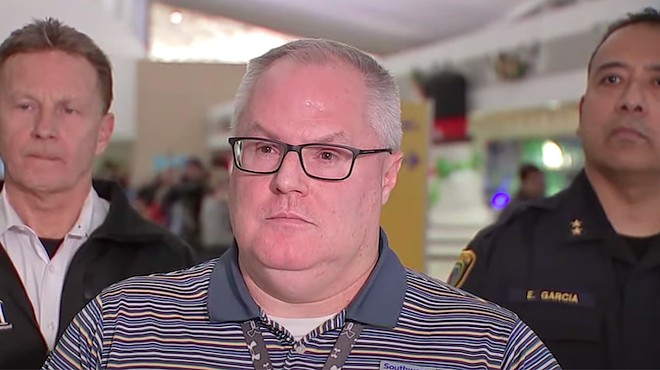