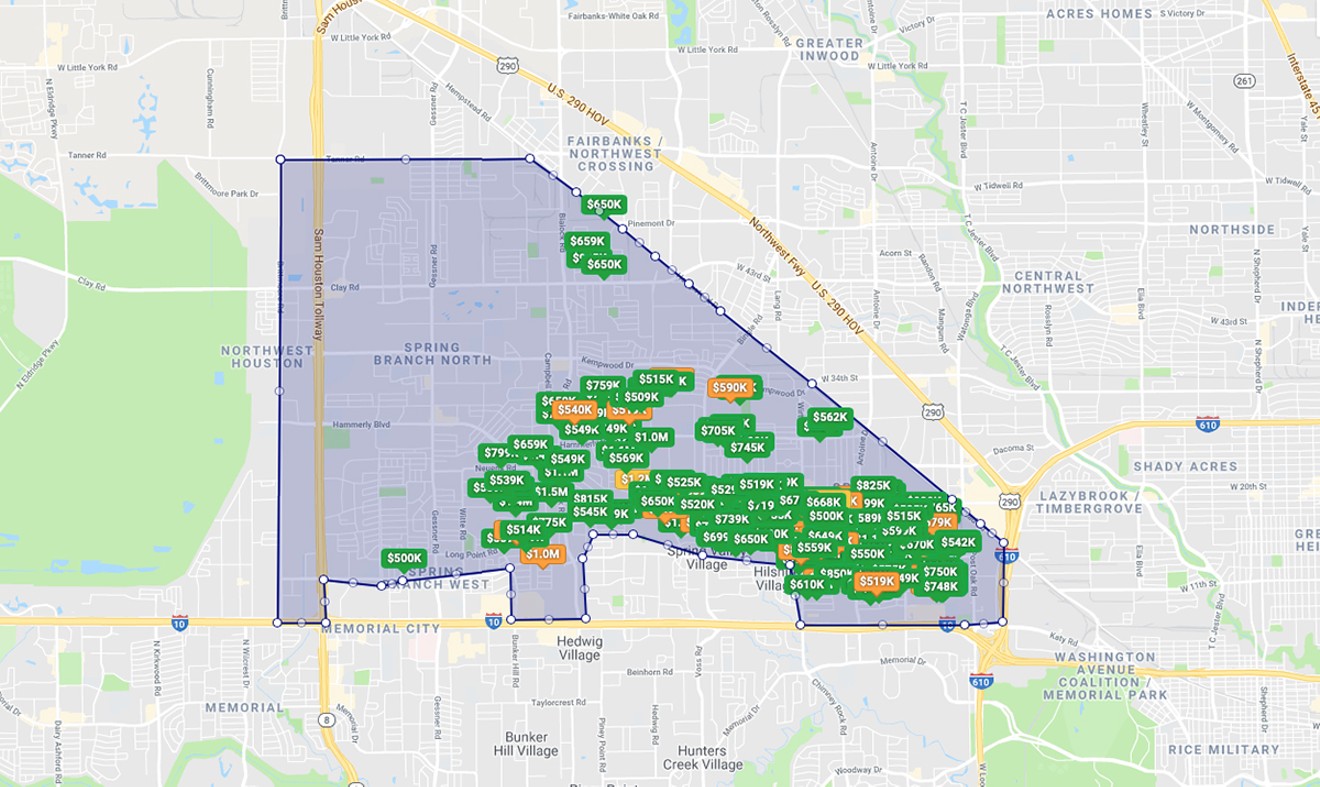 Spring Branch is undergoing a cultural shift. Screenshot from HAR.com
What does Spring Branch mean to you? For parents, it's access to an award-winning school district that's worth paying a bit more in property values. For old school Houstonians, it's a region of phenomenal growth that saw tiny West Belt morph into the massive West Sam Houston Parkway/Beltway 8 — a blessing for commuters that also served as a make-shift reservoir during Tropical Storm Harvey's flooding.

This week we're looking at the area shepherded by the Spring Branch Management District, what some call "old Spring Branch," though there's so much new construction here that there aren't many midcentury gems remaining. Roughly bordered by Brittmoore to the west, Tanner and Hempstead to the north and I-10 to the south, the region dates back to the 1830s when German farmers first settled and named roads after their families: Conrad Sauer, Hillendahl and Gessner.

Since its formation in 2005, the SBMD has been concentrating on business and economic development, public safety, environmental and urban design, and mobility. We're excited about the latter, where Long Point is being reshaped into a true Main Street; they're looking at converting the existing four lanes into just two lanes with a center lane for left turns.

Other initiatives in progress or on the horizon with the SBMD are:
Results already can be seen from initiatives like these. The good news/bad news is that, over the past ten years, median home values have increased more than 36 percent. Great for anybody looking to sell; not so great for those paying S.B.I.S.D. property taxes or trying to buy. This growth of course means that the median household incomes have increased 29 percent.

We're also seeing cultural shifts in the area. They've really cracked down on graffiti, removing more than 6,700 instances from private and public property. And the once bustling eight-acre flea market at Long Point and Hillendahl is a thing of the past — in its place  is new construction by David Weekley Homes.

Work is just about complete on this new construction at 1601 Ronson.
Rendering by LEAM Design + Build
So how much does it cost to live in Spring Branch and, more specifically, north of I-10? Let's take a look.

This four bedroom home at 9840 Warwana has been recently renovated.
Photo by Frank Salas, Frank Salas Reflections
And we're happy to report that there still are some of those iconic ranch-style midcentury properties available in Spring Branch.
For information about other properties listed for sale in this market area, visit HAR.com.

For information about the Spring Branch Management District, visit sbmd.org.
KEEP THE HOUSTON PRESS FREE... Since we started the Houston Press, it has been defined as the free, independent voice of Houston, and we'd like to keep it that way. With local media under siege, it's more important than ever for us to rally support behind funding our local journalism. You can help by participating in our "I Support" program, allowing us to keep offering readers access to our incisive coverage of local news, food and culture with no paywalls.
Make a one-time donation today for as little as $1.