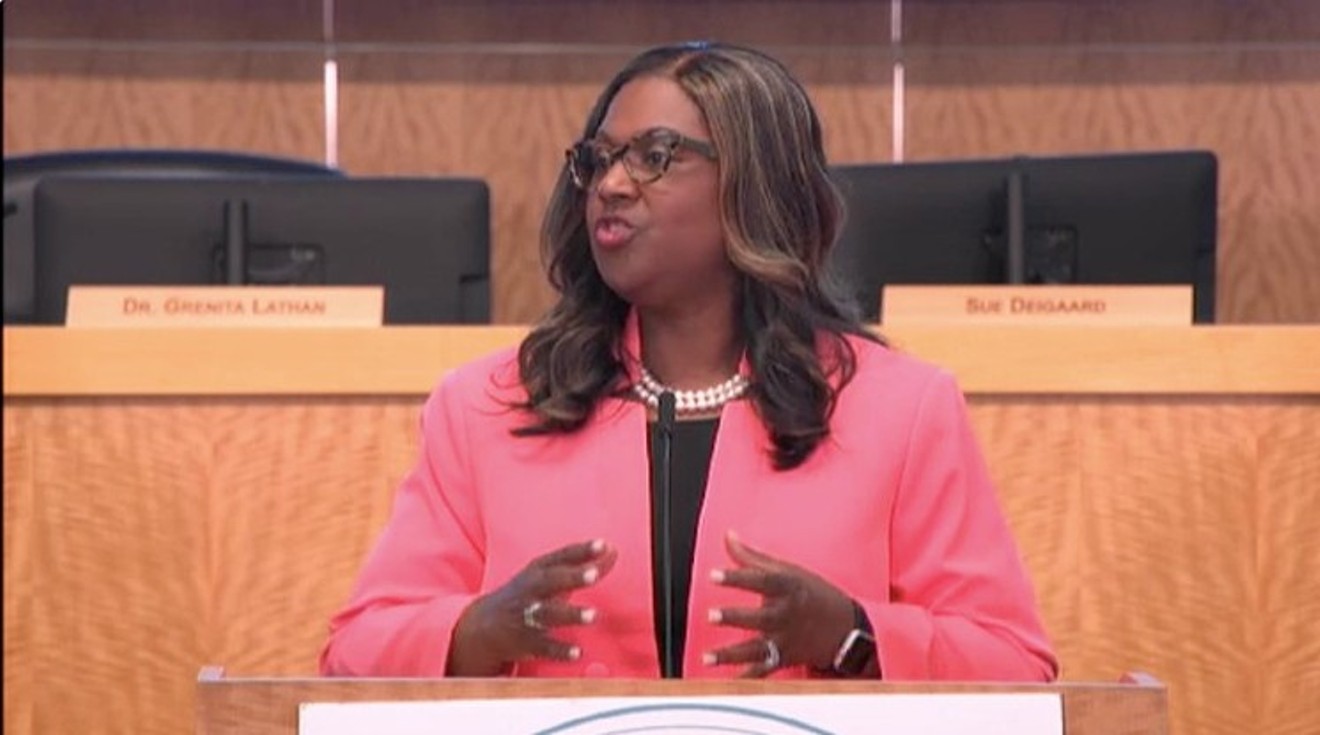 Not a good report card for Interim Superintendent Grenita Lathan or HISD's administration and school board. Screenshot
Calling the way Houston ISD provides services to disabled students a "historical failure," the Texas Education Agency Tuesday released the results of its 11-month investigation into the district. Harsh in its criticism of HISD, a special investigation unit of the EA concluded that a state conservator should be appointed to oversee special education operations in the district.

The dysfunction comes from the top of Interim Superintendent Grenita Lathan's administration and extends to the campus level where teachers are confused about special education requirements and principals are not held accountable by the district for the way in which their individual school provides services for disabled students, according to the TEA report.

"Perhaps more troubling than these historical findings concerns the District’s lack of serious initiative, rather yet success, in attempting to take corrective action to reform its systems," the report said. This comes after TEA's earlier ad hoc report released two years ago pointed out many of the same problems. According to the TEA, it took HISD 21 months —until June 2020 — to even begin responding to the findings of the ad hoc report.

In response to a Houston Press request, HISD's press office issued this statement:

"We are disappointed with the outcome of the investigation and believe it is factually and legally incorrect. Much of the report is devoted to years-old information from old reports and does not address more current information provided in the district’s response. Further, several of the years in question were years in which TEA itself illegally imposed an 8½ percent limit on the identification of special education students. HISD is analyzing the report in detail and will have a more comprehensive response plan in the future."


In an initial complaint to the TEA from the U.S. Department of Education Office of Special Education Programs in August 2018, it was alleged that in violation of state and federal laws governing education services to disabled students that the district was not doing timely initial evaluations and reevaluations and that it "falsified date in order to hide these failures." It also said that district administrators took no action on these and other noncompliance problems when they were presented to them.

Of course, reports critical of the HISD special education operation — in addition to parental complaints — preceded the DOE complaints in 2018. In 2010 an HISD-commissioned study concluded, among other things, that there was an over representation of African American and Hispanic students in Mental Retardation and Emotional Disturbance categories. And an under identification of students with dyslexia receiving special ed services.

A follow-up HISD-commissioned report in 2017 found continuing problems and said "There is confusion about, and inconsistent implementation of, processes related to intervention and special education identification." It also noted there wasn't enough staff to meet the number of special ed students who needed help.

Another HISD ad hoc committee in 2018 concluded "The state of Special Education in HISD is grave," finding among many other things that principals were not being held accountable for special ed services on their campuses, that under identification of students needing help continued and that communication with families of disabled students was at best inconsistent. It also noted that HISD[s in-district charters had "startlingly low rates" of identified students with disabilities.

And then there was the damning Legislative Budget Board investigation of 2019 that concluded that HISD's administration including the superintendent and many executive leadership positions were "not effective or efficient."

More recently, TEA conducted an onsite investigation November 18-29, 2019 at at Roland P. Harris Elementary, Ortiz Middle School, Furr High School, and T.H. Rogers High School. Once again TEA found inconsistent practices and that staff members at the campus and district levels weren't at all sure what HISD's special education policies and procedures were.

In its response to the TEA, as cited in the TEA report, HISD states that the Special Investigative Unit's conclusions are "premature, conclusory and unwarranted" because it should have waited for new data that was to begin being collected in February 2019.

HISD also criticized TEA "for not accounting for HISD's high numbers of economically disadvantaged students and students who are English learners." HISD also said the deficiencies cited in earlier data were "outdated, unreliable, and irrelevant." TEA rejected those arguments saying students in economically disadvantaged circumstances deserve as much  or more help as those in more affluent situations.

In its summary of its 44-page report TEA's investigating unit stated: "This report finds that HISD has violated special education requirements. This noncompliance is significant, systemic, and widespread." The problems have continued even though HISD has been well aware of the depth of the problem, the TEA report says.

As a result it recommends naming a conservator "who will work with HISD to identify the issues that led to non-compliance and report to the agency on the development and implementation of a plan to address the issue."
The appointment of this conservator would be in addition to Dr. Delores Delaney who has already been working as a conservator with HISD for several years.

As it stands, the TEA investigators concluded:

"HISD does not hold principals accountable for special education services or for the education of students with disabilities.

"There is not sufficient oversight to ensure that students with disabilities are appropriately evaluated and provided the services they need, to ensure that HISD personnel are appropriately trained, or to ensure that training is implemented with fidelity across the district."
KEEP THE HOUSTON PRESS FREE... Since we started the Houston Press, it has been defined as the free, independent voice of Houston, and we'd like to keep it that way. With local media under siege, it's more important than ever for us to rally support behind funding our local journalism. You can help by participating in our "I Support" program, allowing us to keep offering readers access to our incisive coverage of local news, food and culture with no paywalls.
Make a one-time donation today for as little as $1.