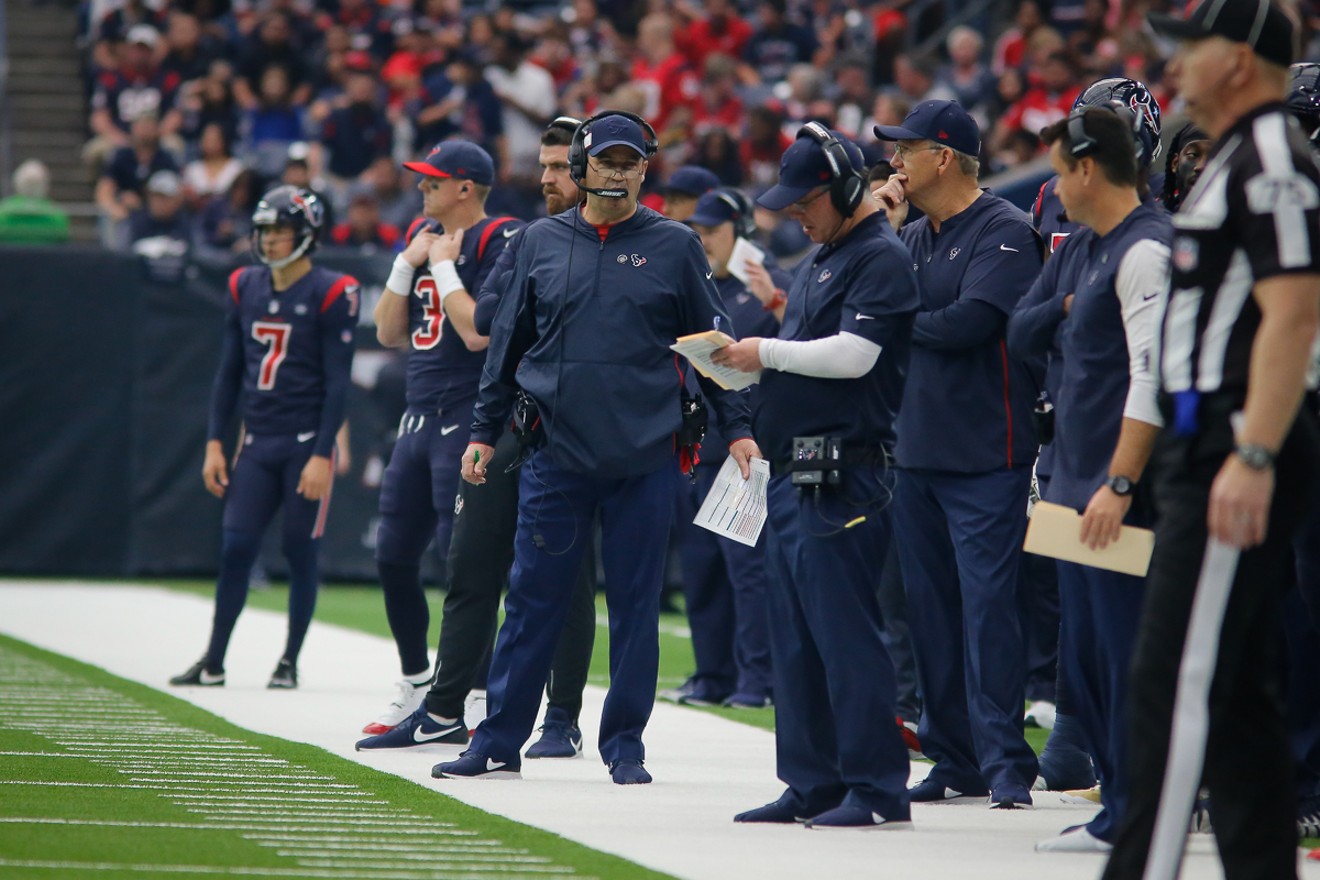 O'Brien reportedly will be promoting Tim Kelly (behind O'Brien in pic) to offensive coordinator. Photo by Eric Sauseda
For a head coach who won nine games in a row at one point this past season, and led his team to an 11-5 record, Bill O'Brien has, at best, an odd relationship with the Houston Texans fan base. I suppose a 1-3 career record in the postseason is an appropriate cause for the skepticism among the Texans' hardcore followers.

If you asked those fans what they would wish for this offseason, given the chance, O'Brien's ceding the offensive coordinator's role that he adds to his head coaching duties would likely be at or near the top of the list. So while it's not fully clear what exactly this news below means — hell, the team hasn't even announced anything officially yet — it appears there will be some movement within O'Brien's staff soon:

Ok, I have a few thoughts on this development. Here we go:

Now we see why Sean Ryan took a lateral move to Detroit.
It seemed strange last week when Texans wide-receivers-coach-turned-quarterbacks-coach Sean Ryan decided to leave for the Detroit Lions for the exact same job, a lateral move professionally for a serious downgrade in city quality and hope at the quarterback position. Well, now it makes sense. Not only would Sean Ryan, who reportedly (and unsurprisingly) wants to call plays, not get the chance to call plays with O'Brien still handling those duties (more on that in a moment), but he was clearly being passed over for the promotion to offensive coordinator. In the end, for Ryan, it's more a "fresh start" than a "lateral move," in all likelihood. However, it is kind of interesting that, in a way, the promotability of your assistant coaches has become a bit of a referendum on head coaches. In other words, Sean McVay's quarterbacks coach (Zac Taylor) is going to be a head coach for the Bengals because he's tied to Sean McVay. Bill O'Brien's quarterbacks coach is taking a lateral move to the same position with the crappy Lions. Food for thought.

This promotion will probably satisfy almost no Texan fans.
Kelly is a long time O'Brien charge, having been a graduate assistant at Penn State under O'Brien, before making the move to Houston as an offensive quality control assistant in 2014. He helped out Mike Devlin on the offensive line for a couple years, before taking over the tight ends position group in 2017. In short, this is someone O'Brien knows and has essentially handpicked for career advancement from the get go. That can be good or bad — if Kelly is indeed worthy of the promotion, then it's great. However, if O'Brien is wrong on Kelly, then it just looks like he's bumping up one of his buddies who's been with him from previous stops. To be fair, I have no idea how good Kelly will be at his job, although his assisting with this offensive line and heading up the tight ends the last couple years doesn't exactly fill me with confidence that he will be as great as O'Brien claims and hopes he will be. We shall see.

In the end, is this really a big change?
The consensus seems to be that O'Brien will retain play calling duties so, in the end, does this really create much functional change on game day? I suppose if this new role is letting Kelly have more input on the game plan, and architecting the playbook, then that's something. I guess. Frankly, I'll be more interested to see who O'Brien decides to bring in to replace Ryan as the position coach for Deshaun Watson, as that person has a chance to have real day-to-day impact with the franchise's most important employee.