The Other Side of the Spider-Man Proposal Story 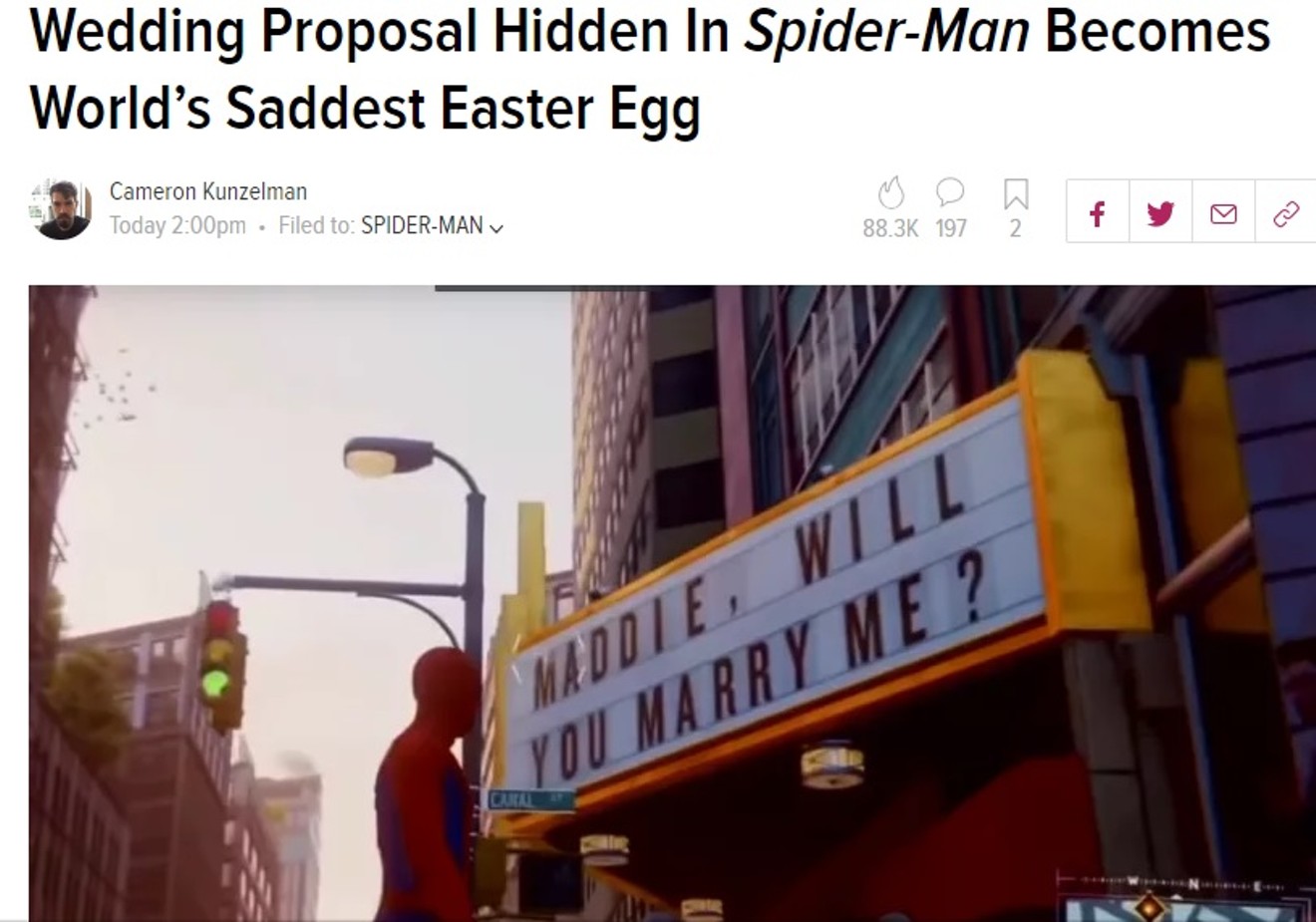 Maybe we should ask Maddie about this? Screencap from Kotaku
You might have seen a headline recently like “Wedding Proposal Hidden In Spider-Man Becomes World’s Saddest Easter Egg.” Apparently one Tyler Schultz asked Insomniac Games via Twitter if they would include a proposal for marriage to his girlfriend, personal trainer Madison Gamble, inside the latest Spider-man game. Touched, the company obliged, decorating a theater marquee with MADDIE WILL YOU MARRY ME? Unfortunately, Maddie broke up with Schultz before the game was released. Even worse, he claimed that she had left him for his brother! Jacinda Chew, Art Director at Insomniac, offered to patch the game to remove the message, but Schultz instead asked that it be changed to a tribute to his deceased grandmother, who he credited with sparking his interest in the friendly neighborhood web-slinger. Thus was the perfect bittersweet tale of a broken heart concluded.

I was immediately suspicious of the story. In a post-GamerGate world (assuming that we ARE post), taking any supposedly heartbroken male gamer at his word over something like this is rather naïve. Remember, GamerGate began its life as a harassment campaign thanks to a heavily workshopped blog post by Eron Gjoni falsely accusing his ex-girlfriend, Zoe Quinn, of various sins including sleeping with reviewers for good coverage of her game Depression Quest. It was a blatant and terrible act of control by a jilted man marketed to angry young male gamers. Schultz’s tale had a similar feeling.

One thing I noticed in coverage of the proposal story was that no one had apparently bothered to talk to Gamble about it. After a few minutes of research on Facebook, I reached out to her for her side of the story.

“Basically Tyler and I had been together for over 5+ years,” says Gamble. “We started dating when I was 15 1/2 and we moved into my parents’ house together shortly after due to unforeseen circumstances. Us moving in together so young was I think really hard on our relationship. We were living like the Brady Bunch with eight people in our house.

Our relationship was great for a long time, but I started to realize about a year ago that I was not happy. I kept it going because I wanted to make it work, but he has done some things that I realized I really shouldn't have forgave him for. Our relationship had issues both mentally and physically... He never understood me unfortunately.

Even the proposal which he thought was the save all of our relationship was never the way I would have like to be proposed to. I never liked video games, but I sat through them because I loved him. Our relationship turned into a mother and son relationship where I had to remind him about things, I had to deal with his financial mistakes, his violent outbursts etc. We never did things normal couples would do like go out, dance, parties, sit under the stars.

I told him in July that he had a month to change my mind and it didn't happen, so I broke up with him. I have big prospects in life and I am a highly motivated individual, but it was extremely challenging to have to be someone else's motivation to simply get out of bed or get off of his video games. As far as his half-brother goes, Tyler had asked him to check in on me and ask me how I was doing after I broke up with him, so of course we got close. And our relationship just built from there. I did not leave Tyler for his half-brother and I have never been unfaithful to Tyler.” Update 09/11/2018 - 3 p.m.: Gamble clarified later that she is not now nor has she ever dated Schultz's half-brother, and that they are just close friends. Update 09/12/2018 - 2:13 p.m.: Gamble has deleted her her social media accounts due to harassment.


Public proposals can be very manipulative. They put the recipient in a spot where refusal becomes a public counterattack, or in Gamble’s case a post-relationship smear. Dean Burnett, writing on the subject for The Guardian, says “This is a world where women can be vilified for refusing the sexual advances of a stranger, so actively rejecting someone you’re committed to could be far worse again.”

It was incredibly kind-hearted of Insomniac to offer to be a part of a fairy-tale, but it’s worth remembering that in a proposal there are two people involved. According to Gamble, Schultz’s stunt was a desperate ploy to save a disintegrating relationship in a way he felt was appropriate rather than actually listening to his girlfriend and trying to repair the damage. Worse, video game journalism has unethically reprinted his accusation that Gamble left him for his brother without seeking comment from the other party. One look at the Kotaku Facebook page under the story reveals a rich vein of misogyny and hatred for Gamble as Schultz paints her in his story of a romantic gesture gone bad.

“The things he has been saying about me hurt and that is something we mutually agreed not to do to each other, but it is not being reciprocated now,” says Gamble. “I think it's just easier for him to hate me than to be hurt by my decision to break up. I hope he moves on and finds happiness because that's exactly what I am doing.”

So, game makers. The next time some lonely man begs you to help publicly manipulate his girlfriend through a Triple A release, maybe think twice about what her position is in the situation.
KEEP THE HOUSTON PRESS FREE... Since we started the Houston Press, it has been defined as the free, independent voice of Houston, and we'd like to keep it that way. With local media under siege, it's more important than ever for us to rally support behind funding our local journalism. You can help by participating in our "I Support" program, allowing us to keep offering readers access to our incisive coverage of local news, food and culture with no paywalls.
Make a one-time donation today for as little as $1.