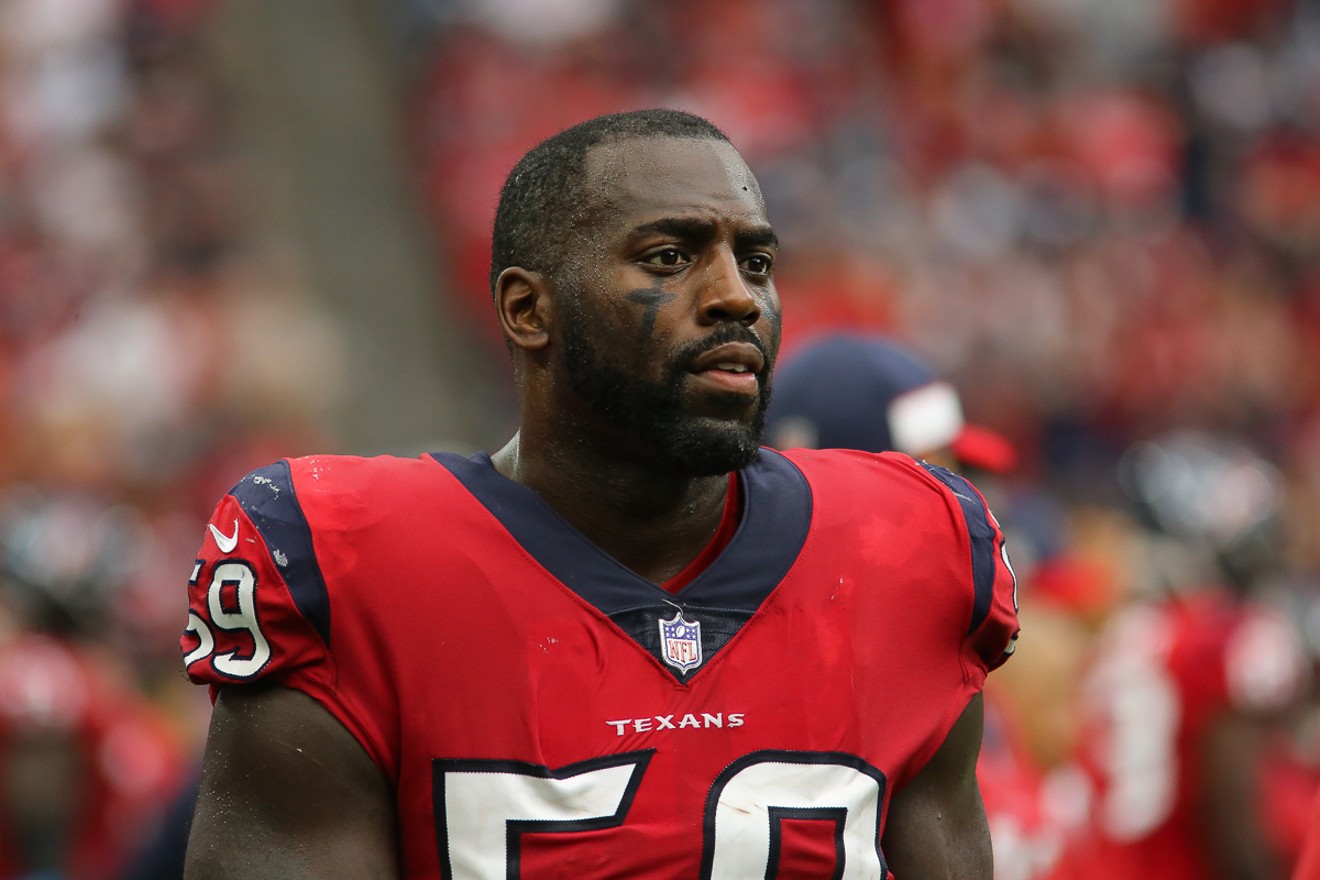 Whitney Mercilus' contract is a boat anchor the next general manager will have to deal with. Photo by Eric Sauseda
We are coming up on the one year anniversary, in a couple weeks, of what may wind up being Bill O'Brien's worst deal that didn't involve DeAndre Hopkins. On December 28, 2019, the Houston Texans inked outside linebacker Whitney Mercilus to a four-year, $54 million contract, with around $28 million guaranteed. Finishing up a modest 7.5 sack season in 2019, this felt like a risky overpay at the time for a guy who is largely lauded for his football character, not necessarily his overall productivity.

Statement from OLB Whitney Mercilus (@Merci380) on getting a contract extension from the #Texans: pic.twitter.com/aG9g27qqXZ


We were happy for Mercilus the person, but a little nervous about Mercilus the future-salary-cap-figure. To that point, Mercilus had had his moments, including a double digit sack season back in 2015, and a few memorable plays here and there, but he'd never been to a Pro Bowl, and his 2019 season fell off a cliff after J.J. Watt got injured in Week 8. As it turned out, the overpay for Mercilus would not only be a harbinger of awful things to come — Hopkins trade, bloated overpay contracts for Randall Cobb, Eric Murray, and Zach Cunningham, to name a few — but it would be the WORST deal of the bunch. And, by God, that is saying SOMETHING.

Whitney Mercilus is the perfect player embodiment, the ideal metaphor, for the Texans in 2020 — overpaid, underperforming, and at times, practically invisible. Check out some of these little factoids on Mercilus' lost 2020 season:

* Mercilus has two games this season in which he didn't register a single stat on the box score. No tackles, no QB hits, no sacks, no pressures, no turnovers caused. Nothing. Zero. And, in fact, he would have had a third empty game this past Sunday against the Bears, except the league credited him with ONE QB hit at some point after reviewing the game film. (My guess? They credited him with a QB hit for shaking Mitchell Trubisky's hand after the game.)

* On top of the complete goose egg games that Mercilus has put up, he has just 20 tackles in 12 games played. (NOTE: He missed one game this season while on the COVID list for contact tracing when Jacob Martin tested positive. Amazingly, the Texans won that game!) Twelve of those tackles came in the first four weeks of the season, so this means he has eight tackles in his last eight games, and in seven of those games he's had either one or zero tackles.

* The drought has only worsened as the season has gone on. The last time that Whitney Mercilus tackled another NFL player was late in the second quarter of the Lions game on Thanksgiving Day, when he registered a coverage sack on Matthew Stafford. Mercilus has actually gone 150 minutes and 15 seconds of game time, and 114 snaps played, without tackling an opposing player. Keep in mind, he plays in the FRONT SEVEN on a defense that opposing teams run at CONSTANTLY. He should be getting at least two or three tackles a game just from getting in somebody's way and getting trucked and letting gravity do the rest.

* The following players have more tackles than Whitney Mercilus the last two games — punter Bryan Anger, wide receiver Brandin Cooks, and tight end Kahale Warring. They each have one.

Texans DC Anthony Weaver asked about Whitney Mercilus' Sunday: "I know while he may have had a quiet game on the stat sheet, there's a lot of things that he does that don't always show up ... he does so many selfless jobs for this football team and I know he wants those stats." pic.twitter.com/f7SBv6wjGH

I love Anthony Weaver, which is why I hate to have to see him cover up for overpaid, underperformers. His is a defense that is, unfortunately, full of them. As for Mercilus, he isn't going anywhere any time soon. He still has his 2021 salary fully guaranteed, so chances are, the next regime will either have to play him out of obligation or eat about $11 million.

Frankly, I'm not sure I can watch another season of Mercilus' glacially slow spin moves and empty snaps. But if it's like the last two weeks, I probably won't notice anyway. Mercilus is, after all, hard to find out there.

Invisibility has its benefits, I suppose.