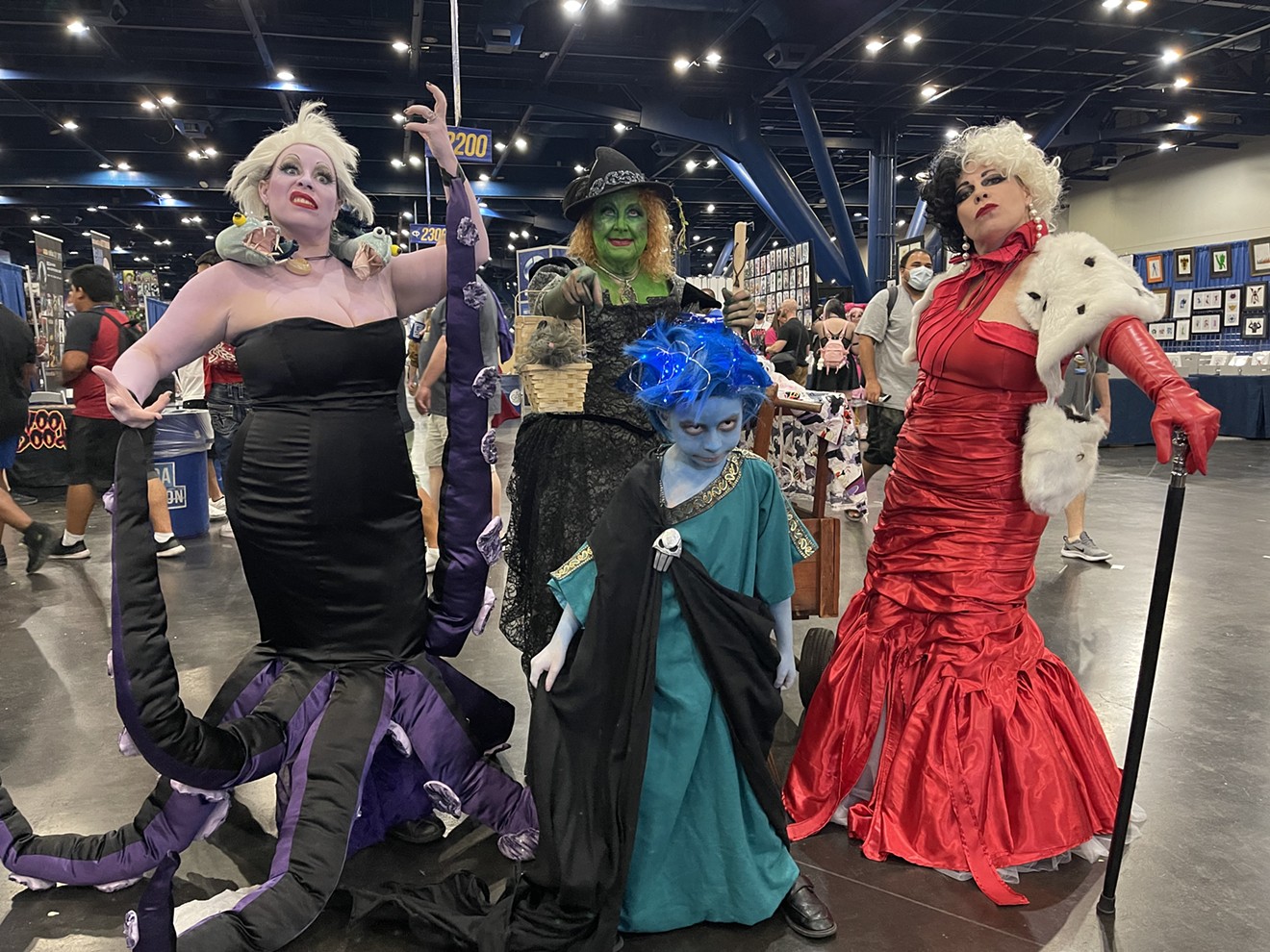 Fans cosplayed as various figures from movies, television, and comics. Photo by DeVaughn Douglas
The heat didn’t stop fans of comics, games, anime, cars, cosplay and more from descending on the George R. Brown Convention center Friday and Saturday for the 2022 installment of Comicpalooza.

The convention has grown since its debut in 2008 in the lobby of an Alamo Drafthouse in Katy. After having to cancel in 2020 — a time the convention has named “The Lost Year” — the event returned downtown in 2021, with plans for and even stronger year in 2022 with the relaxation of COVID restrictions.

The massive convention fills up every floor of the convention center expanding well beyond the realm of comics. Anime fans like Haleemah Rashaad got dressed up in an homage to her favorite show with her sights set on one thing for the day.

“I’m mainly looking forward to meeting Zach Aguilar and getting anything signed by him,” she laughed as she adjusted her costume. “Being here feels really good because I don’t get the chance to travel out to other places for events like this. I’m really thankful that they’re here.”

Panel discussions, like the one led my Byron Canady of Gulf Coast Cosmos, gave fans the opportunity to discuss various aspects of comic culture.
Photo by DeVaughn Douglas
Comicpalooza makes an attempt to be all things to all people and, by and large, succeeds. Amateur and professional cosplayers walk the main hall of the convention hall posing for pictures with attendees. Vendors sell everything from Star Wars helmets to Hello Kitty stickers. Fans in one corner of the hall cheered on robots as they smashed into each other while fans in the other corner did the same for medieval knights.

Enthusiasts lined up to take their pictures with various celebrities on one side of the first floor while on the other side car fanatics took pictures alongside comic customized vehicles. On the upper levels participants competed in retro and modern video game tournaments, practiced their skills at virtual reality, perused board and card games, and exchanged costume ideas.

On top of all of that, the event had a number of panels where hosts discussed topics a wide array of topics. Whether it was the state of minority representation in comic books, an open question session for NASA officials, Women in Tech, or a Q&A with Alice Cooper, fans could easily find something of interest. The convention also has a strong focus on indie creators giving up and coming vendors a chance to present their works alongside mainstream titles. Friends and family joined in on the cosplaying.
Photo by DeVaughn Douglas
“I started this in 2015 with the idea of creating characters that I could relate to,” says writer Ben Ajayi as he took a break from selling his work. “Being here is dope because I get to meet new people. I really appreciate events like this because there are people out here looking to support indie creators like myself.”

With an event this large in scale it’s next to impossible to cover everything in one day. The fortunate thing is that Comicpalooza lasts all weekend and if you missed Friday or Saturday there is still the opportunity to participate in all the fun on Sunday. Just make sure to hydrate, pace yourself, and enjoy the largest comic convention in Texas.
KEEP THE HOUSTON PRESS FREE... Since we started the Houston Press, it has been defined as the free, independent voice of Houston, and we'd like to keep it that way. With local media under siege, it's more important than ever for us to rally support behind funding our local journalism. You can help by participating in our "I Support" program, allowing us to keep offering readers access to our incisive coverage of local news, food and culture with no paywalls.
Make a one-time donation today for as little as $1.