Reviews For The Easily Distracted:
Crawl 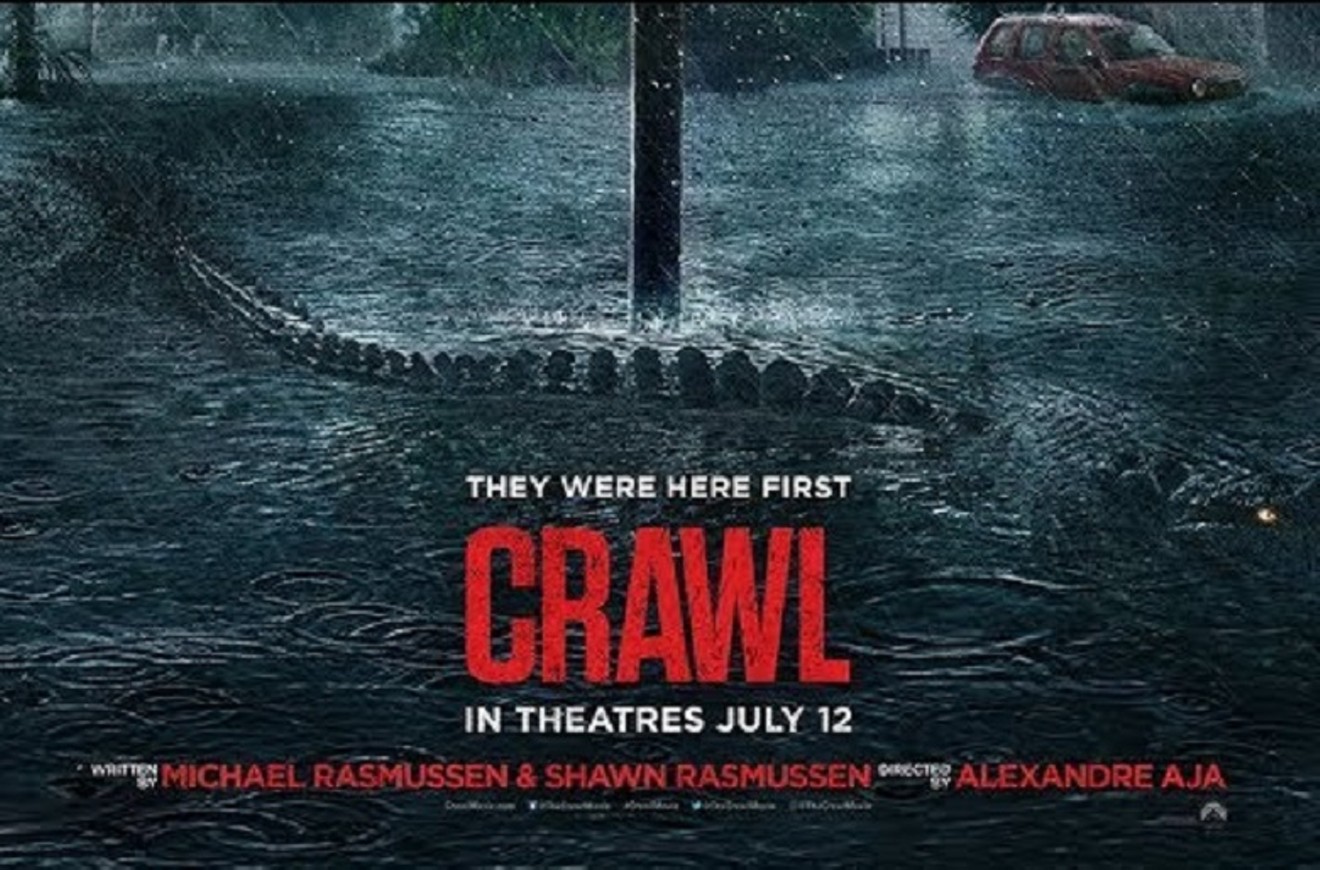 HOMER: Well Lisa, remember that postcard Grandpa sent us from Florida of that alligator biting that woman's bottom?


Brief Plot Synopsis: Big lizard in my backyard. And my kitchen. And my basement.

Rating Using Random Objects Relevant To The Film: 4 Robert McKluskys out of 5.

Not So Brief Plot Synopsis: A category 5 hurricane is bearing down on the Florida home of Haley Keller's (Kaya Scodelario) father, Dave (Barry Pepper). Haley, a University of Florida swimmer, hasn't spoken to dad in a while, but goes to check on him at the behest of her sister. Good thing, too, because Dad is injured in the crawlspace under the house, alligators are prowling, and the water is rising. Can a UF Gator outswim a real one? Can helicopters fly in a Cat5 storm? What are you, a scientist?

After an unending deluge of superheroes, "live action" remakes, and other assorted Disney properties, director Alejandre Aja (The Hills Have Eyes, Piranha 3D) delivers a horror movie that's lean, brutal, and even occasionally touching. It's also enjoyable as hell, provided you don't think too much about it.

Alligators and/or crocodiles have been pretty short-changed in the "man vs. nature" department recently. At least in this country. Australians (perhaps understandably) go to that well more often, and have produced some superior croc flicks (Rogue and Black Water, both from 2007, chief among them). Americans seem to prefer sharks, creepy dolls, or nuns for their scary movies.

But say what you will about Aja, he knows his aquatic horror. Combining the claustophobia of a subterranean crawl space with the threat of drowning is harrowing enough. Throw a couple (at first) pissed off dinosaurs (or, as Dave refers to them, "pea-brained lizard shits") into the mix and you've got some spicy survival horror gumbo.

Wait, what do they eat in Florida? Key lime pie? Yeah, that.

Credit Scodelario and Pepper for playing keeping their tongues out of their cheeks, and also for portraying competent, non-hysterical characters. The strained father-daughter dynamic doesn't always ring true, but Aja threads it in deftly enough that it doesn't drag. Scoedlario's no bullshit approach to the character is refreshing, and her Haley is one of the more capable horror movie protagonists in recent memory.

And lest you think Crawl is merely a cat and mouse game between alligators and a couple humans, rest assured other hapless victims do show up, to be dealt with in appropriately bone crunching and arterial spewing fashion.

Is it a perfect movie? It is not. The so-called "category 5" winds are awfully sporadic, and you may choke on your popcorn when Dave tells Haley, "You're faster than they are," because she's not! Still, as motivational tools go, few things are as effective at getting you a starting spot on the freestyle relay team like racing live alligators for practice.

So manage your expectations. If you go into Crawl hoping to see a woman improbably outswim large, pissed-off reptiles, or watch ATM thieves get messily devoured, you're in for one of the most enjoyable theatrical experiences of the year. If you're hoping to see a dozen alligators form a reptile Voltron, on the other hand, you're out of luck.

But the Australians are probably working on it.
KEEP THE HOUSTON PRESS FREE... Since we started the Houston Press, it has been defined as the free, independent voice of Houston, and we'd like to keep it that way. With local media under siege, it's more important than ever for us to rally support behind funding our local journalism. You can help by participating in our "I Support" program, allowing us to keep offering readers access to our incisive coverage of local news, food and culture with no paywalls.
Make a one-time donation today for as little as $1.