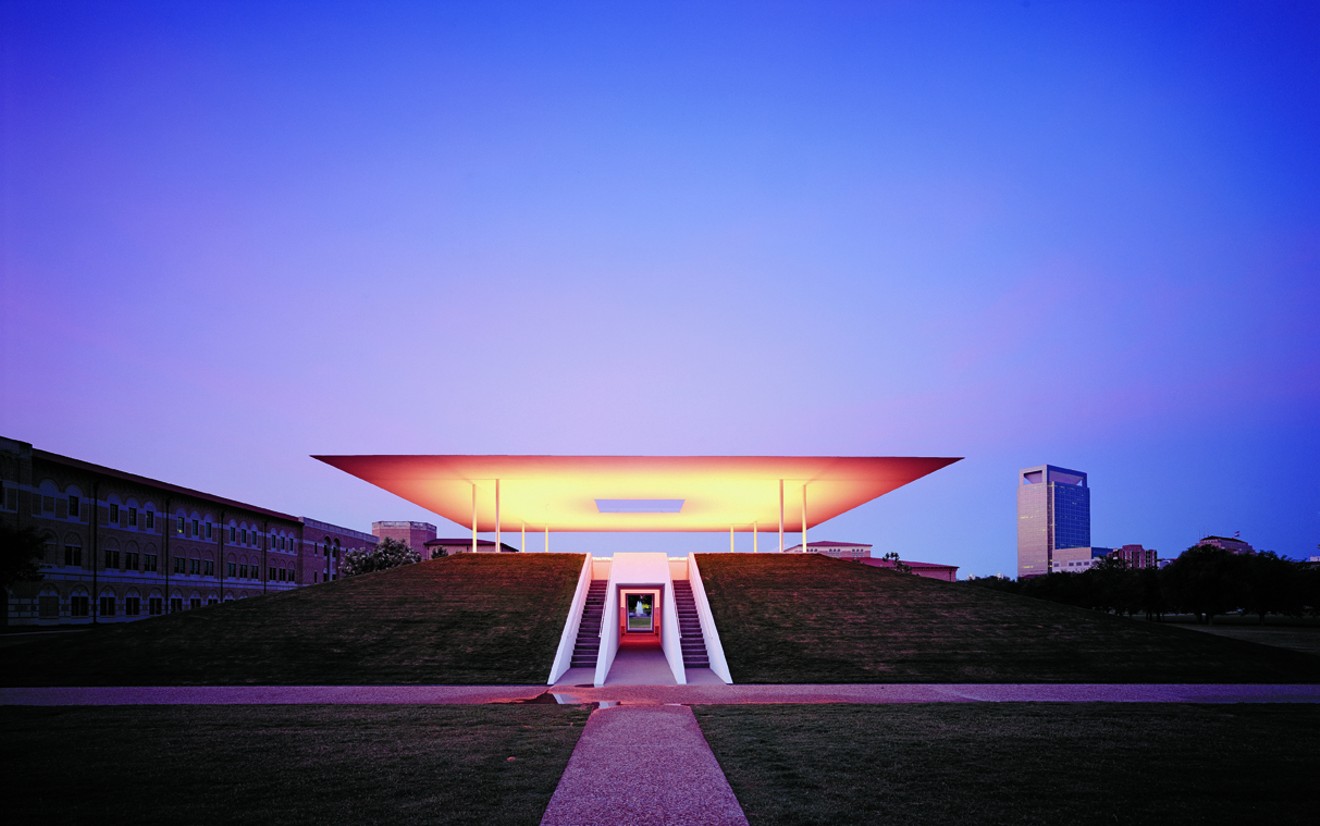 The James Turrell Skyspace on the Rice University Campus is a must-see. Photo by Florian Holzherr/Courtesy of Rice University
Houston, unlike other major cities in the United States, doesn't really have an iconic spot for out-of-town visitors. Sure, there's NASA and its rather disappointing tour. There is the much-hyped shopping at the Galleria or the historic views of the city from the San Jacinto Monument. None of these things are wrong, necessarily, just kinda boring.

The fact is Houston is much more a move destination than a visit one. People live here, but they don't come here very often as tourists, which got us to wondering where would we take people if they visited here and we were thrust into the role of tour guide? Assuming we aren't going as far as Galveston and we are not taking anyone to a seasonal event, the goal was to come up with some places that are uniquely Houston.

We asked our fellow Houstonians for some help and combined them with our own thoughts to come up with the definitive insiders guide for visitors who want to see what Houston is all about.

As an aside, we got a LOT of suggestions for places to eat. We get it. Houston is a fantastic place for dining out, but that would have to have its own list, so we omitted restaurants and bars from this particular group. We are also leaving off events like sports, theater and the like because those are subject to scheduling we can't predict.

Art exhibits don't often let you inside them, but that is not the case with the brilliant light displays of James Turrell. Turrell invites visitors to bathe themselves in the glow of his interactive artworks, the most notable of which is the Skyspace on the campus of Rice University. The grassy pyramid holds up to 120 people and is most uniquely viewed just before and during sunset when light is projected onto the structure's ceiling. It doesn't hurt that it is situated in the middle of the lovely tree-lined college grounds.

Standing on a downtown street corner in the blazing sun on an August afternoon might confuse the non-Houstonian. Where is everyone exactly? Well, my friend, they are in the tunnels. When folks working in downtown want to escape the heat and humidity, they turn into mole people and stroll through the extensive tunnel system connecting dozens of buildings and offering everything from fine dining to dry cleaning to barber shops. Sure, you can eat, but the people watching is better than just about anywhere in town.

This crazy monument to the fruit built by a former postal worker is about as Houston as it gets. It's a hodgepodge of randomness off a busy highway. In fact, "a hodgepodge of randomness off a busy highway" sounds like an outstanding new city slogan (You're welcome Houston First!). The Orange Show is truly one of the weirdest things you'll see, nevermind the fact it is crammed into a little neighborhood that has literally nothing to do with this bizarro display. It is also absolutely fascinating.

In a city chock full of unique non-artistic museums (Science, Children's, Holocaust, Funeral, Print, Weather, Heath—yes, they all exist and they are all kind of amazing), perhaps the most interesting is this tribute to desperately under-appreciated African American military heroes, from the Civil War to the World Wars. Dig deep into the lives of these amazing men and women. And don't miss the rich reenactment of Harriet Tubman by Melissa Waddy-Thibodeaux. It is as mesmerizing as it is educational. 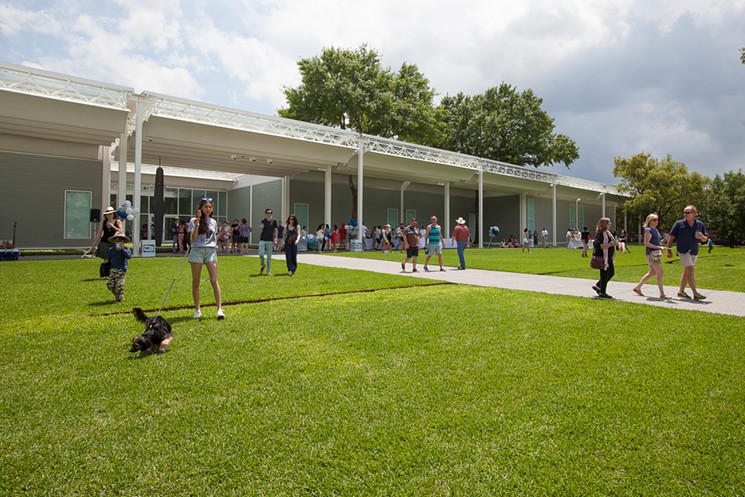 Some are surprised to learn that our city has one of the most thriving arts communities in the country, centered culturally in the Montrose around The Menil Collection and Rothko Chapel. Not only is The Menil home to one of the finest private art collections in the world, but the nearby chapel is Mark Rothko's tribute to serene minimalism. Of course, the entire Museum District is just blocks away, filled with works from the classic to the modern, but the beginning and end is tucked away near these two iconic art installations.

Why in the name of all that is holy would anyone want to be taken to a graveyard on a visit, you might be asking. Once you enter the wrought-iron gates at Glenwood off Washington Avenue, you won't be asking that question any longer. Home to the remains of wealthy families including Howard Hughes, the cemetery is also one of the most beautiful places in the city. Massive oaks drape limbs across the winding, hilly (yes, we said hilly) path along Buffalo Bayou. If you do stop to take a photo, try to remember this is an active burial site, so be respectful.

These larger-than-life statues depicting everything from the Beatles to former presidents can be found scattered around the entire region, from the twin 67-foot statues of Sam Houston (Huntsville) and Stephen F. Austin (Alvin) to the selfie-friendly We Heart Houston sign along Interstate 10 near the Heights to our favorite, Virtuoso, a huge abstract sculpture of a disembodied man playing a cello in the Theatre District downtown. 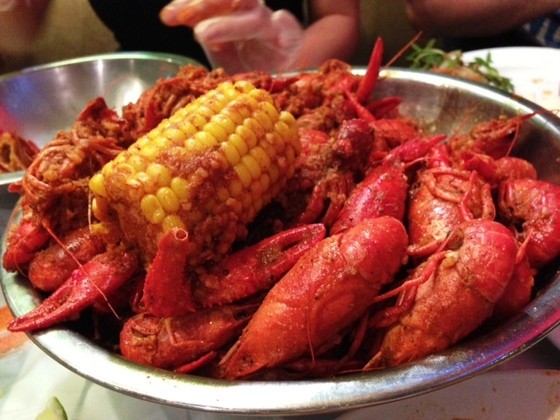 If you are already in China Town, may as well hop over to Crawfish and Noodles.
Photo by Mai Pham
Chinatown

If it's diversity you want to show off, few places in Houston demonstrate that with greater intensity than Chinatown in southwest Houston. For simplicity sake, drive down Bellaire through the heart of the area and gawk at the packed strip malls full of reflexology spots, shops and hole-in-the-wall restaurants. It's as impressive as it is overwhelming. And if you do want to take people to eat, places like Crawfish and Noodles should be at the top of your list.

Tucked inside the lovely, albeit a tad silt laden as cleanup continues post Hurricane Harvey, downtown park is one of the most extraordinary discoveries for Houston in recent history. A former, cistern used for drinking water storage, was discovered during excavation for the park. Rather than removing the cavernous underground space, it was restored to display its amazing architecture and seconds-long echoes. It is even home to exhibits and occasional performances. Tours, including ones specifically for photographers, are given on weekends.

The former home of wealthy philanthropist and art enthusiast Ima Hogg is surrounded by lush, flowered gardens and filled with stunning decorative art pieces, all run by the Museum of Fine Arts, Houston. On a nice day, strolling the grounds can help remind you of how green Houston really is despite the widely held though incorrect notion that we are a dusty Old West town.