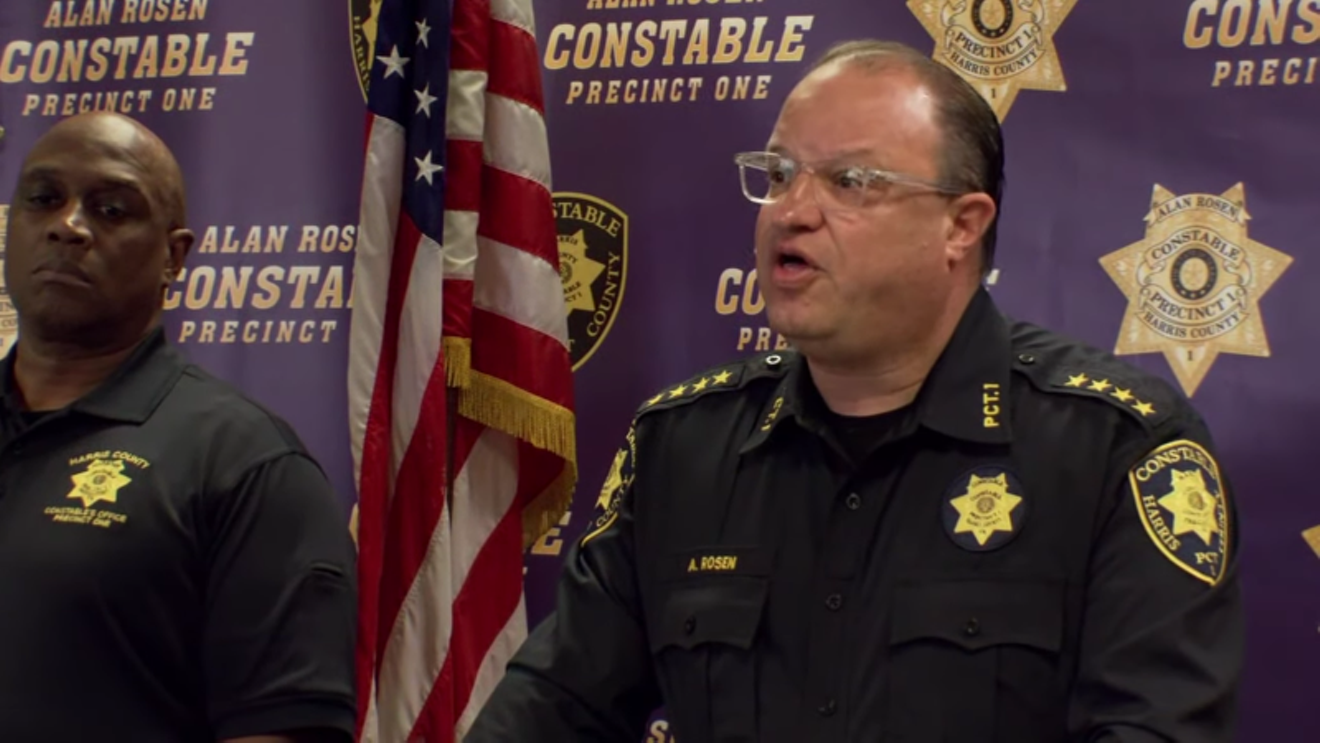 Harris County Precinct One Constable Alan Rosen (right) has been sued for allegations of sexual harassment under his watch. Screenshot
An explosive federal lawsuit against Harris County Precinct One Constable Alan Rosen and two other department officials alleges that Rosen’s office routinely held undercover “bachelor party” stings between 2019 and 2020 during which female deputies “were molested and traumatized by their intoxicated male commanding officers for their own sexual gratification.”

Now even the FBI has gotten involved, as the female deputies’ attorney Cordt Akers confirmed Thursday that federal investigators have issued subpoenas to his clients, indicating their investigation is underway.

"Our clients have been in full cooperation with the federal authorities into their investigation into the horrible misconduct in the Precinct One Human Trafficking Unit," Akers said in a statement. "The serious nature of these crimes deserves serious attention, and we are happy that this conduct will no longer go unchecked."

These young female deputies, the lawsuit claims, were subjected to extremely inappropriate behavior from their drunken, handsy superiors posing as partygoers during undercover operations at local hotel rooms intended to entice sex workers to offer their services to the incognito officers so they could be promptly arrested, the lawsuit claims.

“On the very next day, she was fired,” the lawsuit reads.

The federal civil rights lawsuit was filed in the U.S. Southern District Court May 24 on behalf of four plaintiffs: Liz Gomez, Marissa Sanchez and Felicia McKinney, all deputies within Rosen’s office subjected to the humiliating undercover operations; and Jacquelyn Aluotto, the office’s human trafficking advocate who was fired after vocing her concerns about the inappropriate activity.

The suit was filed against Harris County, Rosen and Rosen’s direct deputies Chris Gore and Shane Rigdon. Gore was the mastermind behind the bachelor party sting efforts, and Rosen gave his blessing to go forward with them. During the undercover stings organized by Gore and Rigdon, hotel rooms would be rigged with hidden cameras and plainclothes deputies would have a fake party, rife with alcohol and all sorts of lewd behavior.

The lawsuit alleges female deputies recruited to assist in these stings like Gomez, Sanchez and McKinney were told they had to wear revealing clothing and were pressured to simulate sex with their male superiors. At times, the female deputies were forced to get naked in front of everyone in the room and their bosses, including Gore and Rigdon.

“Female deputies were ordered to purchase and wear revealing clothing for these operations,” the lawsuit reads. “Each of them was ordered that during these operations ‘to maintain cover’ Chief Gore would be lying down on top of them, fondling their breasts and bodied.”

“They were never warned, however, that during this conduct Chief Gore would be wearing only boxer shorts, fully aroused, drunk, kissing and licking their bodies, and giddy after every sting,” the lawsuit continued.

Akers alleged in a press conference that Rosen hadn’t just approved the stings. “Constable Rosen appeared at one of these operations personally,” Akers claimed.

In a statement, Rosen claimed that he “proactively instructed our Internal Affairs Division to conduct an investigation,” into the bachelor party stings once deputies started to complain, and that as a result, “We have suspended these types of operations as a result of our investigation.”

“While self-describing as a ‘second-chance guy,’ Constable Rosen and The County have shown that they are deliberately indifferent to the abuse suffered by these brave women and others,” the lawsuit read. “As such, this lawsuit has become necessary to bring accountability for the horrific ordeal of these young law enforcement deputies and ensure that their experience is never repeated.”

The full 40-page lawsuit is embedded below.