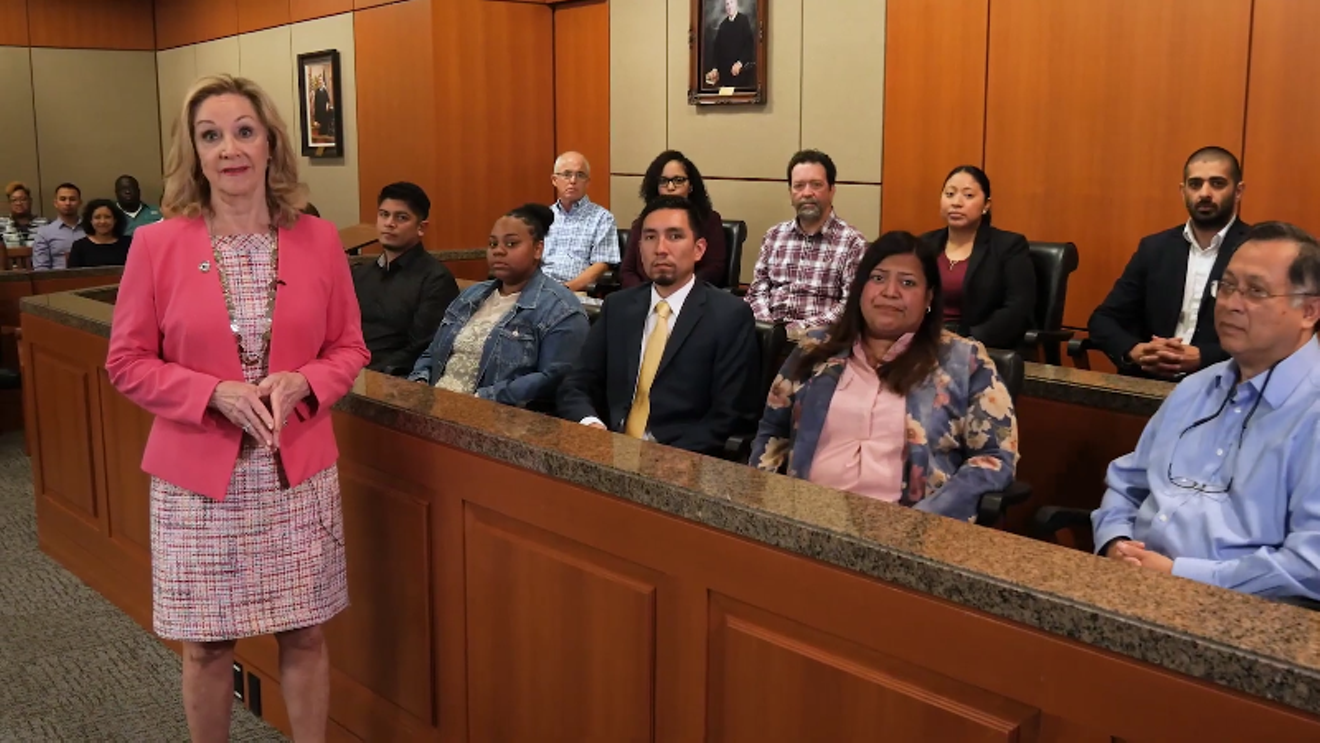 Harris County District Clerk Marilyn Burgess hopes some newly approved freebies will get more residents to show up for jury duty. Screenshot
Folks who get called up for jury duty in Harris County can expect a few extra perks coming their way in the weeks ahead, as the county Commissioners Court recently approved a new proposal giving free parking, coffee and lunch to prospective jurors.

Harris County District Clerk Marilyn Burgess, who submitted the juror perks proposal to the county which was approved Tuesday, hopes these new benefits (expected to launch in mid-June) will get more people to show up for jury duty and will encourage more Black and Hispanic residents to heed the county’s call to serve.

“If we want to improve appearance rates and the diversity of those that show up, we’ve got to treat these people with respect and make serving easier and more pleasant,” Burgess said.

Burgess said that the number one complaint her office received from county jurors was the lack of free parking, and that many county residents griped in a recent survey about having to show up at 8 a.m. to serve without being provided a morning caffeine boost. Coffee will be provided.

The issue of prospective jurors getting hungry is a new issue that arose during the pandemic due to how much longer it’s taking to work through the jury selection process at the county’s temporary jury intake location at NRG Park because both juror intake and voir dire (the step to determine which jurors will work on certain trials) are taking place there due to occupancy limits still in place at the individual district courts in downtown.

“That means that somebody may show up at eight and not get dismissed till six o’clock at night,” Burgess said. “You’re a captive audience. You can’t go out to lunch, you’re held there until you’re dismissed and the only options you have are the concession stands. And so we thought it’s only right that we give them a meal voucher to get a sandwich and a coke and some chips while they’re there.”

Parking has been free for prospective jurors during the pandemic since NRG Park has such a huge parking lot, but once the jury selection process returns to the newly-renovated downtown Jury Assembly Building, folks will be able to park for free at a nearby garage at 1401 Congress. That shift back to the downtown office is currently planned for November, but Burgess said it could happen sooner or later depending on when the Texas Supreme Court adjusts its pandemic-minded occupancy limits that still have district courts working at 50 percent capacity.

The district clerk’s office is also still pushing to increase juror pay, hoping that a pay bump will help convince more Harris County residents to show up for jury duty, particularly Black and Hispanic residents who are currently underrepresented on county juries.

Burgess’ most recent proposal to increase day one juror pay from $6 to $50 and to raise payment on subsequent days from $40 to $80 was denied by Commissioners Court in late March; the commissioners and Harris County Judge Lina Hidalgo cited a lack of available data to support the belief that increasing pay will lead to higher appearance rates.

Burgess told the Houston Press her office is working with county budget officials on a new juror pay increase proposal, and that while she believes Commissioners Court “is behind us on the issue,” a pay increase probably won’t be approved until the county moves out of NRG Park and back to regular operations downtown in the months ahead.

“They were very insistent that in order to track what kind of impact the pay increase is having, we need to get back to normal operations first,” Burgess said.

“We want to implement it on a pilot basis and track the results,” she said, “and then, if it does in fact do what we want it to do and we start getting that appearance rate and diversity rate up, then it would be implemented on a permanent basis.”

Burgess highlighted how studies have shown that diverse juries “take longer to deliberate, they get the facts straight, they challenge questionable assumptions. They make fewer inaccurate sentences, and jail sentences tend to be shorter when you have diverse juries.”

“So if people are about criminal justice reform, they need to show up and be a voice at the table so we can have fair outcomes,” she continued.
KEEP THE HOUSTON PRESS FREE... Since we started the Houston Press, it has been defined as the free, independent voice of Houston, and we'd like to keep it that way. With local media under siege, it's more important than ever for us to rally support behind funding our local journalism. You can help by participating in our "I Support" program, allowing us to keep offering readers access to our incisive coverage of local news, food and culture with no paywalls.
Make a one-time donation today for as little as $1.