DarkZero is a Houston-Based Esports Team That's Dominating the Competition DarkZero onstage during competition in Milan Photo by DarkZero Esports

On a quiet tree-lined street in Houston, somewhere in the Heights, a top-ranked professional esports team just dominated a regular season match to retain first place in their North American league.

"We're technically the only esports team in Houston," jokes DarkZero team owner Zach Matula. While the former energy and equities trader is poking friendly fun at Rockets-owned Clutch Gaming and Overwatch League franchise the Houston Outlaws, he is not, strictly speaking, incorrect. His Rainbow Six Siege team is the only professional esports organization with a full roster of players, team coach, ownership and supports staff living and working in Houston full-time.

All five DarkZero players and their coach, Jordan "BKN" Soojian, live in a gorgeous seven-bedroom house in the Heights. From the street, it's your average Houston mini-mansion — possibly home to a Med Center surgeon or oil company exec. Inside, however, is a full-blown, state of the art operations base. Part non-stop LAN party, part data center, part content creation hub. It's the stuff of gamer dreams. 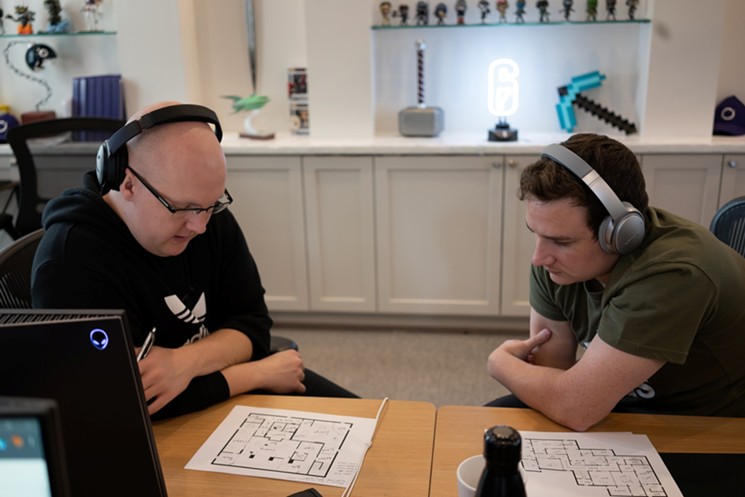 DarkZero players "BC" and "Mint" talk strategy in the team bullpen.
Photo by DarkZero Esports
While quietly gaining legitimacy by the day, the concept of esports and, moreover, e-athletes, still elicit more than the occasional eye roll from skeptical or downright derisive onlookers. Organizations like DarkZero, however, are challenging that stigma.

"Their day starts around nine or ten with a workout," says Matula, while his players are led through their morning workout by the organization's personal trainer. "They can spend up to 14 hours a day in those chairs," he says, pointing to the team's bullpen, a cluster of gaming PC's in the middle of the living room. The retired quantitative analyst and trader expounds on the importance of physical training regiments, not only for his players' well-being but as a competitive advantage. Another major advantage DarkZero enjoys; living together.

Already a standard practice for the dominant organizations in Europe and Asia, team houses are becoming more common in the growing ecosystem of American professional esports. While roughly half of North American teams have transitioned to the group living model, where players and coaches live and train together, most of those organizations are on the West Coast.

"We don't consider this a proper team house," explains Matula. "It's more of a facility. the difference is DarkZero actually operates out of the house as well." The team, and its house, have something of a silicon valley start-up vibe. The independent organization founded by Matula and his silent investing partner is less than a year old, but are ranked first in the North American Rainbow Six Siege Pro League with a record of 7-1-1. Team coach "BKN" talks to his players during a tournament in Milan.
Photo by DarkZero Esports
Not the biggest title in esports, Rainbow Six Siege is growing rapidly in terms of international popularity and professional legitimacy. In the first half of 2019 alone, Siege players have amassed over $2.4 million dollars in prize money — not to mention the tens of millions made by their teams from sponsorship deals, merchandise sales and revenue sharing with the game's developer Ubisoft.

If you've never heard of DarkZero, or for that matter Rainbow Six Siege, it's not surprising. The esports industry exists almost entirely online. While major titles like League of Legends and Overwatch host their matches in physical locations as big as stadiums, most titles don't carry that much clout in the offline world. Teams like DarkZero do occasionally travel for major tournaments, but stream their regular season matches from the same living room bullpen they train in.

"That's one of the challenges of esports," says Matula. "We've developed a really big fan-base in the year that we've been around, but it's really diffused. We've sold as much merch in Japan as we have in North America." While technically a Houston team, DarkZero isn't identified as such within the Rainbow Six Siege Pro League, where most teams are not regionally defined. Rather, organizations gain followings through a mix of performance and creative content creation — a critically important aspect of any team's long term success. 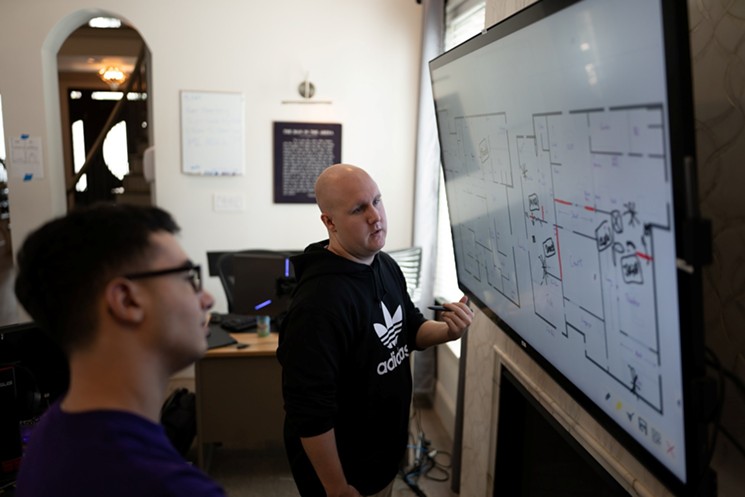 DarkZero players "BC" and "Hyper" work through game strategies in their team bullpen.
Photo by DarkZero Esports
While his players workout with their trainer, team coach BKN (pronounced "bacon") prepares to film the latest episode of his YouTube show, "Breakfast with BKN". The concept is simple, Jordan cooks breakfast in the team's impressive kitchen with a guest. In this case, a popular YouTuber who's staying with the team temporarily as a sort of content creating partnership.

"Performance times content equals success," says Matula, admitting that winning, alone, is not enough. Yet, despite his team's relative infancy, they seem to be doing well on both fronts.

This past Monday, DarkZero dominated last place Susquehanna Soniqs in an 7-1 rout (Siege matches are won in a best of 12 format where rounds last approximately three minutes). The month before, they generated more Siege related Twitter content than any organization in the world. By their own roughly outlined formula, they're hitting all their marks. Next step, league champions. Something Matula is, let's just say, confident about.

"This is the best team in North America."
KEEP THE HOUSTON PRESS FREE... Since we started the Houston Press, it has been defined as the free, independent voice of Houston, and we'd like to keep it that way. With local media under siege, it's more important than ever for us to rally support behind funding our local journalism. You can help by participating in our "I Support" program, allowing us to keep offering readers access to our incisive coverage of local news, food and culture with no paywalls.
Make a one-time donation today for as little as $1.