A shooting was threatened in two Houston schools this week. Photo by Marie via Flickr
Messages on social media threatening violence at two Cy Fair ISD schools on Wednesday night sent parents into a panic.

Principal of Cook, Martian Drayton, sent a message to parents at 10:57 p.m. 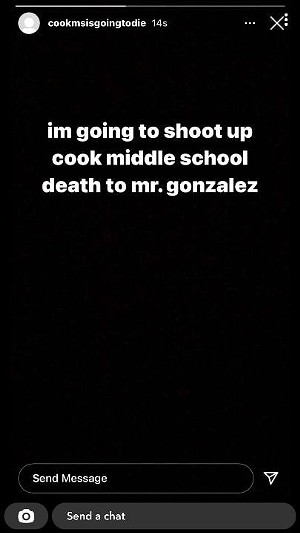 One of the threats posted online.
Screencap from SnapChat

“We have been made aware of rumors circulating on Instagram this evening. Our administrators are working with the Cy Fair police department to investigate and increase security measures on campus for tomorrow and Friday. Please continue to report the account through Instagram and refrain from reposting or sharing with others. The safety of our students is our top priority, and we appreciate all of our staff, students, and community who have reached out this evening.”


Jersey Village Principal, Maggie Wiley, sent out a message to parents a short while later saying that the poster had been identified. Both schools confirmed that the perpetrator, who they declined to name, would not be attending school on Thursday. Discipline was announced by Wiley to be handled by the district code of conduct, though law enforcement was involved in the investigation. According to morning announcements at Cook, the alleged perpetrator was arrested.

Several parents decided to keep their children home for the day in spite of the all-clear. One member of a school Facebook group said, “Part of me doesn’t want my son to miss school but my son’s and all the students’ safety is the main priority. Maybe closing the school tomorrow might not be such a bad idea.”

It’s just three years since another Houston school, Santa Fe High School, was the home of a massacre. Ten people were killed and another 13 wounded by a 17-year-old student with a shotgun in May 2018. One witness said the shooter had been a victim of bullying, though the school later denied this. A social media post from the alleged threatener in Cy Fair also mentioned bullies.

Cy Fair ISD will break for the Thanksgiving holiday starting this weekend.
KEEP THE HOUSTON PRESS FREE... Since we started the Houston Press, it has been defined as the free, independent voice of Houston, and we'd like to keep it that way. With local media under siege, it's more important than ever for us to rally support behind funding our local journalism. You can help by participating in our "I Support" program, allowing us to keep offering readers access to our incisive coverage of local news, food and culture with no paywalls.
Make a one-time donation today for as little as $1.