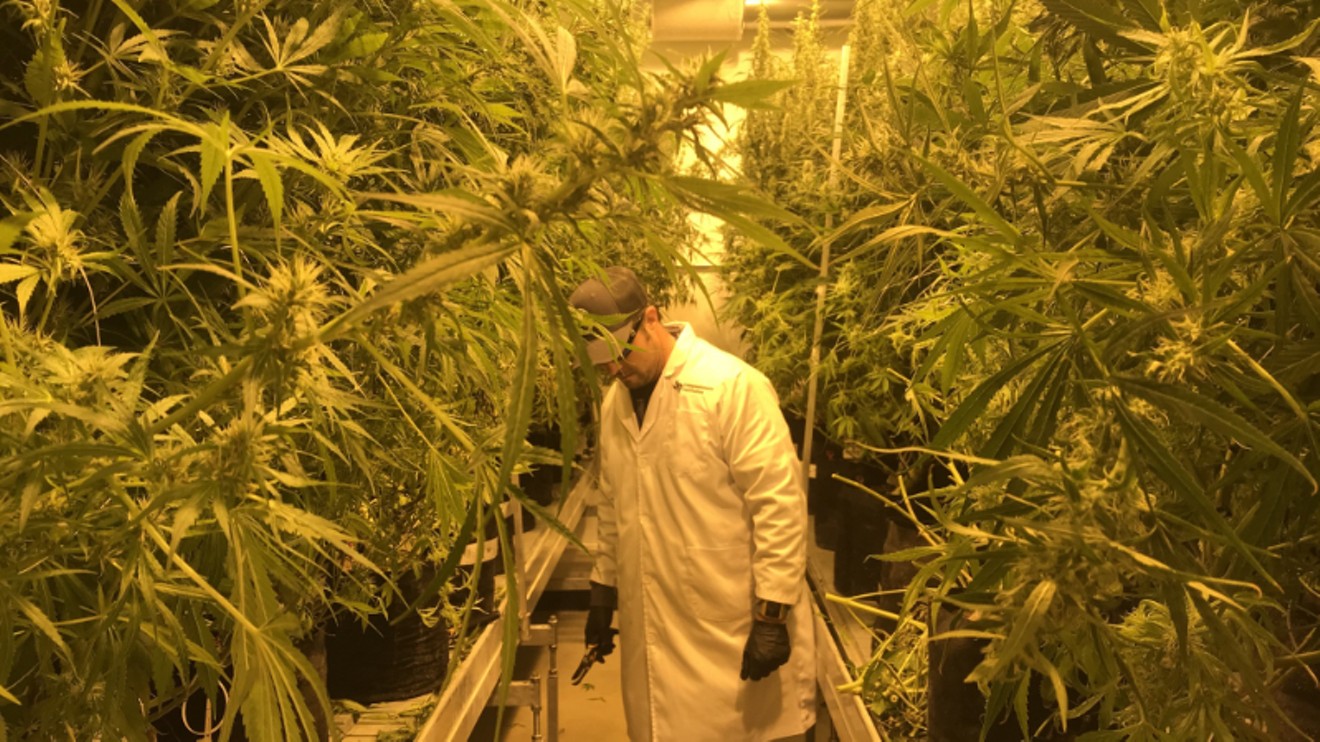 Several marijuana reform bills have been filed for next year's Legislature, but they all face a steep climb toward passing. Photo by Cory Garcia
For a state that’d probably vote to have Willie Nelson’s perpetually-stoned visage carved into a Lone Star Mount Rushmore, weed laws in Texas are still a sticky subject. Some Texas lawmakers are hoping 2021 will be the year the state could finally see some big changes to our marijuana laws; at least 14 bills have already been filed ahead of next year’s state legislative session that range from reducing penalties for possession to full-on retail legalization.

Despite the $4.6 billion-dollar hole left in the state’s budget due to the pandemic-induced downturn, it still seems unlikely that the most ambitious of these legalization proposals will blossom into state law, but marijuana advocates hope that Texas’s uncertain financial future could help make a convert out of Lt. Gov. Dan Patrick, the arch-conservative leader of the Texas Senate who’s killed bipartisan marijuana reform bills in past sessions.

One of the highest-profile bills filed ahead of next year’s legislative session was written by longtime state Representative Roland Gutierrez, a San Antonio Democrat who was recently elected to serve in the state Senate. His State Bill 140 would legalize recreational and medical marijuana use for all Texans over 21. Gutierrez estimates that if his bill were passed, taxes from retail sales of marijuana and licensing fees could add around $1.6 billion to the state’s bottom line every year, and would create 30,000 new jobs.

Gutierrez’s fellow Democrat, state Rep. Joe Moody of El Paso, filed a similar bill in the Texas House that would also fully legalize marijuana use for adults. It’s not just Democrats who support changing marijuana laws though: State Rep. Steve Toth, a Republican from The Woodlands, filed a bill that would take marijuana possession of two ounces or less down from a Class C misdemeanor offense to a Class C infraction, which wouldn’t come with the potential for 180 days of jail time like current state law allows.

Toth’s bill would bring state law closer to the policy in Harris County, where District Attorney Kim Ogg’s office implemented a marijuana diversion program back in 2017 that lets county residents caught with misdemeanor amounts of marijuana take a voluntary drug education class or pay a small fine instead of getting thrown in jail.

Marijuana, weed, pot, cannabis, whatever you want to call it, a majority of Texans agree that our state takes too hard a line against the leafy green herb.

And amid the ongoing national reckoning over systemic racism and the biases baked-in to our criminal justice system, the truth remains that Black people are arrested at higher rates than their white neighbors for marijuana-related offenses across the country, and the majority of people in prison because of pot are Black or brown.

But despite the growing consensus that strict pot laws are generally doing more harm than good, Texas still lags behind much of the nation when it comes to loosening the reins on weed.

“I tell you what: If we had ballot initiatives in Texas, where you can sign [a petition] and add something to the ballot, we would have probably been done years ago because it’s such a popular issue” said Jax Finkel, executive director of the Texas branch of the National Organization for the Reform of Marijuana Laws.

Marijuana has been fully legalized for recreational use by adults in 15 states across the country. Four of those states — Arizona, Montana, New Jersey and South Dakota — all passed statewide ballot propositions to legalize marijuana during the 2020 election.

Twenty-two additional states have legalized medical marijuana, including Mississippi earlier this month, and without the strict limitations on the herb’s level of THC (tetrahydrocannabinol, the plant’s key psychoactive ingredient) that Texas has in place for its comparatively limited medical marijuana program.

There’s been a little bit of movement toward loosening cannabis laws in Texas in the past few Lege sessions, though nothing close to what’s been done in much of the country.

In 2015, Gov. Greg Abbott signed the Texas Compassionate Use Act into law, which allowed approved neurologists licensed to practice in the state to prescribe cannabis oil with low levels of THC for patients with severe epilepsy. The prescription language is a point of frustration for cannabis advocates and Texan doctors who qualify to offer cannabis products to their patients, because “prescribing” any form of marijuana is still technically against federal law, as the Drug Enforcement Agency still classifies the plant as a Schedule 1 drug with “no currently accepted medical use.”

Every state except for Texas with some form of medical marijuana gets around that by following a loophole established in 2002 by the Ninth Circuit Court of Appeals, which ruled that doctors can’t be punished for “recommending” marijuana products as long as they don’t “prescribe” them.

In 2019, several other neurological conditions were added to the list of who qualifies for cannabis oil under the Texas law, but the language around prescribing vs. recommending was left unchanged. Luckily, it seems like the federal government hasn’t yet charged any Texan doctors who’ve prescribed cannabis with a crime, but the awkward and unnecessary legal gray area remains.

The Lege also voted in 2019 to legalize hemp, the type of cannabis that won’t get you high and is used to make all sorts of organic products from textiles to biodegradable plastic and soothing yet non-psychoactive CBD products.

The hemp law came with the unintended side effect of making it way more of a pain in the ass to arrest someone for pot possession, as it changed the legal definition of hemp to cannabis products with lower than .3 percent THC concentration without factoring in that most crime labs in the state didn’t have the proper equipment to test suspected contraband.

“Crime labs have trouble with funding no matter what, but they’ve been having to divert funding from processing rape kits and murder evidence to having to process these plants, and so clearly that’s not a good expenditure of our resources,” Finkel said.

Continuing to hit the dollars-and-cents angle, Finkel argued that Texas could save around $311 million per year just by not prosecuting low-level pot possession cases according to an analysis from national cannabis law and policy firm Vicente Sederberg LLP.

Last legislative session, Finkel said there were “Sixty bills having to do with cannabis in some form or fashion,” and she expects 2021’s session to see a similarly high amount of weed laws proposed, but acknowledged that longtime marijuana skeptic Patrick would need to come to Jesus on the issue for any real progress to be made.

Finkel explained that in 2019, two bills that would have decriminalized marijuana possession and expanded medical marijuana passed through the Texas House of Representatives with bipartisan majorities, but had their wings clipped by Patrick, who through his role as head of the Texas Senate refused to give either bill a full hearing.

While Patrick hasn’t shown any signs of evolution on his stance on weed, Gutierrez hopes he could change his mind over time as he has on gun background checks.

“The Legislature is a game of inches,” Gutierrez said, “and it’s also a place where opinions change over time, and I’ve seen the Lt. Governor’s opinions change on universal background checks, for example. Now he’s looking at closing the gun show loophole. I was very impressed by that, by his willingness to be able to see the light of day where he previously was at a different position.”

Gutierrez also hopes that skeptical conservatives like Patrick could be brought to the table on weed reform if they looked at the issue through a job-creation lens, especially when marijuana legalization isn’t out of the realm of imagination if Democrats can hold onto the presidency and can make strides in Congressional representation in the years ahead.

If federal legalization happens and Texas is still lagging behind on marijuana reform, Gutierrez thinks it’s safe to assume that big companies who decide to get into the pot business will turn to other states who already have the regulatory infrastructure in place to support the weed industry.

Ever the optimist, Finkel believes the popular support for reforming Texas weed laws means that we’ll get in line with more lenient states as time goes on, but in order for that to happen quickly, pot-friendly Texans will need to show up at the Capitol to make their support loud and clear.

“We have to go through the Legislature, and what we need is a lot of Texans to come out and have their voices be heard this session,” Finkel said, although she admitted how exactly that would happen is still unclear given how there’s still no plan in place for how the Lege will operate during the pandemic.

According to the Texas Tribune, Patrick has hinted to his colleagues that there’s a chance members of the public wouldn’t be allowed to enter the Senate chamber at all next session, and rules for citizen participation at the state Capitol have yet to be determined.

Even with the state’s projected budget shortfall, it still seems unlikely that Patrick will come around on marijuana reform quick enough to see sweeping legalization like Gutierrez is proposing make it through the Legislature in 2021.

Even though legalization would create a surefire way to raise wads of cash in state revenue without having to resort to unpopular measures like raising property taxes, Patrick has a history of putting his partisan convictions ahead of the state's bottom line. Just look at the case of the proposed statewide “bathroom bill” that would have dictated where transgender Texans could relieve themselves from 2017 that Patrick supported to the bitter end before it fizzled out, despite reluctance from Abbott to get behind it and an economic analysis that found the discriminatory law could have cost Texas $3.3 billion in annual tourism revenue.

Abbott has claimed to support reducing penalties for pot possession in the past, although he didn’t make any real attempt to strongarm Patrick into getting behind the decriminalization measure that failed to pass in 2019, but he’s definitely not in favor of full-on legalization.

Gutierrez just wishes that Abbott and Patrick would listen to Texan voters, most of whom think the Lone Star State is behind the times when it comes to marijuana.

“Here’s my big ask to the lieutenant governor and the governor and others who are naysayers on this piece, is listen to your electorate… it’s not the taboo that it once was,” Gutierrez said.
KEEP THE HOUSTON PRESS FREE... Since we started the Houston Press, it has been defined as the free, independent voice of Houston, and we'd like to keep it that way. With local media under siege, it's more important than ever for us to rally support behind funding our local journalism. You can help by participating in our "I Support" program, allowing us to keep offering readers access to our incisive coverage of local news, food and culture with no paywalls.
Make a one-time donation today for as little as $1.