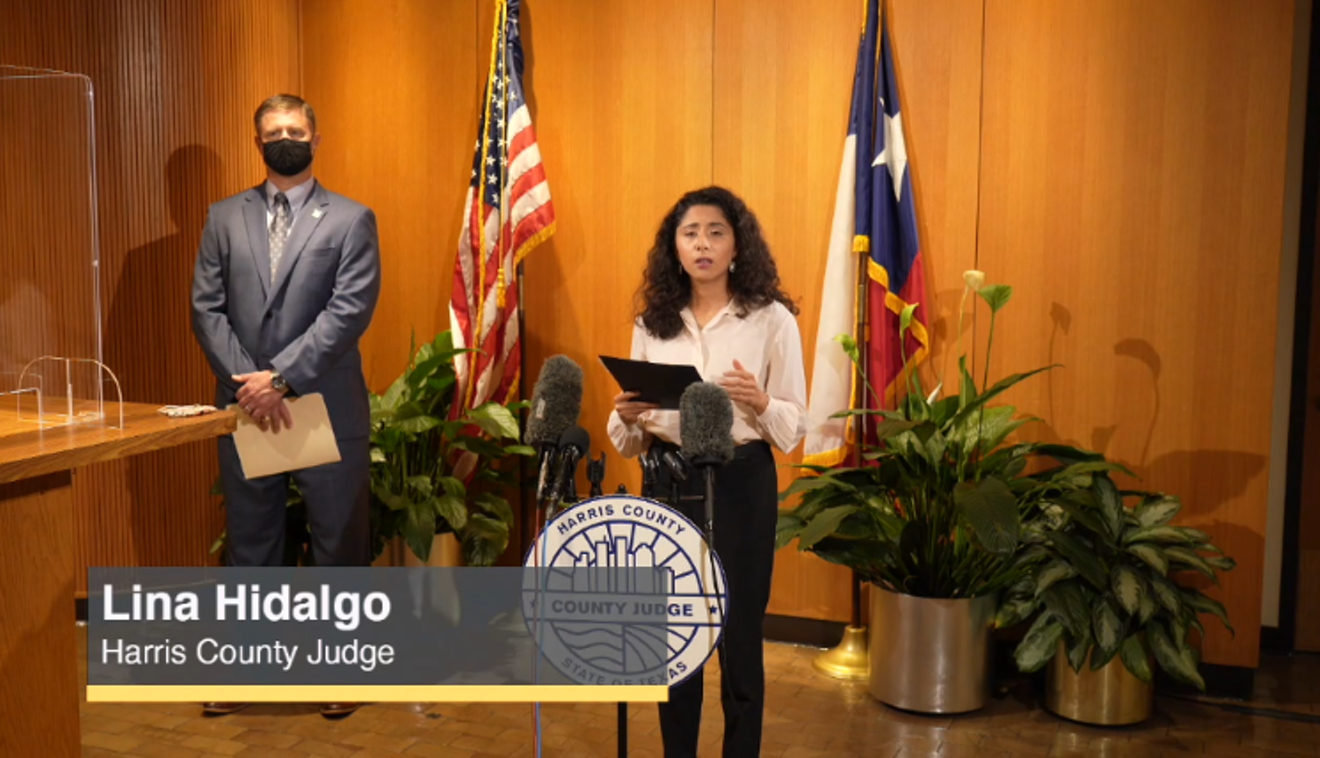 Editor's Note: This story has been updated to include a response  from HUD in which its spokesman denies that HUD determined that Houston and Harris County should not receive any of this round of Hurricane Harvey Mitigation Funds.

"The deck was stacked against us from the get-go."

That was Harris County Judge Lina Hidalgo's assessment at a Friday press conference in which she protested the criteria used to determine what counties and cities would get what share of the federal funds set aside as the Hurricane Harvey Mitigation Funds.

To date, Harris County has received none of the funds, she said. The county was expecting $1 billion in aid since it was so hard hit by Harvey in 2017 and had more deaths than anywhere else in the state because of the storm, but instead the money has gone to other cities and counties in Texas. Hidalgo said she is sending a letter to HUD Secretary Marcia Fudge asking for an audit and review of the criteria approved under the Trump administration. She also said she wants an assurance from HUD that Harris County will receive some of these funds.

"The issue is, Harris County was hit the hardest by Hurricane Harvey and we all know that," Hidalgo said. "I know that the storm wreaked havoc in other places as well but when you look at the sheer numbers — not just our experience — more than half of the around 300,000 structures that were damaged or destroyed across the state during Hurricane Harvey, were damaged or destroyed right here in Harris County,.

"Of the 68 total fatalities statewide from that catastrophe, 36 lost their lives right here in Harris County, more than half. That is why it is unconscionable for the community that was hit so hard by Hurricane Harvey to have received received zero dollars in Harvey Mitigation Federal Funds."

"Neither Harris County or the City of Houston are receiving any funds despite the fact that each of us submitted close to a billion dollars worth of project proposals," she said. She added that in the past, the city and county have received federal funding proportional to the impact any storm had on the region and the need for mitigation going forward. In expectation of the funds, Hidalgo said the county in expectation of receiving the funds committed a $2.5 million county bond to match the federal funds and are looking for other funding sources. "But we also need the federal government to do its part."  She said Houston Mayor Sylvester Turner was also working on a letter to HUD.

At issue are some individual categories that were added at the suggestion of U.S. Housing and Urban Development during the Trump administration that weren't at all advantageous to Houston. One made an assessment based on property values with more points going to areas with higher priced residences — tough for an urban center with plenty of low-income and multi-family housing, she said. Out of 10 possible points, Harris County scored a 2.

The other is the sheer size of the area. Dividing the number of people directly affected by a flood control project by the 4.7 million county residents, produced a much lower percentage of population affected. Out of this, Harris County scored a "less than 1" according to Russ Poppe, executive director of the Harris County Flood Control District. "So right there you're somewhere between 18 and 19 points at a disadvantage on two metrics that one could reasonably argue have no bearing whatsoever on the value or the benefits of the project."

Update 10:15 a.m. 5-24-21: HUD sent us a statement from its spokesman Mike Burns, in which Burns says it was the decision of Texas, not the federal government to not award any of these funds to Houston or Harris County.

“We understand the devastation that Hurricane Harvey had on the state of Texas, including Houston and Harris County. HUD has not prevented Texas from awarding CDBG-MIT funds to Houston or Harris County. The formula for allocation was created by the state of Texas. They have full responsibility and jurisdiction over who gets the money that was allocated to the state for flood mitigation, if HUD approves the action plan amendment, which has not been submitted or approved by the agency. We believe all areas of the state, including Houston and Harris County, should receive the resources they need to recover from Hurricane Harvey.”


Hidalgo said she met Thursday with representatives of the state's General Land Office (headed up by George P. Bush) and no one disagreed with her that Harris County and Houston deserved funds — especially considering they are coming from a department called Housing and Urban Development.

"I made clear to the GLO yesterday and they agreed that the criteria used to distribute these funds is unfair to Harris County," she said.

Another round of HUD mitigation funding is due to be awarded and Hidalgo stressed that while she wants to understand the criteria, what she wants more is to know that Harris County is getting federal funding to mitigate the effects of flooding which have occurred before and after Harvey.
KEEP THE HOUSTON PRESS FREE... Since we started the Houston Press, it has been defined as the free, independent voice of Houston, and we'd like to keep it that way. With local media under siege, it's more important than ever for us to rally support behind funding our local journalism. You can help by participating in our "I Support" program, allowing us to keep offering readers access to our incisive coverage of local news, food and culture with no paywalls.
Make a one-time donation today for as little as $1.