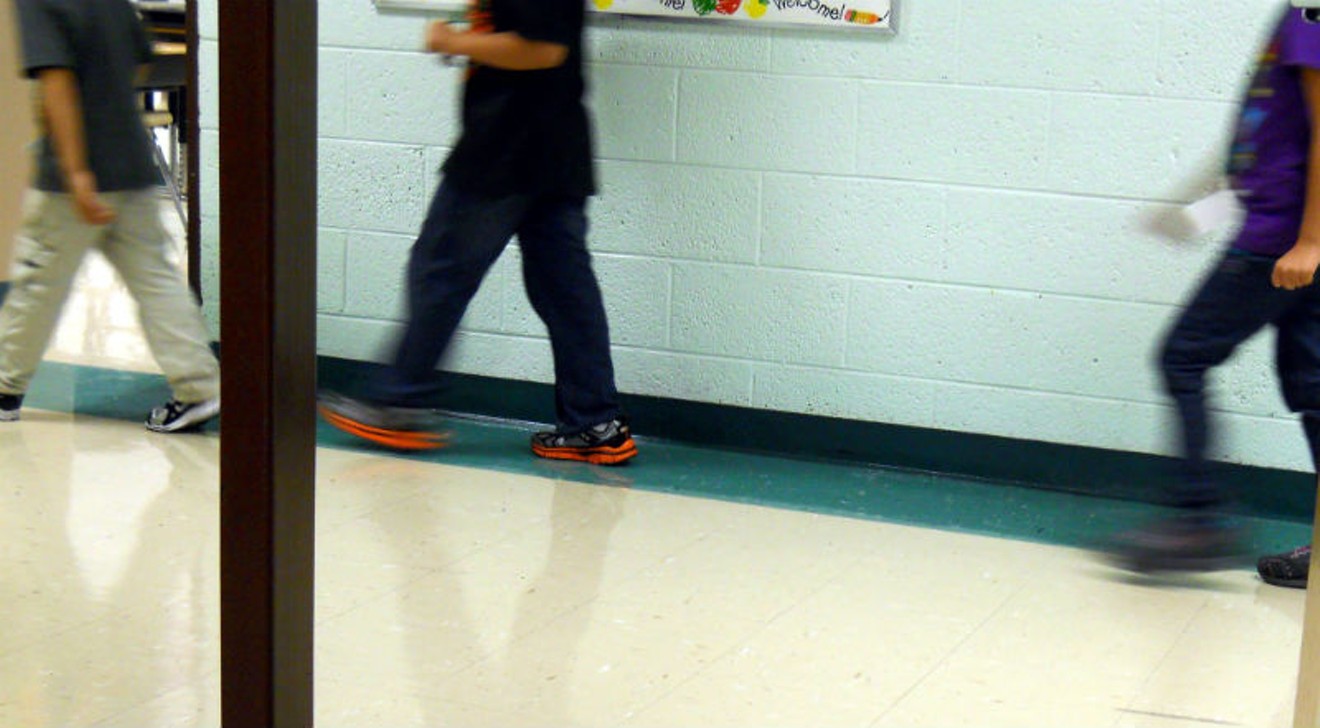 What conditions have to be in place for an assistant principal to think it is perfectly acceptable to use a permanent marker to color in the missing hair on a seventh-grader’s head? And for some parents to think that it’s no big deal and at worst, should be excused as a one-time error in judgment on the administrator’s part?

Those are the questions that many people are continuing to ask in the wake of the action taken by Berry Miller Junior High School Assistant Principal Tony Barcelona who in April found Juelz Trice’s haircut to be in violation of the school’s dress code and gave him the choice of in school suspension or the permanent marker cover up. Juelz chose the marker option and had to have help filling in the hair design. The boy’s parents did not learn of the action until after their son arrived home from school.

The school district issued a statement saying it did not approve of what Barcelona had done and placed Barcelona on administrative leave, but he was reinstated after just a short while. His actions did nothing to disrupt the plan for him to become the school’s principal next school year, replacing the retiring Kim Brooks.

The questions raised by what happened to the African-American seventh grader are increasingly important in a district where, according to a 2015 Civil Rights Data Collection under the U.S. Department of Education, while African-American students make up 15 percent of the student body, they account for 30 percent of the disciplinary actions. Critics say African-American students are not only disciplined out of proportion to their numbers, but that they and other students’ cultural and religious differences are often not dealt with by any degree of sensitivity by school district employees.

The Houston Press asked to speak with Barcelona and Assistant Principal Crystal Felix in general about the questions of alleged racial insensitivity, with some specific cases cited. Several days later its request was denied by Kim Hocutt, Executive Director of Communications, for PISD. This was the statement she released:

“As you are aware, public school districts cannot provide information on confidential personnel or student interactions. It is clear through your previous article(s) that you have attempted to attract any and all individuals who might claim mistreatment or discrimination. In so doing, you have presented one-sided allegations without any school district, including ours, able to adequately respond. None of the incidents you have conveyed to us are accurately or fairly represented and thus your intended article may constitute a basis for further legal action by the organization or individuals harmed.”

Meanwhile, Barcelona has received support from the community via Facebook posts as well as a change.org petition created by Suzann Whitlow, a math teacher at Berry Miller Junior High who created the petition while he was on administrative leave and has collected 873 signatures thus far.

Whitlow, who did not respond to Houston Press requests for comment via Facebook Messenger and email, wrote on the petition page, “This letter is being written simply to implore Pearland ISD administrators to not allow media attention and public pressure to outweigh the years of stellar service to the students and parents of this district that Mr. Barcelona has given.”

However, not all teachers share Whitlow’s high opinion of Barcelona. Evan Blanks, who taught at Berry Miller Junior High in the 2017-18 school year, says in at least one incident, student punishment decisions were not even-handed. On January 8, a student brought alcohol in a water bottle into his classroom— the alcohol was discovered soon after when the student fainted during lunch period

Of the five students involved, Blanks says one white student, whose parents are lawyers and made a visit to Barcelona, got off without punishment. An Asian American student and another white student were both sent to Pearland ISD’s Alternative Learning Academy for 30 days and were the first ones back. Blanks says the white student responsible for supplying the alcohol, as confirmed by video surveillance, received a juvenile charge, and returned to class second. And the African American student, who was sitting on the opposite side of the classroom when the alcohol entered the room, spent about 60 days in ALA.

Blanks says he had several run-ins with Barcelona on his own right and took his complaints to Principal Brooks. Earlier in the year, Blanks had asked Brooks that Barcelona be removed as his Texas Teacher Evaluation and Support System appraiser, and it was approved.

Blanks says he took his continuing complaints to Brooks, to the district’s Human Resources department and to area superintendent David Moody. He says Moody never acknowledged the racial allegations Blanks brought forth against Barcelona. David Moody and Teresa Davis, a certification officer within Human Resource told him he would be able to keep his job until the end of the year, but it wasn’t a right fit, Blanks says.

Barcelona was not the only administrator cited by parents as having a different system of justice for black students.

One African-American mother of a student at Miller said a racially-charged shoving match four years ago that began after a white student called her son the N-word, ended up with her son receiving an in-school suspension, while the white student was given a 30-minute lunch detention.

According to the woman’s son, all Felix asked about the fight that ensued was ‘Did he say Nigg-a or Nigg-er?”

“I expect others to be treated in the same way, what’s fair for one is fair for all,” the mother says. “The problem is when you are the investigator, the prosecutor, the judge and the jury all at the same time, you are going to get [evidence] that aligns with what you think.”

For the last two years, Pearland ISD school board member Mike Floyd has proposed an end-of-year evaluative process that students and teachers would participate in, and would be anonymous. It would look at how students are being graded, how campuses are being run, and how discipline measures are being implemented.

“We love hearing great things about our schools, but arguably, hearing the less pretty side of what’s going on is the most helpful thing,” Floyd says.

His fellow board members have hesitated to give students the opportunity to grade their principals, and Flood readily acknowledges the possible pitfalls in that process. “They might not do it nicely,” he concedes. “But I think we could have a process where if there were outliers we could easily find them by running them through a statistical environment.” He said he plans to bring up his proposal again.

“The entire principle is built around campus leaders having the proper judgment to make sure they are developing students in a way that we would be proud of. If the administrators are making decisions that they shouldn’t be making, and if there is a history of intolerance then that calls into question everything we are doing. We can’t expect our students to be held up to a higher standard than our principals,” Floyd says.

In the wake of the permanent marker incident, on May 21, parents voiced concerns to the school board during its regularly scheduled meeting. The next day, the dress code was amended for the 2019-2020 school year and while words like “carvings” were removed and an exemption for religious headwear was added, many feel a lot more needs to be done.

On May 23, PISD issued a statement that a diverse committee of school administrators, teachers and parents had met multiple times since April 1, to evaluate and amend the dress code. They sought to, “simplify the current dress code, provide more versatility, and identify and remove any perceived racial, cultural or religious insensitivities.” The new committee will continue to evaluate the dress code annually, according to the statement.

Dr. Dona Kim Murphey, the Pearland parent who issued the press release on May 20 on behalf of like-minded parents, is pleased with the district’s reaction, but holds out for more positive change.

“I am happy with the changes to the dress code that eliminate dehumanizing language and ostensibly create the space for clothing worn in accordance with diverse religious practices. I continue to be wary about the language that leaves administrators with ultimate authority without transparency or accountability for enforcement. One major concern is that the dress code is used to over police Black students.”

Murphey proposes the committee also collect data on the race of students disciplined for dress code violations. She wonders who exactly is on the committee and why that information isn’t made public as well. “Why does the district insist that it can manage all issues internally under the cloak of secrecy rather than work with its diverse (and importantly dissenting) community of students and parents in a publicly accountable way?”

In a Facebook post on May 14, School Board President Charles Gooden, Jr. proposed expanded “diversity training” in the future. Currently, the district has yearly, mandatory, video-based training on the subject.

Floyd believes in restorative justice and that people, especially students, be afforded second chances, though on the matter of Barcelona he stated, “I don’t believe he should be an employee within this district any longer, that decision [to be made principal] wasn’t made by the board and that’s my personal, moral belief.”

Blanks, who initially spoke out about the Trice incident on Facebook, noted later in an interview, “Why would he [Barcelona] have the confidence to even think of doing something like that [to Juelz Trice] if he hasn’t been doing this for a long time and getting away with it?”
KEEP THE HOUSTON PRESS FREE... Since we started the Houston Press, it has been defined as the free, independent voice of Houston, and we'd like to keep it that way. With local media under siege, it's more important than ever for us to rally support behind funding our local journalism. You can help by participating in our "I Support" program, allowing us to keep offering readers access to our incisive coverage of local news, food and culture with no paywalls.
Make a one-time donation today for as little as $1.