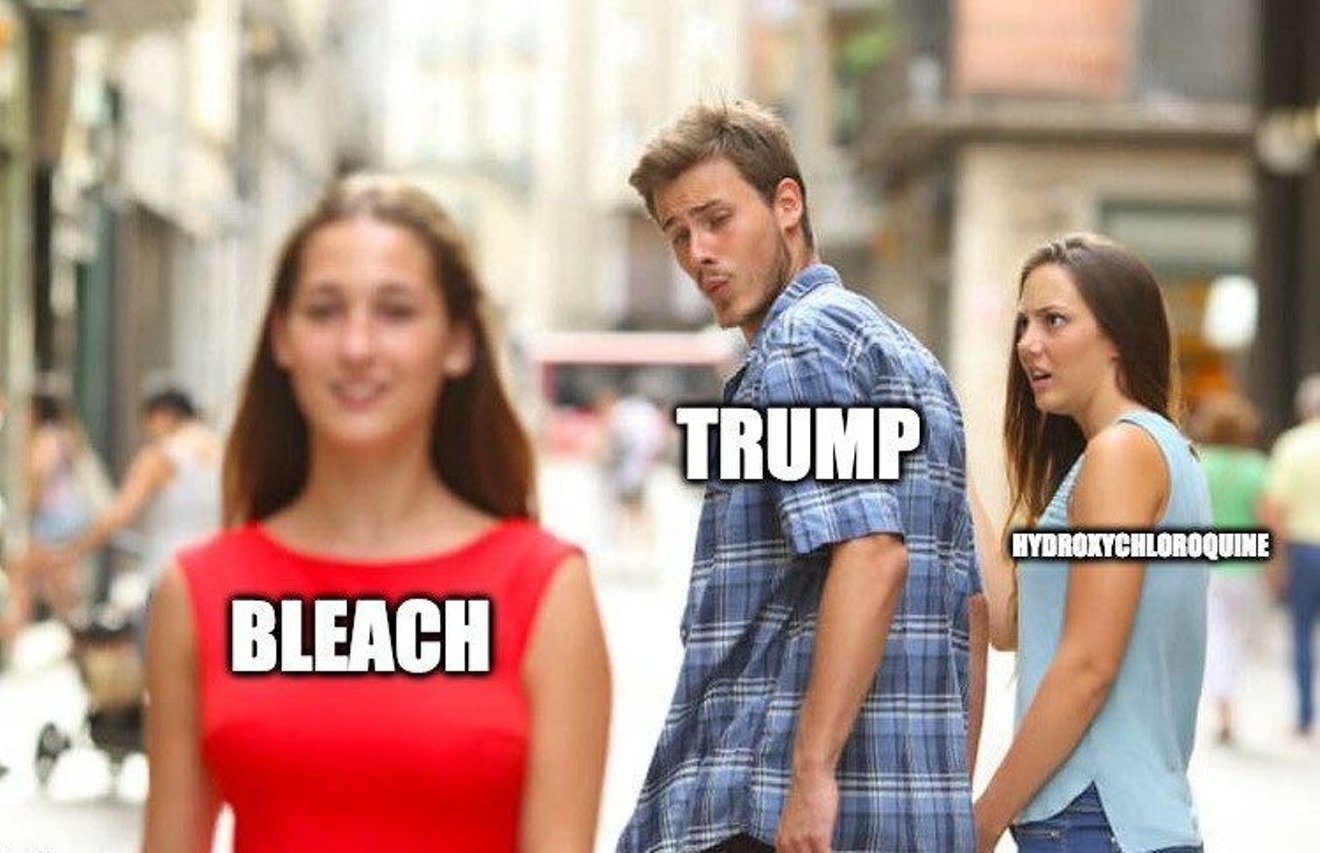 The meme game has at least been on point. Meme from a collection by The Daily Dot
President Donald Trump is being dragged over the coals for suggesting that people drink bleach to protect themselves from the coronavirus COVID-19. Thing is, he did not actually say that. All he did was heavily imply to a desperate population in the middle of a pandemic in a country where millions don’t have access to healthcare that quack medicine might be the answer. That is more than enough to be a horrifying misuse of power even if he did not explicitly recommend we down bleach.

The second that the idea of using disinfectants to fight the disease came out of Trump’s mouth, I immediately started to wonder if it was connected to the Genesis II Church, a noxious con started by Jim Humble (who claims to be a billion-year-old space god) that says their Miracle Mineral Supplement (MMS for short) is a cure for everything from malaria to autism. MMS is and always has been bleach. That’s what the FDA has said multiple times. It does not cure things, whether you drink it or use it as an enema like Kerri Rivera has suggested people do to their kids even when it literally starts removing bits of their innards.

The Genesis II Church's activities caused some havoc here in town. One ardent follower of their program, Jennifer Hollis, killed herself in 2016 after MMS failed to cure her of what she was convinced was Lyme disease. Our own Craig Malisow delved into the strange world of the cult and their local representative, Shane Hawkins, who is also deep into the Freeman-on-the-land conspiracy teachings to judge by his court filings. A Harris County District Judge ruled that Hawkins was no longer allowed to sell chlorine dioxide in 2017.

It turns out that members of the Genesis II Church, including Mark Grenon, have been making direct overtures to the White House. Ed Pilkington of The Guardian found that Grenon had written to the president saying that chlorine dioxide would rid the human body of COVID-19. Several days later, Trump repeated those claims in his typical, garbled fashion.

It's also worth noting that QAnon, the rabid pro-Trump conspiracy that is convinced the president is sending coded messages detailing his fight against a secret Satanic/pedophilia cabal of leftists, has been extolling the benefits of drinking bleach to fight coronavirus since January. Trump definitely knows who Qanon is, having retweeted content of theirs before.

Coincidence? It’s certain possible, but Trump has already shown that he is willing to listen to con men over scientists even as the coronavirus claims more American lives than fighting in the Korean War did. His adherence to the efficacy of hydroxychloroquine mixed with azithromycin is the perfect example. In controlled studies, there has been no significant benefit to using the drug combination, and quite a bit of evidence showing that it can be fatal to a fairly large portion of the population. One study from Brazil literally killed 14 percent of its patients and had to be halted.

Trump became enamored of hydroxychloroquine thanks to the sudden fame of lawyer Gregory Rigano, who tweeted a link to a paper he co-authored that said the drug was 100 percent effective against coronavirus. He also touted himself as “an advisor to the Stanford University School of Medicine,” which Stanford was quick to say he absolutely is not. Once Rigano had become a Fox News darling spreading the good news about hydroxychloroquine, Trump became an apostle of the miracle drug despite all evidence that it is at best mildly beneficial and at worse will kill people. People taking Trump at his word has already resulted in one death after a man drank aquarium cleaner.

The president is susceptible to and a willing spreader of dangerous quack nonsense. Whether he tells people to drink bleach or not, he is obviously pulling from sources that threaten lives with their scams. Problems also escalate because of what I call the Godwin Hole.

Godwin's Law is a famous internet adage that states "as an online discussion grows longer, the probability of a comparison involving Nazis or Hitler approaches 1." The Godwin Hole is like a black hole in the online space, but instead of sucking up all matter it only affects conspiracy theories and bigoted nonsense. As these become trapped in the spiral, they grow together approaching singularity. Anti-vaxxer ideas mesh with Hawkins' right-wing Freeman nuttery and QAnon madness, sucking up anti-fluoride, anarch-capitalism, bigotry, and New World Order stuff along the way until every separate bit of ridiculousness is atomically linked to the other. I'll give you an example below.

You've probably seen this meme in response to Trump.
Screengrab from Facebook
Here’s a very common meme I’ve seen floating around Facebook lately. It purports that Trump was actually talking about ultraviolet therapy, and it’s accompanied by a picture of a patient with an IV receiving futuristic-looking magic light medicine. Like a lot of quack shares, the implication is that people are just too blinded by ideology to understand that some groundbreaking science is being done.

The share I saw came with a link to Oxygen Healing Therapies, a page that literally opens with a legal disclaimer saying that nothing on it is approved for medical use or treatment of disease. The section on ultraviolet therapy praises the work of William Campbell Douglass (whose name the page misspells), who wrote about it in the 1990s. Douglass also wrote about how drinking hydrogen peroxide would cure AIDS, is an anti-vaxxer, thinks smoking tobacco has health benefits, and is a founding member of the fringe anti-fluoridation group Fluoride Action Network.

In Houston, George Allibone of the Houston Wellness Clinic was personally trained in the practice of ultraviolet blood irradiation therapy by Robert Rowen and Terri Su according to their website. In 2017, Allibone was charged by the Texas Medical Board for violating the standard of care and keeping inadequate records in connection with his treatment of three patients, and the website QuackWatch says he offers “dozens of unscientific approaches to Lyme disease, cancer, and many other conditions” at his facility.

I don’t know if Trump has personally been skimming through the murky parts of the web where drinking bleach and trying to make your blood magic with UV light are the answers to everything, but it’s impossible to ignore that all of this moves in the same circles within the ever-deepening Godwin Hole. The fact that so many of supporters are standing ready with memes about how he actually meant a different quack remedy entirely is proof of that.

He’s already had notorious quack medicine peddler Mehmet Oz brought into his inner circle and has been spouting anti-vaccine rhetoric since 2012. Whether Trump is himself a consumer of quack medicine and the work of con men or he’s just mildly regurgitating what he remembers when those people go on Fox News doesn’t really matter, just as it’s not terribly important that he didn’t literally say “drink bleach for a cure.”

What matters is the head of the federal government during one of the great crises of the twenty-first century is immuno-compromised when it comes to bullshit dressed up in Big Sister Science’s clothes. And he is gradually infecting us all.
KEEP THE HOUSTON PRESS FREE... Since we started the Houston Press, it has been defined as the free, independent voice of Houston, and we'd like to keep it that way. With local media under siege, it's more important than ever for us to rally support behind funding our local journalism. You can help by participating in our "I Support" program, allowing us to keep offering readers access to our incisive coverage of local news, food and culture with no paywalls.
Make a one-time donation today for as little as $1.