Joined in an afternoon press conference by Dr. David Persse of the Houston Health Department and Memorial Hermann hospital system CEO Dr. David Callendar, Turner urged Houstonians to remember that “As the holidays approach, traditional large gatherings with extended family members and friends are simply not safe at all this year,” imploring that residents stick to only celebrating Thanksgiving with household members.

“We want that message to be loud and clear. This virus thrives on gatherings, and will take advantage of holiday festivities to sicken our loved ones and our community,” Turner said.

Turner also announced that the city’s annual Thanksgiving Day parade has been officially cancelled, and will be replaced by a free food distribution event at NRG Park this Saturday in partnership with H-E-B.

The Houston Health Department on Monday reported 141 new cases of COVID-19 and two additional deaths within the city, putting Houston’s cumulative case total at 90,239 and the city death toll at 1,298 since the beginning of the pandemic. As of Monday afternoon, the total number of coronavirus cases across all of Harris County had hit 159,406, and the countywide death toll had reached 2,360. 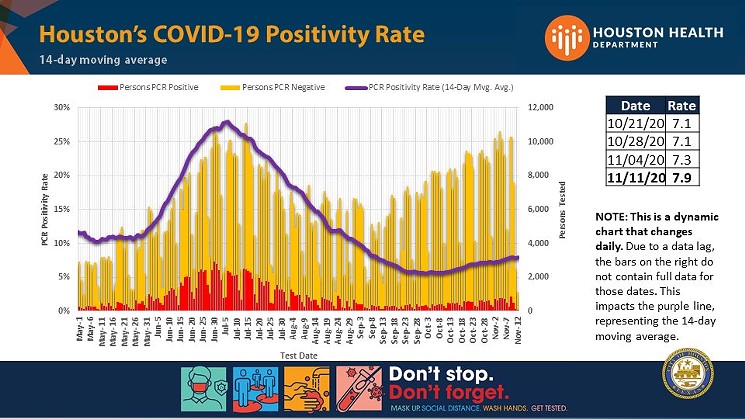 Houston’s COVID-19 test positivity rate continues to climb from its previous low point of 5 percent in early October. As of this past Wednesday, the local 14-day average positivity rate had jumped to 7.9 percent across the city, Turner said.

Persse also warned that while coronavirus hospitalizations in Harris County aren’t nearly as high as they were at the pandemic’s last peak back in July, they’re still on a worrisome uptick. As of Sunday, 8.8 percent of hospital patients within Harris County had COVID-19 according to the Southeast Texas Regional Advisory Council.

“Just six days ago, it was about 6.4 percent...the numbers of hospitalized [coronavirus] patients are starting to creep up again,” Persse explained.

Due to these trends, Turner once again explained that it’s mandatory to wear face masks in public in Houston as allowed by Gov. Greg Abbott’s statewide mask mandate, and that Houston Police Department officers are authorized to issue $250 tickets to residents who refuse to wear face-coverings.

Turner explained that since the local mask fine was announced in early August, HPD officers have been instructed to issue a warning the first time someone is caught without a mask in public and that fines upon future infractions were allowed, but he hinted Monday that he’d spoken with HPD Chief Art Acevedo about cracking down on enforcing mask use within the city.

“We prefer to warn people only, but we are at the point that we need to be more forceful with our message, and help people understand the danger in which they are putting themselves and everyone else in this city when they do not wear a mask,” Turner said.

Callendar said that if Houston residents are still dead-set on visiting loved ones in person this holiday season, they should limit those gatherings to ten or fewer people and gather outside if at all possible, and stressed that all Houstonians need to follow Turner’s warnings about wearing masks, maintaining social distance and scrubbing those hands of ours if we’re going to have any chance at reversing the troubling pattern in our local coronavirus numbers.

“We can stop the surge which seems to be building if we follow the mayor’s advice,” Callendar said.
KEEP THE HOUSTON PRESS FREE... Since we started the Houston Press, it has been defined as the free, independent voice of Houston, and we'd like to keep it that way. With local media under siege, it's more important than ever for us to rally support behind funding our local journalism. You can help by participating in our "I Support" program, allowing us to keep offering readers access to our incisive coverage of local news, food and culture with no paywalls.
Make a one-time donation today for as little as $1.