Filomena and Frank Pepe in the kitchen of their New Haven, Connecticut restaurant. Photo from screen shot/What Were We Thinking Films
Pizza. It’s probably the most beloved – and often simplest to make – food on the planet. You’ve probably had a slice or several in the past week. Or you’re thinking about it now. And for you kids, according to analytics it’s the “Most Instagrammed Food,” beating out burgers 10-to-1.

But while many casual Pie Lovers might assume that Pizza Mecca is found in New York, New Jersey, Chicago, or even Italy (where they didn’t even have tomatoes until 1565 – a gift from the King of Peru!), true gourmands known it’s actually in New Haven, Connecticut. 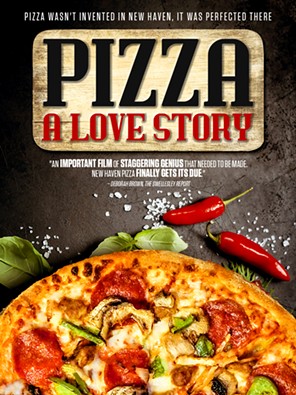 The story of Holy Trinity of Pizza and the families behind them is told with mouth-watering detail in the documentary Pizza, A Love Story. And while COVID-19 has scuttled plans for all the in-person screenings, it will be available on DVD and VOD beginning September 29.

Director Gorman Bechard has just finished a documentary on the band the Replacements (Color Me Obsessed) and was looking for his next subject.

“My wife told me I should do something I was passionate about. Like pizza. She would always bust my ass about what a pizza snob I was!” he laughs. “You have no idea. When I start talking about it, people walk away because I’m lecturing them. I think there are three pizza places on the planet. Period. Everything else is crap.”

With varying pre-existing relationships, Bechard approached the owner families of Pepe’s, Sally’s, and Modern, and all agreed to participate once the filmmaker’s bona fides were checked out. “Everyone was ridiculously cooperative,” he says. Bechard actually lives in Hamden – just minutes outside of New Haven – so he had easy access.

The documentary sets some “ground rules” about New Haven pizza. First, it’s not burnt – it's charred. That gives the pies a unique taste while leaving diners with telltale black marks on their hands and fingers. Next, it’s not pizza, it’s “apizza” (pronounced “ah-beetz”). Just as mozzarella is “mootz.” Finally, a "plain pie" is just bread and tomato sauce, with maybe a sprinkling of grated cheese on top. There's also plenty of talk about ovens.

This writer of 100 percent Italian descent has more than a modicum of interest in this topic. I was born in New Haven and lived there until I moved to Houston at the age of 8. But much of my family on both sides still reside in the Elm City, and of course no visit back over the past 43 years was complete without sampling the offerings of at least one of these pizzas. The last time we visited New Haven, my family was introduced to perhaps Pepe’s most famous dish, the white clam pizza.

Though he's owned Modern Pizza since 1988, Bill Pustari started out shoving pies into hot ovens in his early 20s.
Photo from screen shot/What Were We Thinking Films
So I asked my relatives and family friends – some of whom have spent their entire lives in New Haven — to declare their  favorite of the three. There was a clear winner.

• Cousin Linda Popolizio Kuperstein: “Modern. That’s for locals.”
• Michelle Grego Mayo: “Modern. You know it’s good New Haven pizza when the crust can stand alone or just a plain sauce with grated cheese is good.”
• Elaina Grego Weiser: “Modern. Growing up in New Haven, every neighborhood had an amazing pizza place so we rarely went to Wooster street because we didn’t need to!”
• Auntie Laure Loffredo: “Modern. All their pizzas are good, no matter what variety.”
• Uncle John Loffredo: “Modern. Great pizza and better variety outside traditional toppings. But John and Maria’s is better than all of them.”
• Uncle Larry Ruggiero: “Sally’s. Plain, no mootz. My father used to bring Sally’s apizza home on Friday nights.”
• Cousin Jim Chiarelli: “First, I reject being forced into the Pepe’s/Sally’s/Modern choice. I’d say Sally’s – the char is what makes it great. But overall, I’ll take Zuppardi’s!”

Flo and Salvatore Consiglio at Sally's.
Photo from screen shot/What Were We Thinking Films
And for one source - a certain Billy Grego — he can finally come clean with a deep, dark secret of his. As the statute of limitations for any potential prosecution has likely passed.

"Sally’s is the best in my opinion," Grego offers. "It was once impossible to call Sally’s with an order because they would not pick up the phone. So they had a 'blind line' only a chosen few had access to. My brother Angelo, being a New Haven cop, had access to it. All the cops and firemen used that number. Sally's picked up the phone, no questions asked, and just took your order. Of course, I had the number and used it when needed."

The film also mentions Sally's "private line" (which also shows a clip from The Simpsons where it appears on a bank of Mr. Burns' phones).

For Bechard's personal preference, he straddles a line. “I lean toward Sally’s for a plain pizza. But when it comes to cheese, it’s Modern.”

As Pizza, A Love Story notes, “New Haven Style” pizza places have opened up across the country and as far away as Belize. And Chicago’s Piece Pizza – offering New Haven pizza in the heart of the Home of Deep Dish, is the most successful independent pizza place in the United States.

A parade of locals, tourists, food journalists/bloggers/vloggers, politicians, locals, chefs, and celebrities also rave onscreen about New Haven pizza – and sometime pick favorites. Singer Michael Bolton, a native of the city, recalls being surprised after a concert in London’s Royal Albert Hall to find a spread of Sally’s pizza backstage. It had been driven from New Haven to New York’s JFK airport, and then flown on a plan to England.

Frank Sinatra was also a Sally’s aficionado, forming a friendship with Tony Consiglio. The Sultan of Swoon never forgot how the family refused to let him pay when a then-struggling Sinatra brought in bandmates from the Tommy Dorsey Group after a local gig. Henry “The Fonz” Winkler gives a huge thumbs up to Pepe’s – which he ate plenty of while a student at Yale. Pepe’s was also a frequent stop for Yalies Bill and Hillary Clinton – with Bill making both campaign-related and informal returns there.


Ironically, the very first person you see onscreen at the start of the documentary is...Houston/Klein native Lyle Lovett, espousing his love of Pepe's and pizza in general.

"Anyone who would use the phrase 'It's just pizza' is beyond hope," he offers. "If you haven't been to New Haven and had Pepe's, Sally's, and Modern, you can't really talk about pizza with any authority." And what soft drink goes best with New Haven pizza? A cool one in a glass bottle of local Foxon Park soda.

But the documentary is about more than just food. Via archival footage and photos, Bechard weaves in the city’s history, immigration, Italian culture, race riots, and the urban renewal of the mid-20th century that destroyed a lot of the old neighborhoods. Though part of the Wooster Street where Pepe’s and Sally’s are located a dough’s throw across from one another was spared just because of their presence.

“Women and immigrants are why we have pizza. And there is no New Haven without pizza. Take away that, and we’re just Bridgeport with an uppity university,” Bechard sums up. “Two hundred years from now, we’ll look back at the history of New Haven, and they won’t talk about Yale. They’ll talk about pizza and Louie’s Lunch. Abso-friggin-lutely!”

Pizza, A Love Story will be available on DVD and VOD on September 29. For more, visit WhatWereWeThinkingFilms.com
KEEP THE HOUSTON PRESS FREE... Since we started the Houston Press, it has been defined as the free, independent voice of Houston, and we'd like to keep it that way. With local media under siege, it's more important than ever for us to rally support behind funding our local journalism. You can help by participating in our "I Support" program, allowing us to keep offering readers access to our incisive coverage of local news, food and culture with no paywalls.
Make a one-time donation today for as little as $1.