Punk rock and skating for a good cause Art by Ben "Catfish" Perez, courtesy of Cory Worden

Cory Worden and his family - wife Jessalyn and daughter Quinn – have regularly made a point of honoring Jonah, the son and brother they lost to Hypoplastic Left Heart Syndrome two years ago this month. Twice a year, the family has marked Jonah’s 18 months of life with some notable event or effort. As they considered how to commemorate Jonah this spring, they recalled the challenges of being a family with a loved one with a congenital heart defect.

“We had spent the previous 18 months struggling to be in the pediatric intensive care unit with him, be with our daughter at home and work to keep up with the bills,” Worden remembered. “As we went through this, there were people and organizations that we worked with who help in these situations, so we resolved after Jonah passed away that, for each of his birthdays and 'angel days,' we'd do something in his honor to pay it forward.”

Worden wanted the gesture to be big and helpful, too, so he turned to some communities he knows can help meet that objective. As event organizer of this weekend’s For Kids' Hearts Punk Rock Show + Skate Jam at Southside Skatepark, he’s relying on Houston’s punk rock and skating communities to help raise funds to support families with child heart patients.

“I thought about the things that have been important to our lives, besides our family, and immediately knew that we wouldn't be who we are without Houston music and it's scene,” said Worden, who is also the longtime drummer for Latch Key Kids, Houston’s veteran “positive punk” progenitors. “I've been going to and playing shows since 1993 and actually met my wife one night at Fitzgerald's in 1997. We've been very fortunate to know and keep in touch with so many in the city, region and even around the country.”

The bands that committed to the Sunday afternoon event are mostly friends, Worden said, but also noted, “I think I wrote on a Facebook post that ‘these are some of the best bands in the history of ever' and I truly mean that. I'm excited to see them all.” The full roster includes headliners 30footFALL, Say Hello to the Angels, Dead to the World, Idle Déclassé, Fat By the Gallon and Animosity, a band Worden also plays in which is reuniting just for the show.

Some of the bands are further and forever connected to the Worden family through unfortunate circumstances involving their own loved ones over one difficult weekend. Worden said the same weekend they lost Jonah, the world lost Chris LaForge, the beloved 30footFALL guitarist. A lifelong friend, Seth Hart of Animosity, lost his father, Rob, the same weekend, Worden said.

“It was absolutely devastating,” he said of that weekend. “Back in the late ‘90s when 30footFALL would tour for months at a time, Seth connected Chris with Rob to work at his machine shop when Chris was in town, so we all knew each other well,...and, we had lost our son Jonah, Chris and Rob in the same three days.

“I wondered if we could put together a show. Rubio (Cisneros) with 30footFALL has always been a great person, mentor and friend alike, and he immediately offered to put on 30footFALL. I can't say enough about how special 30footFALL is and has always been. From there, I reached out to other bands that have been involved, supportive and positive presences over the past 25 years.”

Worden offered the sort of preview of the day’s music that only a longtime peer and fan could provide.

“Say Hello to the Angels is from Austin and is made of former members of Riddlin' Kids - Animosity used to play shows with them in Houston and Austin in the late ‘90s - Rubberhed and The Buzzkillers,” he said. “The guys are great and the band itself has always supported positive causes. Dead to the World, from here in Houston, has always been a positive presence and did several shows with Latch Key Kids when I was with them; also, Mikey Seals, (DTTW guitarist), goes back with us to the mid-90s and has always been supportive.

“Idle Déclassé is from Austin and is made of former members of Teen Cool, from Houston, and The Urgencies, as well as other bands. Those guys have been involved with us and supportive since 1993 and immediately offered to get involved,” Worden continued. “Fat By the Gallon is from Dallas and always offered to be involved with Latch Key Kids when we were there. They've since gone on to do shows with much bigger bands like The Descendents and Bad Religion and literally just got home from a Europe tour, but are still happy to come down to play and support.”

“I'm excited the Animosity guys were willing and able to do a one-off set after a 20-year break. I love the melody and intensity of Fat by the Gallon, Dead to the World and Say Hello to the Angels. I love the classic, 'desperation' sound of Idle Déclassé just as much as I love The Replacements. And, of course, 30footFALL holds a special place in my life and heart. I'm fortunate to know them, to have played shows with them, to have played shows for them and to still be in touch with them,” Worden said.

“For the venue, knowing that Fitzgerald's was closing and that all proceeds would be directly routed to the nonprofit causes, I realized that I had been talking to Eric ('Big-O' Visentin) at Southside Skatepark/Skateshop for quite a while, if only because I'm a skateboarder,” Worden said. “He immediately offered the park for the show and, being that Southside is a highly reputable skatepark with amazing ramps, ledges, bowls, and more, I thought to extend the event from only a punk rock show to a punk rock show with skate jams in between the bands.”

“Over the past year or so before that, I had also been casually talking to Josh Stewart at Theories of Atlantis, a force in core street skateboarding distributing brands such as Theories, Polar, Hopps, Magenta, Isle and more,” Worden said. “So, again, I floated the idea to him about Theories of Atlantis sponsoring the skate jams and he immediately offered to send prizes to those shredding the skate jams.”

With those pieces in place, Worden said they are ready to help kids and families in need. All internal expenses are being covered so 100 percent of the day’s proceeds can be donated. 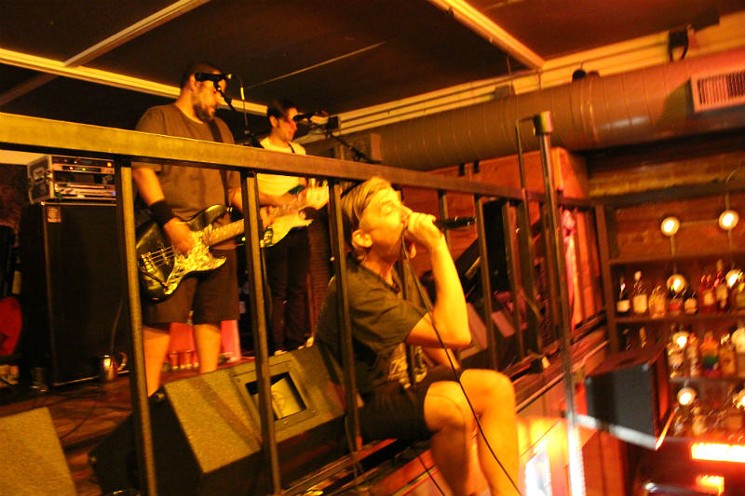 “With this event, we'll be passing on benefits to the actual PICU for supplies needed to take care of the kids in their care; Hayden's Heart, a nonprofit who helps families with children with congenital heart defects with costs such as travel and lodging -a big deal with many traveling here to Houston to the Texas Medical Center - and also provides services to help families should a child be lost; and, Bo's Place, a Houston nonprofit facility that provides many services including group therapy to families who have lost children,” said Worden.

In the past, his family spearheaded a drive to gather pediatric chairs and care packages for pediatric intensive care units. He said the challenges range from simple things like gathering mobiles for the babies laying in PICU cribs to the complex, like finding funds for travel to and from surgical procedures and helping with emotional support groups after familes suffer a loss.

“Between the three organizations we're working with, we hope to help with each of these areas,” he said. “Seeing 'heart babies' navigate their circumstances is truly harrowing and seeing them do it with smiles is truly inspiring. Likewise, seeing their families stand by them through the months/years and multiple hospitalizations, ER visits and more is harrowing, inspiring and heartbreaking all the same.”

Worden said admission pre-sales are available with options for $10 tickets or open donations. Donations can be submitted via a PayPal at heartshowhouston@gmail.com. Commemorative t-shirts - one from Ben 'Catfish' Perez from Flying Squid Tattoo and Art Gallery and one from Joey Salinas, former guitarist for Houston legends Sprawl - as well as screen-print posters from Tony Kaelin at Kaelin Custom Printing are all being sold for $10 each at an event merch table.

“Ultimately, we'd love to generate a beneficial amount for the nonprofits we're helping and truly hope to, but we haven't put a hard number on it,” Worden said of the fund raiser's monetary goals. “We want people to enjoy the music, the skateboarding and raise awareness for the cause.”

For Kids' Hearts Punk Rock Show + Skate Jam, Sunday, May 26 at Southside Skatepark, 510 Iowa Street, South Houston. Doors at 1 p.m. and music starts at 1:30 with the Animosity reunion set. $10 suggested donation, all ages.
KEEP THE HOUSTON PRESS FREE... Since we started the Houston Press, it has been defined as the free, independent voice of Houston, and we'd like to keep it that way. With local media under siege, it's more important than ever for us to rally support behind funding our local journalism. You can help by participating in our "I Support" program, allowing us to keep offering readers access to our incisive coverage of local news, food and culture with no paywalls.
Make a one-time donation today for as little as $1.