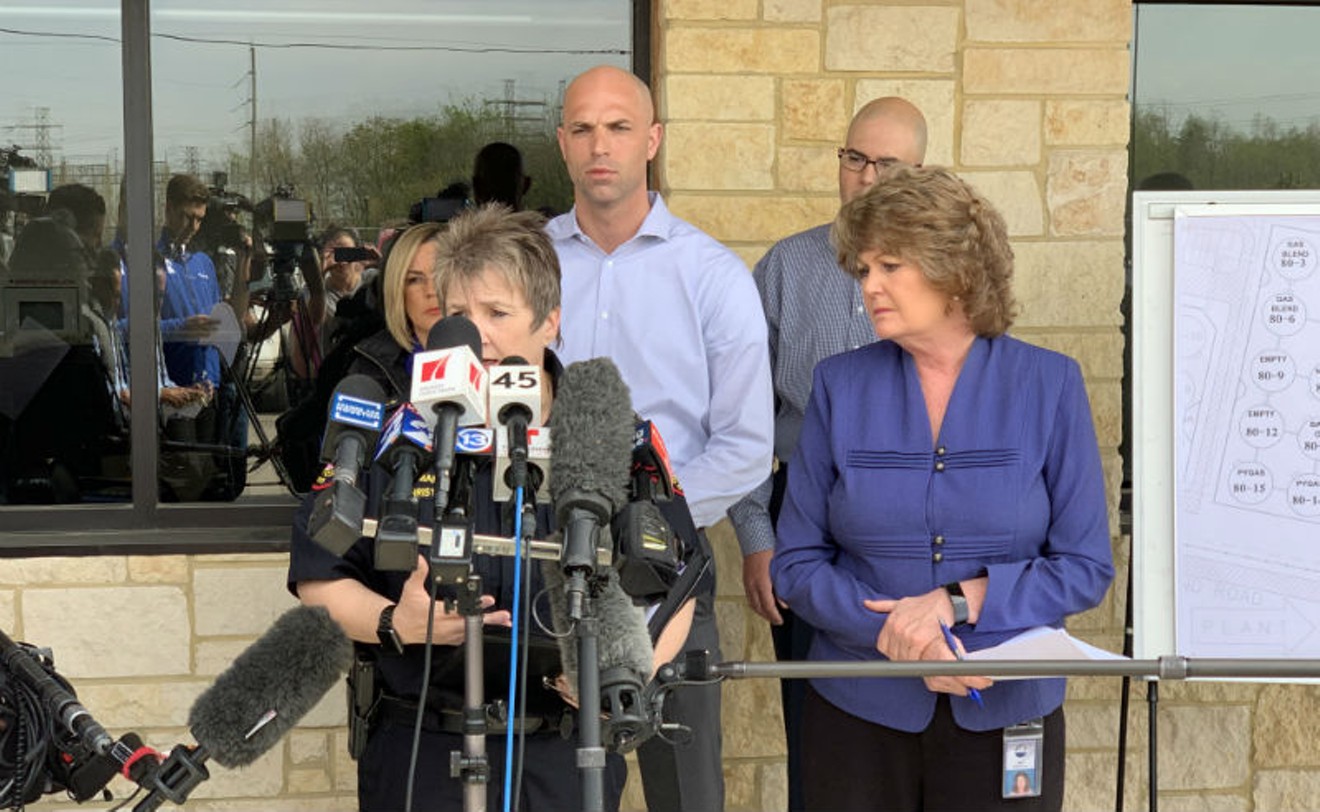 Fire Marshall L. Christensen reports they don't have a time frame on how much longer the fire will burn. Photo by Kate McLean

The Intercontinental Terminals Company plant fire has overtaken an additional two gasoline tanks overnight, the company reported at a morning press conference Tuesday while officials expressed hopes that the wind does not change.

The two new tanks contained pyrolysis gasoline, a highly aromatic naphtha product which is a byproduct created during ethylene and propylene production. The news means that ten tanks have burned; eight with a variety of chemicals in them and two others which while empty, caught on fire and collapsed.

The fire spread due to a loss of water resources between the hours of 4 p.m. and 10 p.m., officials said. Two fireboat pumps supplying water to the scene experienced malfunctions.

Wednesday morning, Houston ISD released a statement that its schools will remain open. "However, as a precaution, outdoor practices and activities in the immediate area of the Deer Park industrial facility are cancelled." Also Wednesday morning, the Houston Chronicle was quoting an unidentified worker as says the fire may have been started when a tank overheated and a safety valve did not shut that down.

On Tuesday Fire Marshall L. Christensen could not give a time frame as to how much longer the fire would last.  Asked if ITC expected any explosions,  ITC spokeswoman Alice Richardson stated, "At this point in time, we don’t anticipate any explosions, the news that I got as I was walking out the door appears to be a positive approach going forward. We’re hoping the wind stays the way it is.”

Asked for confirmation on the close proximity of the fire to LPG propane lines. David Wascome, ITC senior vice president of Operations stated: “We do have LPG lines on the property, but all the LPG lines in that vicinity have been evacuated. We did that two days ago.”

So far, the substances within the affected tanks include: gasoline blend, Xylene, Naphtha, oil and now Pyrolysis gasoline.  There are five remaining tanks in the same area that have not yet caught on fire  — two contain oil, two the pyrolysis and one toluene.

Richardson said they cannot be certain that the five remaining tanks won't burn as well before this is over. “I cannot say with a degree of certainty, I can say the conditions that they are applying to those tanks, we are doing everything humanly possible to protect them, and to protect all of our communities and our people.  [Inside command] does not believe they are going to explode or catch on fire at this point in time.”

Though the fires have spread, the Tuesday press release for ITC continued to maintain as it had the day before that "regarding air quality, all detections recorded by [the independent consultant] CTEH [Center For Toxicology and Environmental Health] were below levels that would represent a public health concern."
KEEP THE HOUSTON PRESS FREE... Since we started the Houston Press, it has been defined as the free, independent voice of Houston, and we'd like to keep it that way. With local media under siege, it's more important than ever for us to rally support behind funding our local journalism. You can help by participating in our "I Support" program, allowing us to keep offering readers access to our incisive coverage of local news, food and culture with no paywalls.
Make a one-time donation today for as little as $1.