Dear Yankees: Texas Does Not “Deserve” This Pictured: This Photo by Michael Vadon via Flickr
Conservatives have a point when they say that liberals are smug. It’s certainly not exclusive to us if the number of bad memes featuring Sam Elliot are anything to judge by, but the left often does get orgasmic when it comes to watching red states fail. That’s become clear over the past several weeks as a host of voices tutted about the state of our power outages and the recent re-opening order of Governor Greg Abbott. What else can you expect when you poor rednecks keep voting in Republicans like Ted Cruz?

I’d like to invite y’all to sit on a snake. Maybe it will bite you since reality appears to not be adequately doing so.

First, let’s do some math. In 2020, 5,259126 Texans voted for Joe Biden. That is more than voted period in 43 other states. For comparison, 6,006,429 Californians voted for Donald Trump. Yes, Biden won the Golden State by nearly two-to-one, but that is still an awful lot of red hats once you get outside of liberal cities. As I have pointed out before, Texas has a huge number of liberals in it. We just happen to have slightly more conservatives.

We are trying to change that, but it’s very, very hard. Every time there is a redistricting (and don’t forget the next one is nigh), dedicated groups of Texas activists end up fighting Republicans all the way to the Supreme Court to try and undo discriminatory gerrymandering. That’s not even counting the long wars that conservatives have waged on marginalized voters here that makes change difficult. Here in Harris County, voter roll challenges even include the homeless. There is a giant machine that is actively resisting change that could be made simply by voting out Republicans.

And yet, we do. In 2018, Texas flipped a lot of seats including the District 7 and the Harris County Judgeship to new liberal darling Lina Hidalgo. I’m at a loss how Yankee liberals can fawn over her and not see that her ascension was only possible because dedicated Texas liberals have spent decades slowly transforming the state. We do this even as the wins come rarely and at great cost.

It’s especially rich coming from people who do not seem to realize how dirty their own backyard is. Yes, the Texas legislature is backing another obnoxious secession bill, but it was only last year that California Governor Gavin Newsom was advocating his own nation-state. Nor would it be the first time California has flirted with secession. In fact, there is a whole Wikipedia page dedicated to schemes from California to either secede or break the power of the Democrats through splitting the state up. Most of these ideas come from the conservative minority. 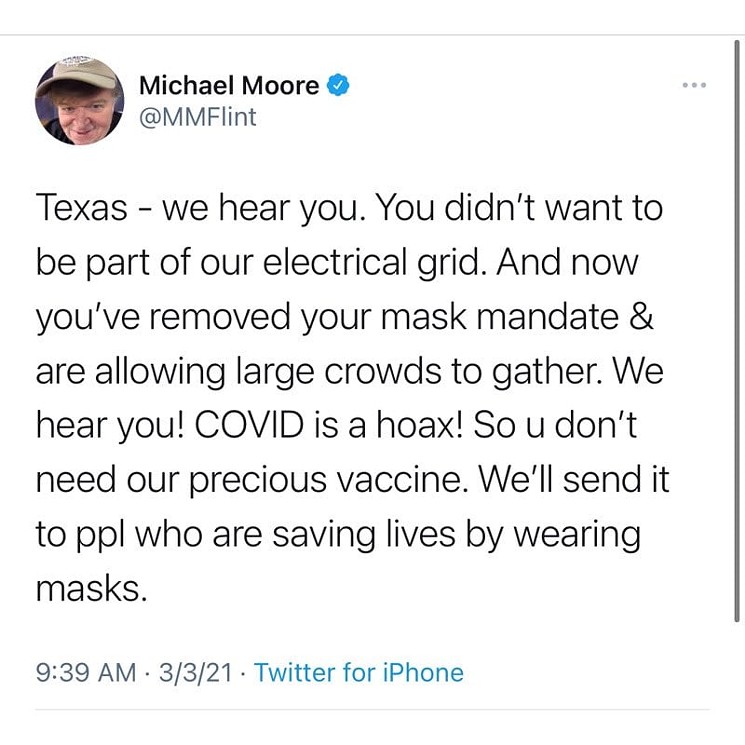 Michael Moore can shut up now.
Screencap from Twitter

That’s not even counting the full-on right-wing insurrectionists in the state, which are far more common and organized than the ones in Texas. Robert Evans explained in the podcast It Could Happen Here how very easily rural malcontents and terrorists could cripple the state and possibly even the country by destroying food transportation lines. California was well represented at the recent insurrection attempt at the capitol.

The country’s liberal bastions often mask significant conservative and even outright fascist populations, but they don’t seem to get the same tsk tsk tsk that we do. Oregon is as blue as they come, and it’s also home to some of the most violent white nationalist groups in America. There’s a reason Oregon has been ground zero for antifa activity. It’s because they have a lot of damn fa to anti against.

Or look at New Hampshire. If any state is going to be the first to break the two-party system it will probably be New Hampshire, and it won’t be a break to the left. Unhinged libertarianism has become a hallmark of the state, to the point that there’s a really good book about the unfortunate consequences. New Hampshire has been flirting with becoming an Atlas Shrugged theme park for years, but is still popularly presumed to be one of those safe, hippy-dippy places where the great socialist leap forward is well underway.

In every state, there are dedicated people trying to hold back catastrophe. It goes double in the South where so much of our population is people of color essentially living under occupation. We still fight no matter how fruitless and thankless it often is, and the only reason that Yankee liberals get to look down on us is because they happen to outnumber their own regressives just enough to keep the lights on. Don’t be surprised if that changes while you’re busy congratulating yourselves on being better than us.
KEEP THE HOUSTON PRESS FREE... Since we started the Houston Press, it has been defined as the free, independent voice of Houston, and we'd like to keep it that way. With local media under siege, it's more important than ever for us to rally support behind funding our local journalism. You can help by participating in our "I Support" program, allowing us to keep offering readers access to our incisive coverage of local news, food and culture with no paywalls.
Make a one-time donation today for as little as $1.