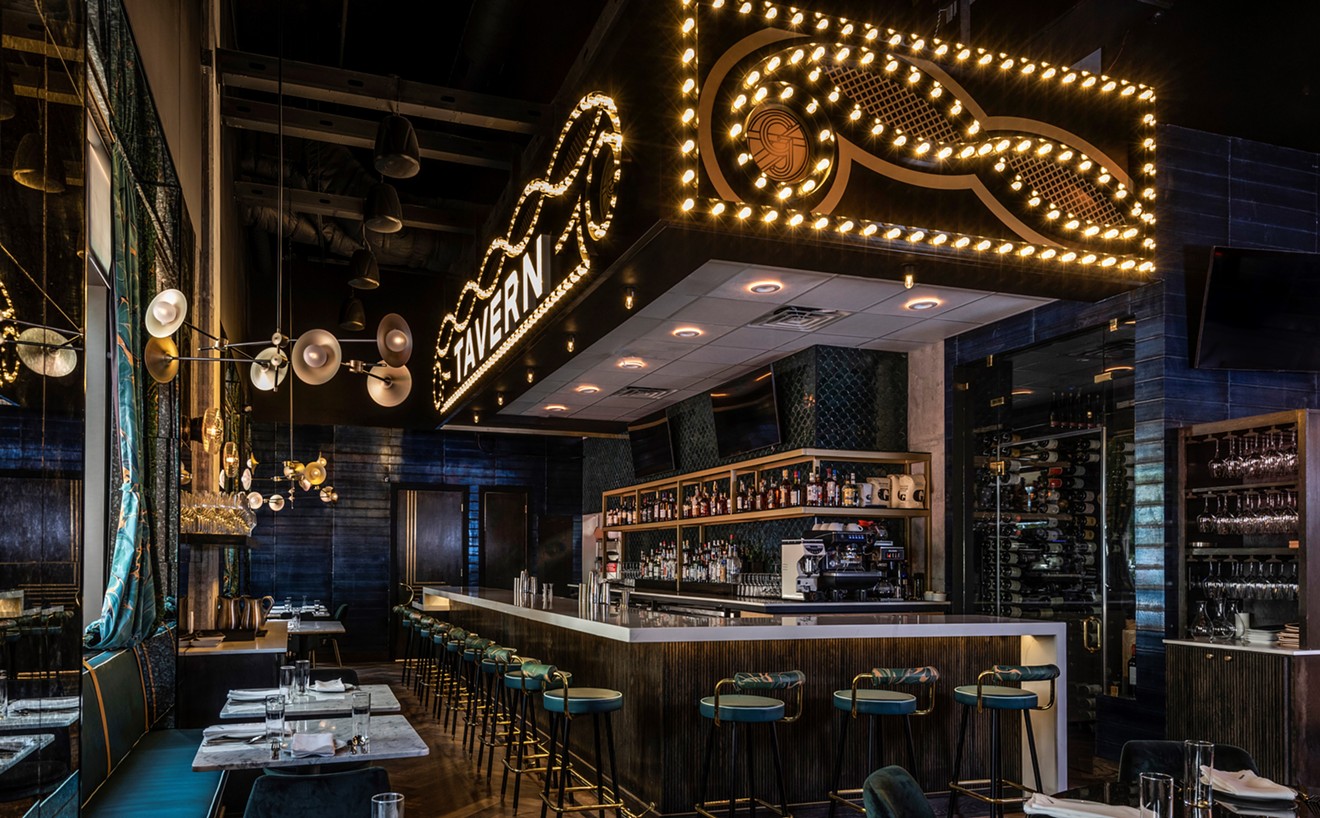 It's always big news when one of Houston's best chefs opens a new restaurant and the news can't get much bigger than James Beard Award Winning chef Chris Shepherd's debut of his new Georgia James Tavern at the luxury hi-rise Market Square Tower, smack dab in the middle of downtown H-town. The restaurant is being touted as a more casual offshoot of his steakhouse Georgia James, one of now six concepts under his group Underbelly Hospitality, which also includes co-owners Todd Mason, Jeff Lindenberger and Fred Baca.

In a press release, Shepherd, the always busy culinary star, said, "I love Georgia James. But I understand that it's not a restaurant most people can visit on a daily or even weekly basis. Georgia James Tavern is designed to be a place where our guests want to-and can-eat every day". Considering its location at Market Square Tower, that might be the case for those residents. Sandwiches and salads are part of the more casual approach.
Photo by Claudia Casbarian
The new concept will carry on the philosophy of sourcing that has made Underbelly Hospitality's restaurants consistent in quality, along with a team of strong, young chefs, talented bar staff and restaurant crew that reflect the high standards of their leader. Shepherd is known for his compassionate mentorship which earns him  loyalty and respect from his team even when they fly from the nest.

Matthew Coburn is not going back to Tally.
Photo by Julie Soefer
One of those who have blossomed under Shepherd's tutelage is Matthew Coburn, better known as "Tally" to his compatriots due to his having grown up in Tallahassee, Florida, where he also began his culinary career. In 2016 he came to Houston for several staging stints and eventually moved here, working at Shepherd's now-closed first concept, Underbelly. Working with Shepherd, Coburn has learned to revere the farmers, ranchers and growers who provide the quality ingredients for Underbelly Hospitality's concepts. Recently, Coburn has worked at Georgia James as sous chef. Now, he is taking on the role of chef de cuisine for Georgia James Tavern. He says, "We want to build a sense of community with this restaurant strengthened by our relationships with local farmers and ranchers and the simple, technique-driven menu will reflect those relationships." 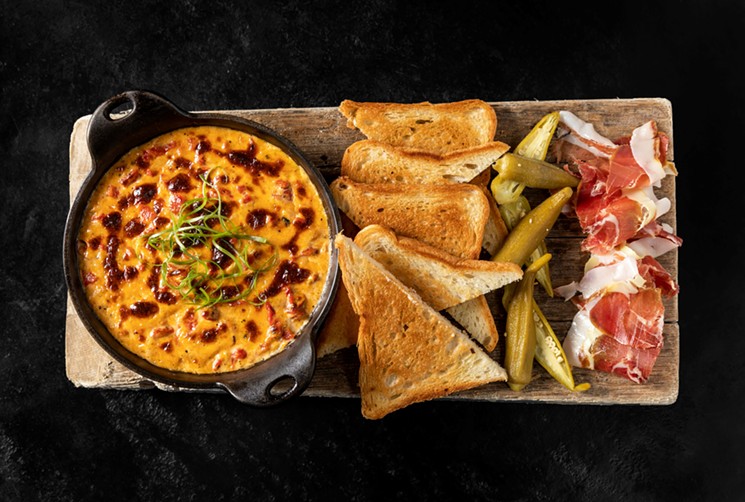 Baked Pimento Cheese is a tasty starter.
Photo by Julie Soefer
That menu includes sandwiches like Javi's Club, a tribute to Underbelly Hospitality's longtime butcher, Javier Salvador. As with any Underbelly Hpspitality restaurant, guests can expect a hyper-focus on quality ingredients. There's no run-of-the-mill deli meat here. Javi's Club is filled with turkey breast that has been brined overnight and then smoked. The sandwich also includes ham made from pork shoulder that has been brined for nearly two weeks, rubbed with molasses before being smoked as well. Other sandwiches include Tally's Cuban with mojo roasted pork, a Grilled Chicken Sandwich with gochujang aioli and the Tavern Burger made with 44 Farms ground chuck and something called smoked onion fancy sauce. And we thought Shepherd was keeping it casual.

Besides sandwiches, there are entrees including a Cast Iron Seared Wagyu Ribeye ($85), Hearth-Roasted Gulf Fish and Ham-Brined Berkshire Pork Chop. The wood-burning oven at GJT will also turn out a Hearth-Roasted Chicken with coconut sticky rice and green papaya salad and Hearth-Roasted Oysters. 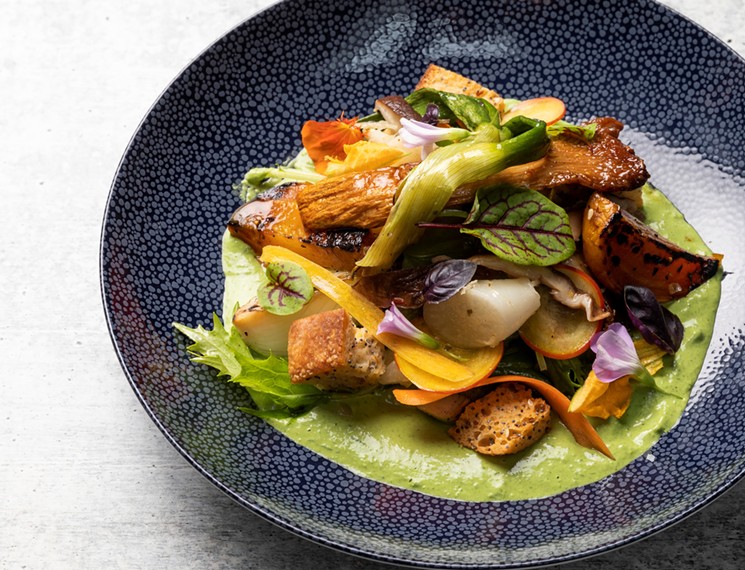 The Tavern 7 Salad is a veggie feast for the eyes.
Photo by Julie Soefer
Salads are not an afterthought at the restaurant. The options include the Slab Salad, iceberg lettuce topped with Shropshire blue cheese, Benton's bacon and black pepper buttermilk. The Warm Spinach Salad gets glammed up with Lone Star oyster mushrooms, Granny Smith apples, red onion and shaved Parmesan. The Tavern 7 Salad has "everything spiced" croutons, seven farm vegetables and Green Goddess dressing.

Underbelly Hospitality's renowned pastry director, Victoria Dearmond, has created the pastry program, putting to good use the wood oven with her Hearth-Baked Apple Crumble, a twist on the apple pie at its sister steakhouse. There are more sweet treats like Chocolate Pecan Pie Cake and the Elvis Cookie made with peanut butter, banana and bacon. Get on your High Horse at Georgia James Tavern.
Photo by Julie Soefer
Westin Galleymore is Underbelly Hospitality's spirits director and he will oversee the cocktail and spirits program at GJT while wine director Matthew Pridgen has curated a wine list that is similar to the one at Georgia James but smaller in scale.

The tavern is located on the ground floor of Market Square Tower and its Art Deco-inspired decor fits with the  building in which it is housed. Designed by Nest Interior Design Group, the interior is dark and cozy with glamourous Old Hollywood touches such as marquee lights around the bar and vintage-style glass wall sconces that are hand-blown. The clubby pub feel continues with tufted leather banquettes and brass accents. Designers Jana Erwin and Audrey Tehauno also used handmade Zellige tiles from Morocco on the back bar and hand-dipped marbleized silk drapery panels for the windows.

For now, Georgia James Tavern will be open for dinner, adding a lunch service in the future.

Georgia James Tavern
777 Preston
281-846-6938
georgiajamestavern.com
KEEP THE HOUSTON PRESS FREE... Since we started the Houston Press, it has been defined as the free, independent voice of Houston, and we'd like to keep it that way. With local media under siege, it's more important than ever for us to rally support behind funding our local journalism. You can help by participating in our "I Support" program, allowing us to keep offering readers access to our incisive coverage of local news, food and culture with no paywalls.
Make a one-time donation today for as little as $1.