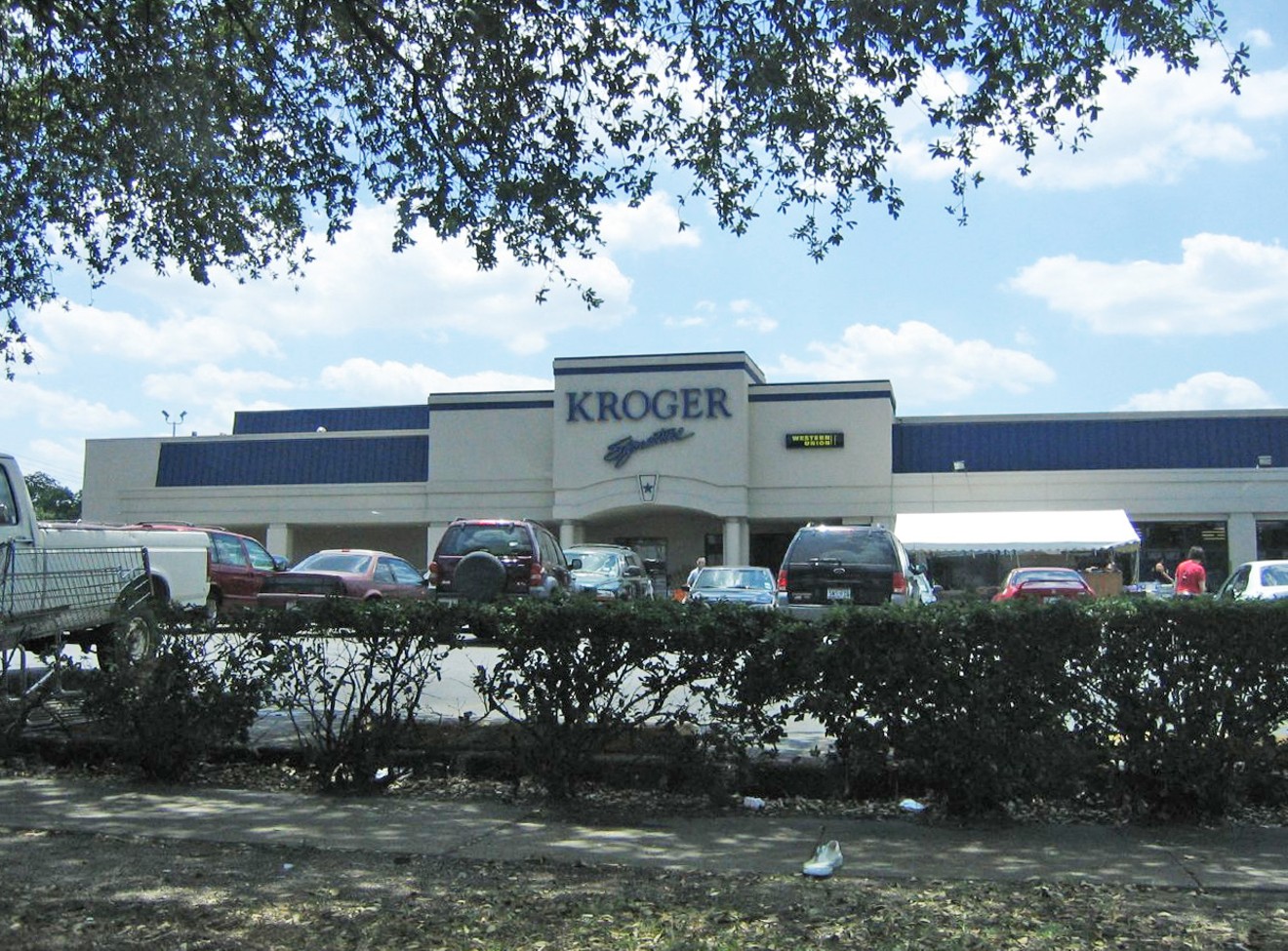 Time to say goodbye, you beautiful weirdo. Photo by Lian Chang
At roughly 10 a.m. on a regular old weekday, I was walking the main aisle of the Kroger on Montrose Boulevard. I popped across the street, as I did most days, from the building that used to have a nightclub on the roof (RIP Cody's) where I worked. I was going to see my favorite handlebar-mustachioed sandwich maker. He would use an old fashioned pump steamer to heat up the sandwiches he made (he knew my order by heart, natch) and when handing it to you, would call out "Enjoy!" (It sounded a little more like iiin-joyeeee in his Texas drawl).

While walking toward the deli counter, a man wearing extremely short shorts, flip flops and a tank top hurriedly passed between me and an octogenarian woman slowly pushing her cart up to the register. Did I mention from the neck up he was fully made up with a bright red wig on his head? The older woman paused momentarily, glanced at the gentleman as he walked by and then simply smiled and shook her head.

Ladies and gentlemen, I give you Disco Kroger.

This was in the early '90s, a time when there were still street festivals, college kids cruising Westheimer and all manner of interesting people to look (if not gawk) at. The world outside The Loop may not have been quite ready for drag queens and club kids (that would come later), but the Montrose was here for all of it and Disco Kroger was their grocery store.

Almost exactly ten years ago, I penned a story for this publication nicknaming the Inner Loop Kroger stores. It began with the one that was already known for its 24-hour shopping by the who's who of this neighborhood's citizenry, from the colorful to the more nondescript, as I was fortunate to witness for years seemingly daily.

Now, we learn, the store will be closing its doors for good.

Many smarter than I have commented on the changes happening in this happily eclectic and historic Houston hood. Old buildings replaced with high rises. Venerable venues like Mary's and Chance's are long gone while others like Number's teeter on the brink of extinction. Few even remember Sunday Funday at La Strada or the Westheimer Street Festival. Even Pride has moved downtown. Most of the Montrose's original denizens, replete with hippies and artists and freaks, have been priced out of the prized locations where new construction has changed the literal face of the neighborhood.

Is Disco Kroger the final vestige of what will soon be a forgotten era in Houston Inner Loop revelry? Not quite. The charm and the grit still remain, though you might have to look a little closer to find it. But, this does feel like yet another sign of a quasi-gentrification that has been slowly tugging at the fraying fabric of The Montrose (yes, you must say "the") for years, perhaps decades.

And I'll miss the late-night trips with club music blaring from the speakers and drunken partiers stopping for a frozen pizza and Advil on their way to wherever home is that night; the Sunday morning breakfast runs and the cheery sandwich guy (how long he's been gone, I dare not ask).

At the risk of laying too much on the shoulders of humble neighborhood grocery store, the carefree, live-and-let-live atmosphere that permeated it and the neighborhood that surrounded it were, for decades, a microcosm of an emerging city still trying to come to grips with its place in the world. It was as radically diverse 30 years ago as the entirety of Houston is today.

So, forgive me if I eulogize Disco Kroger with a level of gravitas befitting something more grandiose than a retail food shop would seem to deserve. For many of us, it was more than a store. It was symbol of how we wished things would be elsewhere.

Farewell, Disco Kroger, you beautiful weirdo. You will be missed.
KEEP THE HOUSTON PRESS FREE... Since we started the Houston Press, it has been defined as the free, independent voice of Houston, and we'd like to keep it that way. With local media under siege, it's more important than ever for us to rally support behind funding our local journalism. You can help by participating in our "I Support" program, allowing us to keep offering readers access to our incisive coverage of local news, food and culture with no paywalls.
Make a one-time donation today for as little as $1.