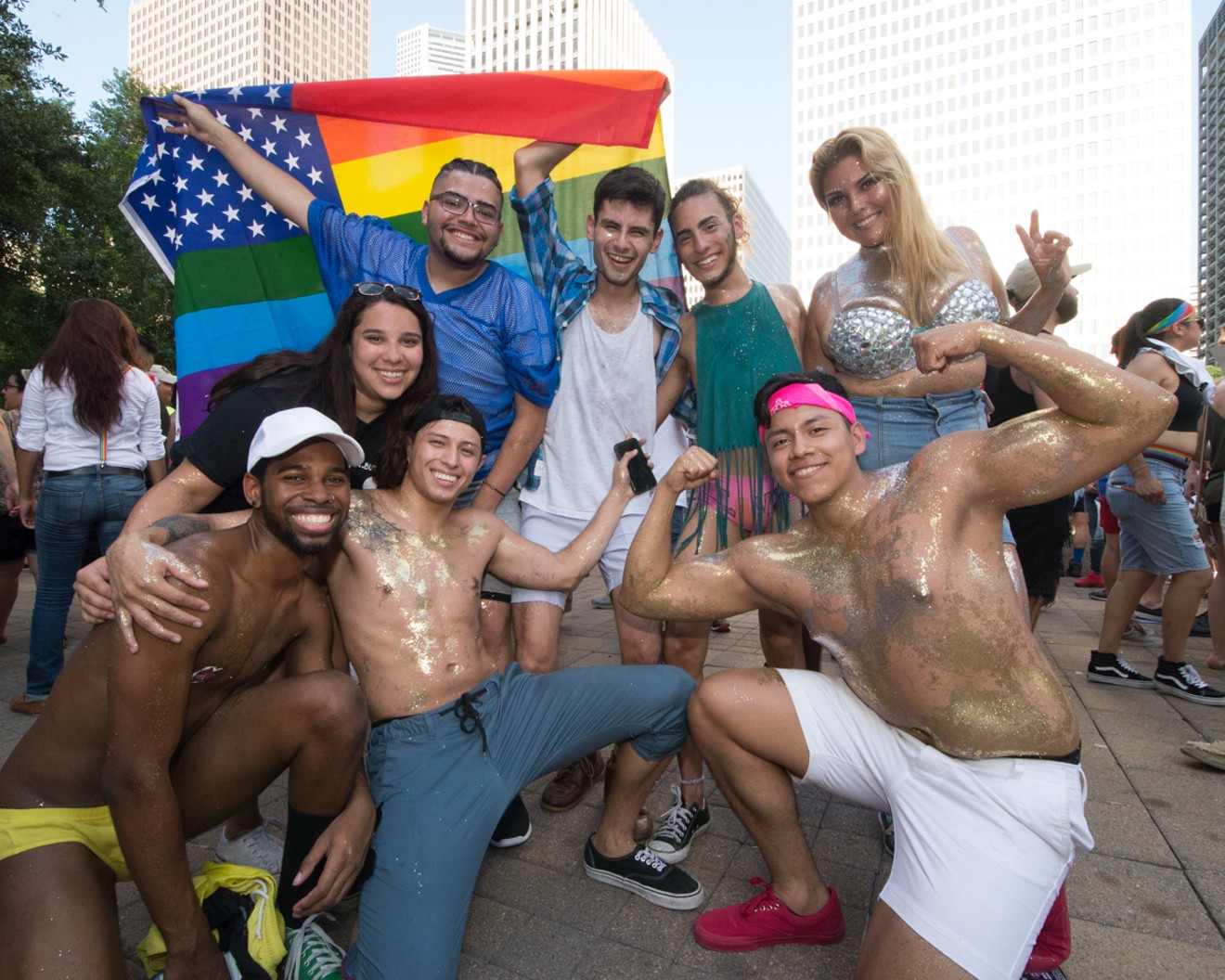 Few times in Houston are more fun than the annual LGBT Pride Celebration. Photo by Jack Gorman
The first pride parade was a riot.

The Stonewall riot of 1969 earned the badge as the turning point in the modern gay rights movement. And as such, June - gay pride month - is in full swing. An annual reminder of the struggles as well as celebrations of the fight for equality, it's only fitting to mark the 50-year anniversary with a a touch of pride and a humble yet necessary recognition of the power to rise above adversity.

Marsha P. Johnson, the modern diva of the gay rights movement, is where this story begins. A patron of New York City's infamous Stonewall Inn - a local gathering place for queer people - she was no stranger to ridicule or shame. After all, being homosexual was still illegal in this time period, and police raids were frequent. Yet, she finally had her fill and launched the first act of defiance. On that day in June, with one police raid too many for her comfort, she rose up and chunked a stone at the police officers. For her, it was likely the result of pent up anger. For the rest of the world, it was the "thud" heard around the world. No longer were members of the LGBTQ+ community banned to silence. Her truth was heard, and the rest was history.

Since then, the LGBTQ+ community has refused to be silenced, walking in the stiletto footprints first led by Johnson and strutting proudly forward...one gloriously fashioned shoe right in front of the other.

For those who identify as LGBTQ+, June has been widely accepted as a time to party and recognize pride in all its forms. And boy, does Houston know how to do it fabulously. The largest, most vibrant display of this is the pride festival and parade, which takes place June 22 in downtown Houston. The festival starts at noon at Hermann Square, 900 Smith, and the parade starts at 8 p.m. The route will encompass the west side of downtown including Allen Parkway, Bagby, Rusk, Milam, Walker, Pease and Smith.

No apology needed for the large display of stupendous glamour. We're here. We're queer. We brought beads, and we'll clean up after ourselves. The imagination can fill in the rest.

And as for the police? Ironically, they now show up in full uniforms to march in the parade as a show of solidarity. The ones who used to be the antagonists are now the ones recognizing the full and important value the LGBTQ+ community offers to the world. Talk about a full circle moment.

"It's all about connecting with the community at large. It’s neat that were able to provide a safe space for people to have a day of rest. For many folks, expressing your true self can be hard in your everyday life. What I like about the festival is it's a nice day of being around our extended family and enjoying seeing them again," said Dan Cato, a member of the Pride Houston committee.

Inside the festival, there are vendors from all areas of the globe - a testament to how diverse and universal the festival is. The sun never sets on the Houston Pride Festival participants. More than 150 tent spaces are reserved for vendors, in addition to music acts and family friendly activities. Cato estimates that upwards of 800,000 show up for the festivities throughout the day. Add in the bungee jumping, rock wall, face painting, art activities and the parade, and it's a smorgasbord of action. For an extra thrill, and because Houston can be too darn hot in the summer, be on the watch (or join in) as the area's reflecting pool becomes a make shift swimming area.

The annual LGBTQIA Pride Parade takes over Houston streets in late June.
Photo by Doogie Roux
With 50 years of celebration, the Pride Houston committee wanted to make this June a special recognition of the origins of pride festivities - including hardships as well as victories.

"It’s really a celebration of all those aspects. The Stonewall 50 portion is that it was started by trans women of color. We have four honorary grand marshals," Cato said. "This year, we’re returning to our roots and having trans women of color lead the parade, which is new and different for us."

Other changes involved a new category for the grand marshals, who are voted on by the public. "Gender non-binary" was an additional category, and Cato mentioned the community responded in record numbers to the voting.

"We’ve had more votes this year than ever before. It was 3.5 times more votes than in previous. In total, there were more than 4,500 votes. This was also the first time our male grand marshal has been African American. There’s a lot of history happening this year. It’s by far our most diverse set of grand marshals," he said.

With as much acceptance and inclusion that has taken place in the last 50 years, Cato feels there is still more work to be done.

"There still a long way our community needs to go. No one in the state or city is protected if they’re LGBTQIA. The Houston Equal Rights Ordinance lost a few years ago and hasn’t been able to come back to the surface. Trans women of color are still being murdered at alarming rates," he said. But the parade helps to refresh our memories. "Those stores come to light because it's pride month. Social media and regular media are clued into this movement. This isn’t the only time people talk about these issues, but it stays big because people are clocked into it. The celebration and parade are important because people are looking our direction, and we’re able to highlight some of our issues."

Marsha would be proud.

Festivities start at noon, Saturday, June 22 and run throughout the day. For more information, visit PrideHouston.org. Free to attend.
KEEP THE HOUSTON PRESS FREE... Since we started the Houston Press, it has been defined as the free, independent voice of Houston, and we'd like to keep it that way. With local media under siege, it's more important than ever for us to rally support behind funding our local journalism. You can help by participating in our "I Support" program, allowing us to keep offering readers access to our incisive coverage of local news, food and culture with no paywalls.
Make a one-time donation today for as little as $1.