When we moved to the Cypress area ten years ago, we noticed a place called The Vintage Pub within a ten- minute walk from our house. We thought maybe we would have a new "local" as the Brits say where we could walk in and be saluted a la Norm from "Cheers". Needless to say, with two small children, that never happened.

After a few years, the place changed hands and became The Office.There were a couple of pool tables and some good live bands once in a while. Still, it was dark and dank inside and didn't really lend itself to being a comfortable place for people, young or old, to hang out.

Recently, we noticed new signage going up at the space. We were excited to see The Ranch Bar + Kitchen because it meant a new bar that also served food. The Jones Road strip has some decent ice houses and live music venues, but one usually has to wait for a travelling tamale salesman to make the bar rounds in order to get a bite to eat. The Ranch is colorful and quirky.
Photo by Lorretta Ruggiero
This is the second bar business for owners Austin and Amy Schuring, who own The Farm Drinkery, a laid-back dive that caters to all sorts in the Champions area. It has a loyal local crowd and the Schurings are hoping to build the same kind of following at the Ranch.

I decided to take my husband and 18-year-old daughter to check out the grand opening, July 28. We walked in around three o'clock in the afternoon and noticed there weren't a whole lot of people. The bearded-young man behind the bar greeted us, told us to sit anywhere and came right over to get our drink order.

He explained the special beer prices and handed us a beer menu and a food menu. The beer menu changes quite a bit, but there are a lot of Texas brews, most of them from the Houston area. The food menu is pretty brief, offering typical bar food like fried cheese, pickles, fries, corn dogs, wings and a couple of slider options. We really just wanted a snack while we checked out the place, so we ordered a couple of the corn dogs, the White Castle-style burgers and some fries. 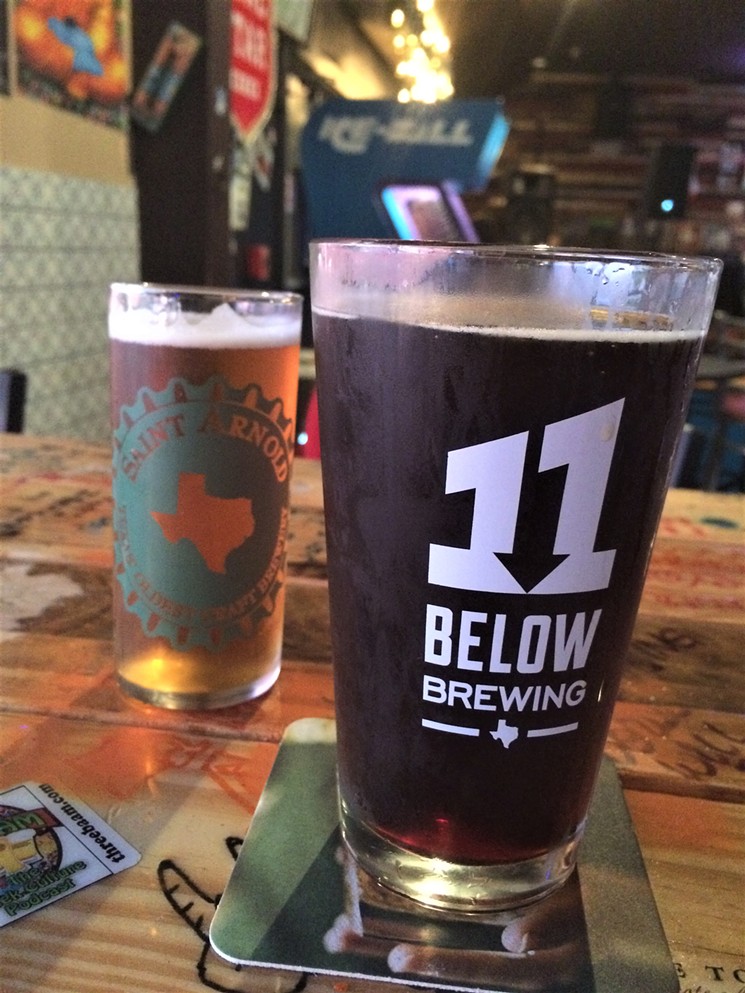 The English brown ale wins in flavor and size.
Photo by Lorretta Ruggiero

I had a pint of Gentleman's Relish Brown Ale from Lone Pint, a brewery out of Magnolia. My husband ordered More Cowbell from Buffalo Bayou Brewing Co. in Houston. It's served in a 12-ounce glass instead of a pint. The bartender told us that the beers with higher alcohol content are served in the smaller size versus pints. They are also a dollar or two more expensive.

A band was warming up onstage and we had a walk around the place. There's a lot of kitsch and some fun, quirky signs and memorabilia. With murals of Jimi Hendrix and another of a giant blue bull, it's definitely eclectic.

We weren't the oldest folks in the joint and our teen wasn't the youngest. There were a couple of smaller kids playing hopscotch and Twister, which are painted on the floors. On a Friday or Saturday night, I don't think I would bring wee ones, but on a weekend afternoon, it was pretty chill with some older folks, a couple of families and your usual suspects holding up the bar. Watch your head!
Photo by Lorretta Ruggiero
Our food was basic, just fine for some lazy afternoon beer drinking. We did really like the french fries, which were served piping hot and had a tasty salt and pepper seasoning. We headed over to the darts area, which has its own separate space. There are four electronic dart boards, bean bags and benches for sitting. On a busy darts night, it could be a safety issue, if anyone throws like my daughter does.

There are some old school video games, a couple of pool tables, a Nintendo station and a few board games on hand for those inclined. Bring your quarters. 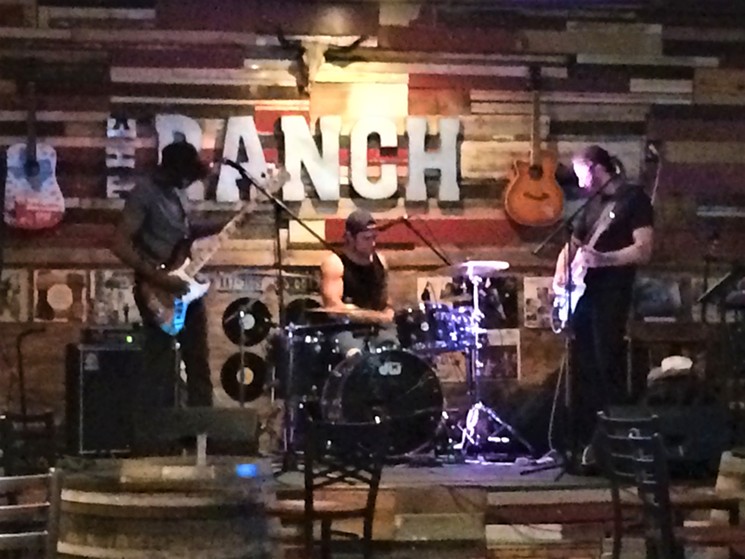 The Ranch has music on the weekends.
Photo by Lorretta Ruggiero
The band started playing and I assume the three-year-old tot belonged to one of the members because he yelled " Rock and Roll, Daddy!", then went back to his skee ball. They were a decent cover band, playing the likes of Tom Petty and The Doobie Brothers.

My husband and I decided to make a second visit the next weekend while waiting to pick our daughter up from the Mexican restaurant that's in the same strip center. Again, there weren't many patrons on a Sunday afternoon. With The Jayhawks on the sound system, we settled in at the bar and were greeted warmly by the female bartender. She wasn't real familiar with the beer menu, so it took us a minute to figure out what we wanted. She gave us a sample of Blood Belt from Southern Star, but it was too fruity for us. I decided to try Sassy Pony from Gigantic Brewing Company, out of Portland, Oregon, simply because I am a horse nut and I liked the name. I did not like the beer, but I suffered through it. When the beer tap says "hoppy", believe it. If you like a citrus-style beer, it delivers. We were only stopping in for a beer, but somebody had a hankering for those fries again, so we ordered them along with some fried cheese curds recommended by the bartender. She didn't steer us wrong on those. It was quite a large serving and they had a nice tangy bite from the cheddar, which is way better than the blandness of fried mozzarella.

I made a quick stop at the ladies room, because I had read on line that it was sub-par. I didn't find that to be the case. It was perfectly clean, decorated in cool, hippie-chick drawings. It's not the restroom at The Ritz, but this is a bar, not a five-star hotel. I asked my husband about the men's restroom and he said it was fine except for a large piece of cardboard over the urinals where people could show off their art skills. Unfortunately, some fella's skills and maturity didn't go past sixth grade, because there was a drawing of male genitalia. Just a warning if you're bringing your sons into the men's room. The ladies have unicorns and rainbows. I think that says a lot. 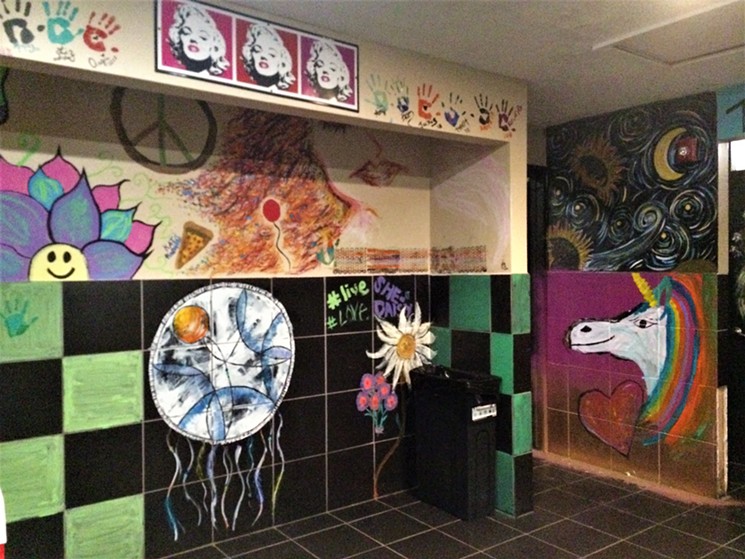 The ladies' room is a happy, hippie place.
Photo by Lorretta Ruggiero

The Ranch has live music on the weekends, karaoke on Tuesdays and trivia on Wednesdays. Check its Facebook page for event details and drink specials.

For right now, this is a welcoming place for day-drinking, game-playing and game-watching. Compared to the previous businesses, The Ranch Bar + Kitchen offers more entertainment, a friendlier staff and some better food options. We were told that there will be an expanded food menu in the future.

It's also within a ten minute walk of my house, so you may see me there attempting to beat my husband at darts and trying to get my fair share of the french fries.

The Ranch Bar + Kitchen is located at 13245 Jones. It is open daily from 11 a.m. to 2 a.m.
KEEP THE HOUSTON PRESS FREE... Since we started the Houston Press, it has been defined as the free, independent voice of Houston, and we'd like to keep it that way. With local media under siege, it's more important than ever for us to rally support behind funding our local journalism. You can help by participating in our "I Support" program, allowing us to keep offering readers access to our incisive coverage of local news, food and culture with no paywalls.
Make a one-time donation today for as little as $1.