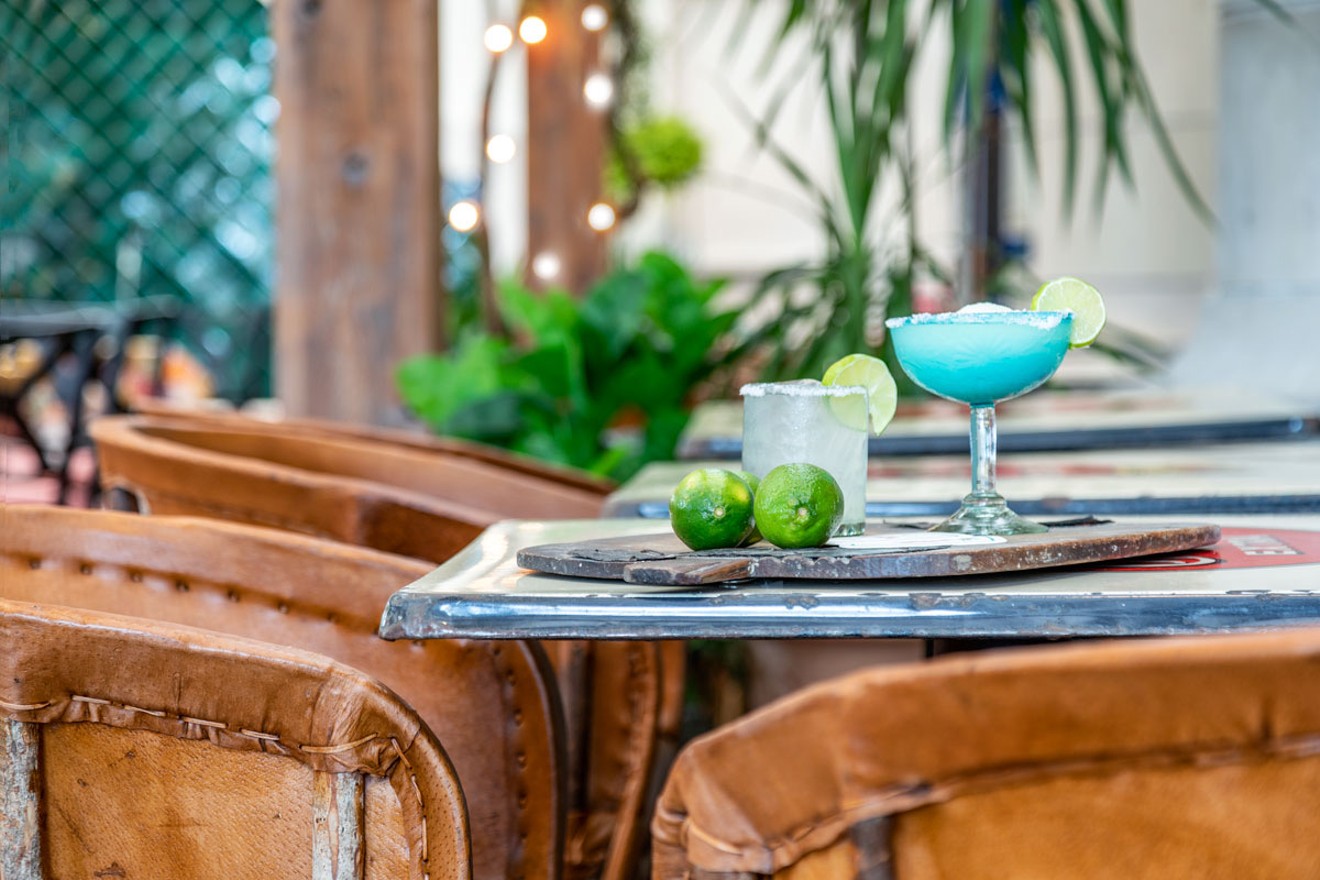 Los Tios has blue margaritas on the rocks or frozen. Photo by Kerry Kirk
Plaza in the Park, 5110 Buffalo Speedway, announced that it is adding two new restaurants to its line up at the development from EDENS, a real estate owner, operator and developer with more than 110 places nationwide. The outdoor destination, located near the intersection of Buffalo Speedway and Bissonet currently has retail businesses such as Custom Ink, Diesel Barbershop and Massage Envy open at the site plus a Kroger grocery store, Fellini Caffe and a Subway location. 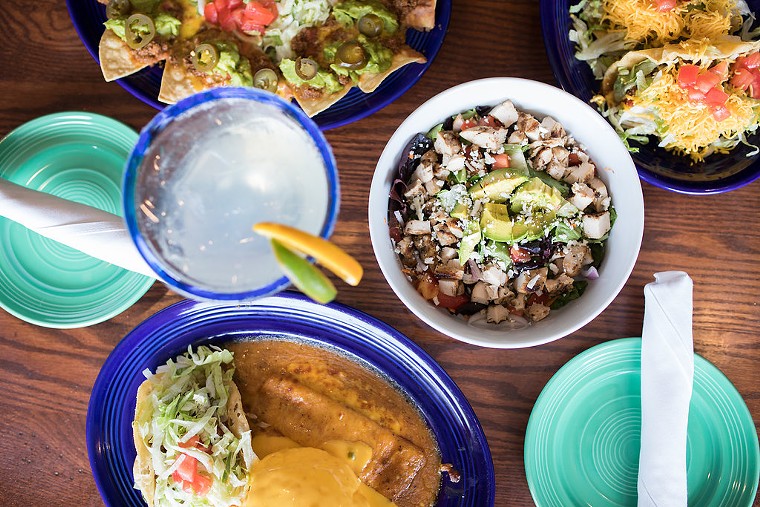 Los Tios has all the Tex-Mex favorites.
Photo by Kerry Kirk

The new restaurants come from Adair Concepts. The first, Los Tios Mexican Restaurant, has been a Tex-Mex staple in Houston for nearly 50 years. Besides its fajitas, enchiladas and combo plates, it's known for its puffy quesos. It also claims to have introduced Houston to the frozen margarita for the first time in 1975. The new location will be the sixth for Houston and will occupy 7,573 square feet of space that will be designed by Aaron Rambo as a tribute to the heritage of the Los Tios brand while offering a welcoming decor and vibrancy befitting the West University neighborhood.

The second concept, Adair Kitchen, is a from-scratch restaurant that serves breakfast, lunch and dinner. Its recipes go back generations in the Adair family and is the second location for the concept. Besides its all day menu, there will be signature cocktails, a full bar menu, a modern wine list and beers on tap.

The debut of two of its restaurants at Plaza in the Park is a sort of homecoming for Adair Concepts which first opened its Skeeters Mesquite Grill in the neighborhood in 1988. President Nick Adair, a West U resident himself, says " The neighborhood means so much to us and we're thrilled to have partnered with EDENS to expand two of our concepts to Plaza in the Park. We can’t wait to provide additional welcoming neighborhood gathering places for local foodies and families." 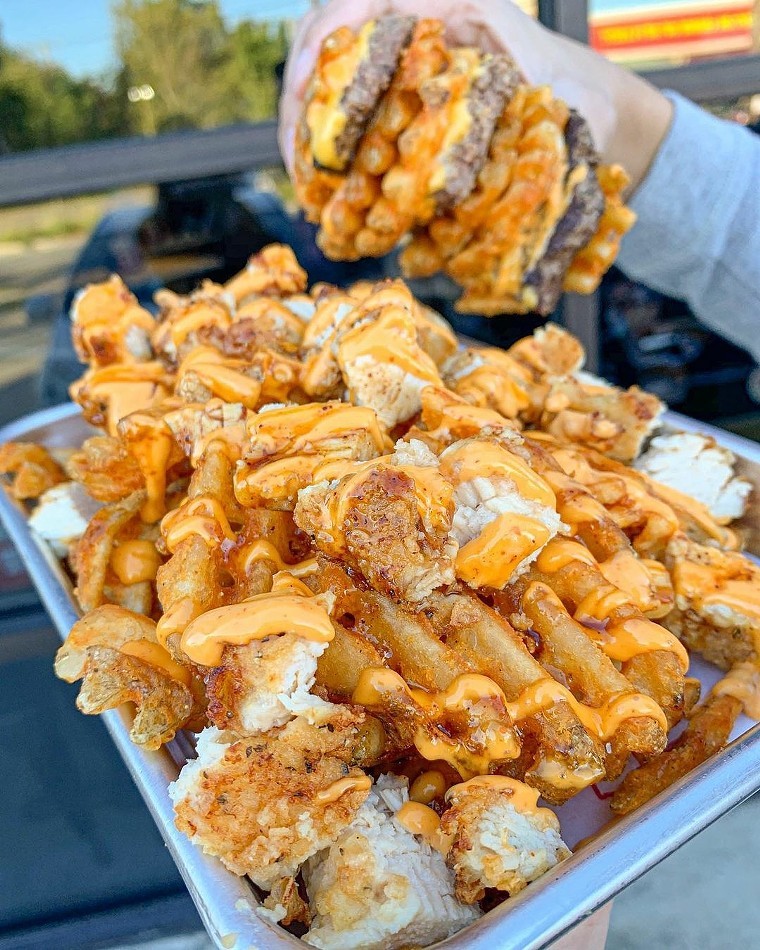 The Chicken Thunder Fries are not what the doctor ordered.
Photo by marissa@houstonhotspots
The Waffle Bus, 1540 W. Alabama, celebrated its grand opening weekend beginning December 17. This is the second brick and mortar location for the popular food truck which was founded by Phi Nguyen in 2012. It became a food truck favorite with its loaded fries and fried chicken concoctions and opened its first brick and mortar in October 2019 at 1835 N. Shepherd. The Waffle Bus also operates at TDECU Stadium for the football games.

This isn't health food, it's joy food. The Buttermilk Fried Chicken shows up in various guises on the menu. The Chicken and Waffles is a standard but it also offers Hot Chicken and Nashville Hot Chicken as well. One of its best sellers is the Chicken Thunder Fries, a mess of waffle fries topped with buttermilk fried chicken bites, spicy mayo, ancho chile honey butter and sriracha. Speaking of a mess, the Hot Mess Fries takes it a step further and adds white cheddar mac & cheese to the already loaded Chicken Thunder Fries. There are also wings and burgers, including the Big Cheezy, a Black Angus smashburger  oozing with white cheddar mac & cheese, bacon, American cheese and stormy sauce. It will use up all your cheat days for the month.

The new Montrose location also has a wide selection of milkshakes, Milk and Cereal shakes (think Cinnamon Toast Crunch and Fruity Pebbles) plus it has Dole soft serve in the original pineapple version and a black cherry one as well.

The Waffle Bus has a full liquor license and beers on tap, too.

5Kinokawa, 3119 White Oak, opened this week from chef and owner Billy Kin and chef Brandon Silva. The new restaurant is named for a city in the Wakayama Prefecture in Japan and its tasting menu will reflect the uniqueness of its name. It's also a tribute to Kin's father who owned a restaurant, Kinokawa, in Japan.

Kin is known for his work at Blackbird Izakaya and Hidden Omakase and the new tasting concept offers him the chance to focus on individualized service in an intimate 14-seat restaurant. It's intended to be an immersive experience where guests will be treated to a culinary experience that features the finest foods,  from Japanese A5 Wagyu to the freshest seafood with internationally-sourced ingredients flow in weekly.

Silva departed his tasting restaurant Degust this past September. His culinary background, however, includes a stint as sous chef at renowned sushi restaurant, Uchi, so he is no stranger to the world of Japanese cuisine. He and Kin also plan to debut Tesseract, an izakaya concept, at the location sometime in 2022, as reported by CultureMap Houston.

There will be two seatings each night and possibly, rumor has it, a private chef's table will be available. Reservations can be made on Resy. Eclairs line up in a pretty row at Le Macaron.
Photo by Angel Santiago
Le Macaron, 130 Vintage Park, softly opened December 22 and will have a grand opening January 8 from 10 a.m. to 10 p.m. The French pastry shop is offering its customers a Buy Three, Get One Free deal on its macarons for the grand opening. It will also announce the five winners of its Free Macarons for a Year that day. Entries can be submitted here for a chance to win a box of six macarons each month for a year.

The new franchised location is operated by husband and wife Moni Mau and Angelica Covarrubias. It is the third Houston area location with one on Fry Road and another at The Galleria. The shop sells gluten-free macarons with no artificial preservatives. Besides macarons, there are Napoleons, eclairs, croissants, French gelato, French chocolates and cakes. The family-owned deli chain began in Beaumont, Texas in 1976 by founder Joe Tortorice Jr. It now has over 250 locations in 28 states. The company was also the first major American restaurant concept to ban artificial trans fats and also high-fructose corn syrup.

Clarkwood, 3201 Allen Parkway, softly and quietly opened this past week at the beautiful River Oaks 1930 building being restored and developed by Radom Capital as a dining and office complex. Clarkwood, a cocktail and wine bar, joins BlendIn Coffee at the site and will eventually share an outdoor seating area with the upcoming live-fire steakhouse, Andiron, from Sambrooks Management Company, according to CultureMap Houston.

Clarkwood currently has nine signature cocktails and a dozen wines by the glass and will be introducing cheese and charcuterie in the future.

Brennan's of Houston, 3300 Smith, announced that it is temporarily closed due to staff shortages and is cancelling most of its end of the year celebrations, with only pre-booked private events being held at the restaurant. It will reopen for business January 4.

Cane Rosso, 1835 N. Shepherd, closed November 15
Eatsie Boys, 2202 Dallas, closed December 31
Fajitas A Go Go, 5404 Kirby, closed December 24
Kanomwan, 736 1/2 Telephone, closed September 7
Mozambik, 5085 Westheimer, closed November 21
The Texas BBQ Lab, 13251 Jones, closed mid-December
UB Preserv, 1609 Westheimer, closed December 21
KEEP THE HOUSTON PRESS FREE... Since we started the Houston Press, it has been defined as the free, independent voice of Houston, and we'd like to keep it that way. With local media under siege, it's more important than ever for us to rally support behind funding our local journalism. You can help by participating in our "I Support" program, allowing us to keep offering readers access to our incisive coverage of local news, food and culture with no paywalls.
Make a one-time donation today for as little as $1.