Before You Eat That Eel: Unagi's Days Are Pretty Much Numbered 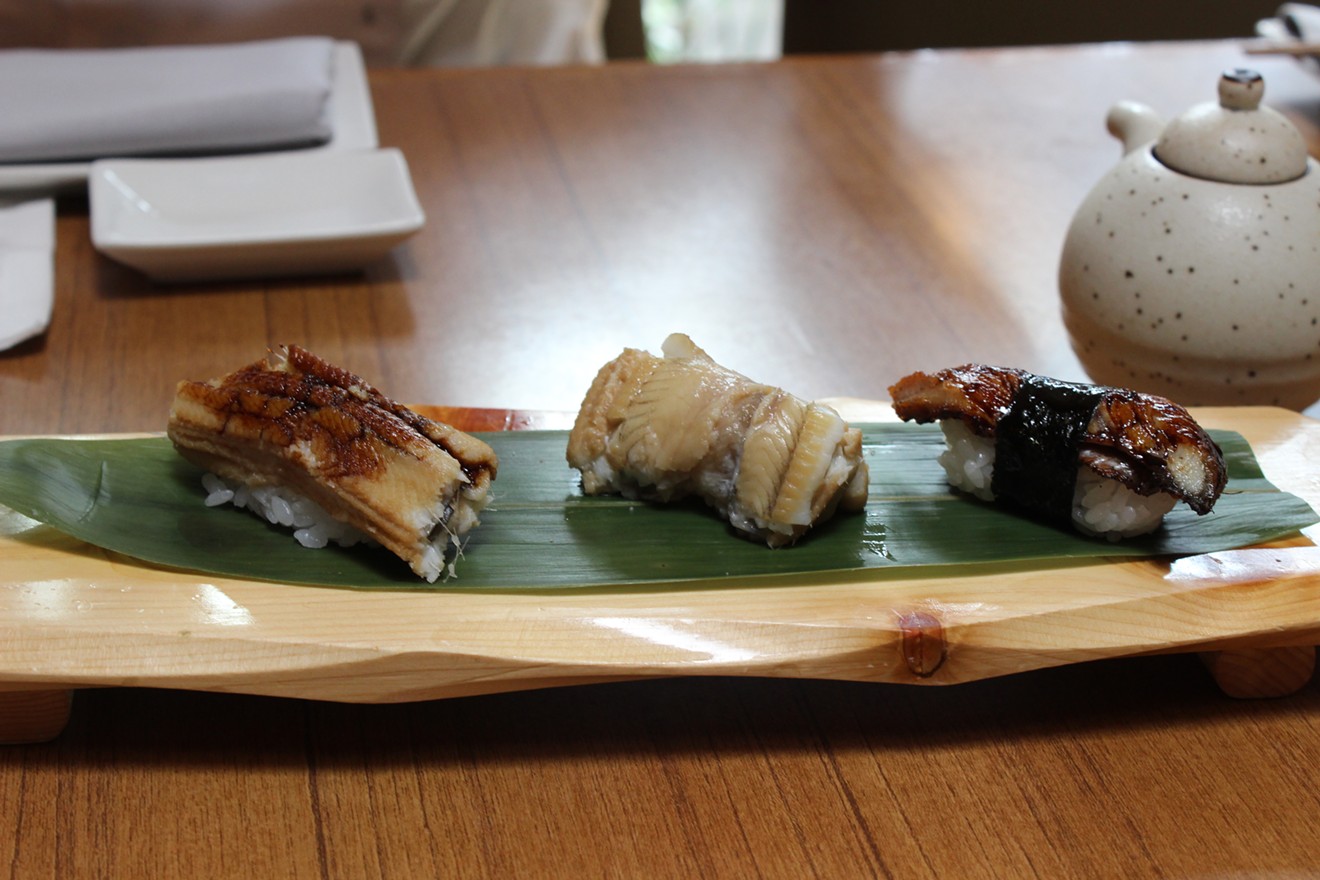 Two servings of anago and one of unagi (on the right) at Kata Robata. Photo by Gwendolyn Knapp
Welcome to Before You Eat That, which broaches all the annoying food subjects that make you highly uncomfortable. This is for all you schadenfreude-obsessed killjoys out there. So far, we've covered the continuing saga of the is-it-too-smart-to-eat octopus, the oyster and its massive gonad, and now we're on to the sad plight of the freshwater eel.

There are poachers in Maine who've been stealing baby eels, known as elvers, the going rate for which happens to sit at around $1,500 per eel. In Japan, where freshwater eel, or unagi, is basically a way of life, the population has been on a severe decline, to the point of almost being wiped out, and things are getting pretty dire. The country added its freshwater Anguilla japonica as an endangered species in 2013 after seeing a 90 percent decline over three generations. It's said the Japanese consume 70 percent of the world's freshwater eel. It's just that the unagi situation is also now bleeding over into the States.

"Nobody has figured out how to breed eels in captivity, so they all have to be wild-caught," Bill Trotter of Bankgor Daily News told NPR just last month.

That's why importers are sourcing freshwater eel from where they can, China, Taiwan and here in the U.S., primarily from Maine and South Carolina. The elvers are eaten as a delicacy and also raised at eel farms.

The freshwater eel (or as you'd find it on a sushi menu: unagi) is the only fish that is spawned in the ocean and travels to live in freshwater. It is, in essence, the very opposite of salmon, which is born in freshwater and swims out to sea. Freshwater eels can live up to 25 years in fresh and even brackish water before venturing out to sea, the Atlantic's Sargasso Sea, to be exact, where they lay their eggs and then die.

In 2013, Esquire urged its readers to stop ordering unagi. Experts have even questioned why the Fish and Wildlife Service hasn't added the freshwater eel to our endangered species list as well (turns out it's because they can also survive in salty estuaries). The agency doesn't see a problem, which is scary, because as The New Yorker reported in January, the Japanese government didn't see a problem either until many famous unagi restaurants were forced to shutter: "It's an environmental crisis for the endangered species and its habitat, a financial crisis for the centuries-old unagi industry, and a cultural crisis for the Japanese public."

Just last year, a piece in The Atlantic gave a brief look into the city of Hamamatsu, Japan, where "the area’s first unagi farm was established in 1891," and today is struggling with a loss of affordable glass eels to raise and potential restrictions that could cripple farmers. Still, the country continues to gobble up its dwindling unagi supply, eating 30 percent of its yearly eel intake every July around the Day of the Ox, when eel imports double.

Some of it, no doubt, coming from America. 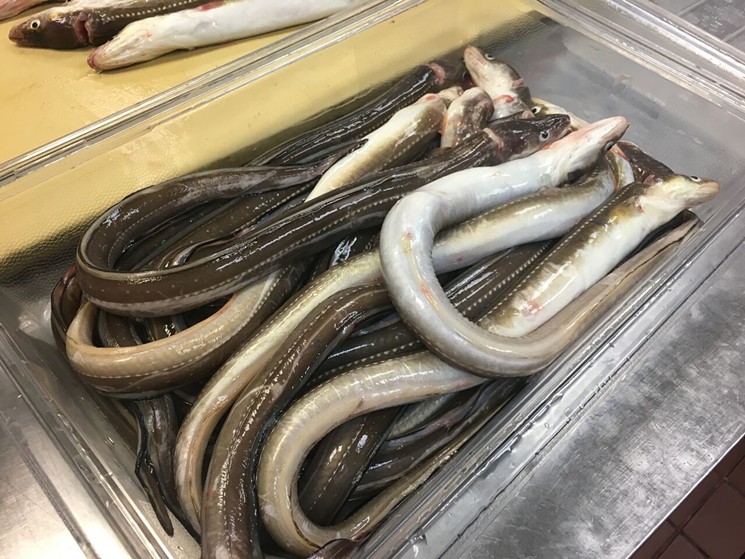 Eels in the kitchen at Kata Robata
Photo courtesy of Kata Robata
So, if you're still jonesing for unagi — we can't blame you; it is really delicious — you're also making the choice to eat something that is terribly unsustainable. Here in town, at Kata Robata, chef Manabu "Hori" Horiuchi actually says he prefers serving and eating anago, saltwater eel. It's wild-caught and not at risk, not yet anyway. It's also a bit different texturally and flavor-wise from unagi, a little bit fluffier, a little bit sweeter.

"It's traditional," chef Hori says. "Melt in your mouth. Tender." He serves anago with a simple, dazzling dash of yuzu and sea salt, a wonderment in summer. Or topped with the restaurant's impeccable eel sauce, made in part by cooking down the bones of the fish in house.

He does serve unagi, just as pretty much all sushi restaurants in America do. But you can see the consternation slip across Horiuchi's face as he broaches the topic of sourcing and serving it: "Think about beef," he says. "It's the same thing."

But maybe just a tad worse.