I'll have the taco special, please. Photo by Kimberly Park
Every year since the “Paws On Patios” allowance was passed in 2011, a slew of Houston restaurants have applied for permits and patio inspections to allow dogs coveted entry into the land of human food — the most revered land in all of the dog universe.

In fact, there are a wealth of dining and drinking options these days for folks who wish to dine with their dogs in tow. While many people are already familiar with longtime dog faves such as Barnaby's, Cyclone Anaya's, Giacomo Cibo e Vino and Tila’s Restaurante & Bar, this list includes some great new spots and a few trusty gems that can't be overlooked.

The backyard at Presidio offers up shade for you and your dog.
Photo by Gwendolyn Knapp
10. Presidio, 911 West 11th

Charles Bishop, formerly of dog-friendly Southern Goods, and chef partner Adam Dorris (formerly of Pax Americana) do allow pups in the backyard at this new eatery in the Heights, which features live music on the weekends and craft drinks, wine and beer as well. The menu is bent toward Texan comfort food and meaty curiosities — giant burgers, peel-and-eat shrimp, and tacos like your granny made along with roasted pig head and even pork collar. The dog is bound to get jealous.

This watering hole with ample outdoor seating, televisions, bar food in the form of huge burgers, spinach dip and nightly specials, including Wednesday steak night, cheap tacos on Sunday afternoons and $5 snacks during weekday happy hour, is totally dog-friendly. Home to ice cold beer and lots of booze, Henderson Heights is a low-key neighborhood gem right off the main drag of Washington.

Made in the shade.
Photo by Kimberly Park
8. Killen's BBQ, 3613 East Broadway

Not many people are aware that Pearland destination restaurant Killen's BBQ is actually, totally, dog-friendly. Dogs make it more fun to wait in line (as does the restaurant's free-beer-for-the-line policy). Shady outdoor seating and meaty leftovers make this a mecca for hungry dogs. Just don't go spoiling them too much.

The newest eatery of the bunch. This Heights restaurant just opened up on June 3.  While the name sounds a touch terrifying, the does not. Basically, it's a casual spot with juicy burgers, shoestring or sweet potato fries, milkshakes and ice cold beer, and the added bonus of a huge covered outdoor seating area that's totally dog-friendly.

Tasty, globally influenced, chef-driven tacos inspired by the likes of L.A.'s Roy Choi, a slew of healthy and delicious salads, and potent margaritas make this new outpost of food truck to brick-and-mortar eatery a go-to already, but a front deck that's totally dog-friendly is also a bonus. It's a reliable casual spot for the weekend or after work with your fur babies. 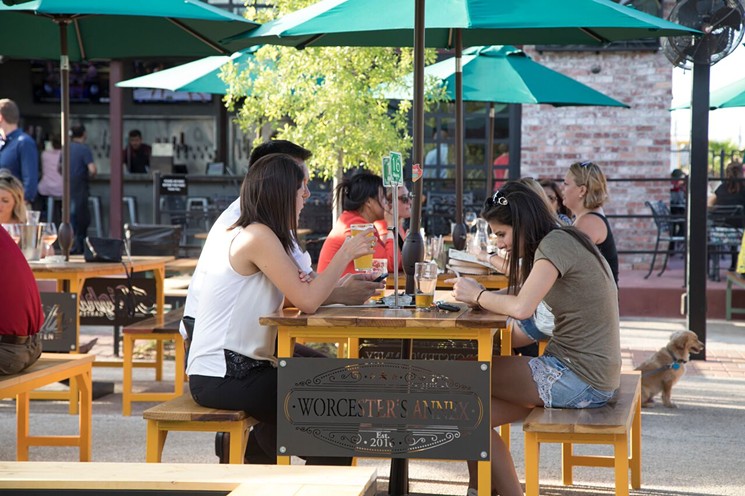 This two-in-one watering hole, featuring a great craft beer (and wine) bar along with one of the best craft cocktail destinations (Worcester's Annex) in Houston right now, the Heights Bier Garten has day drinking (and, okay, evening and late-night drinking) down to an art form. Don't worry, there are snacks available from Kirby Group's Brandon Silva, one of the most promising up-and-coming chefs in town.