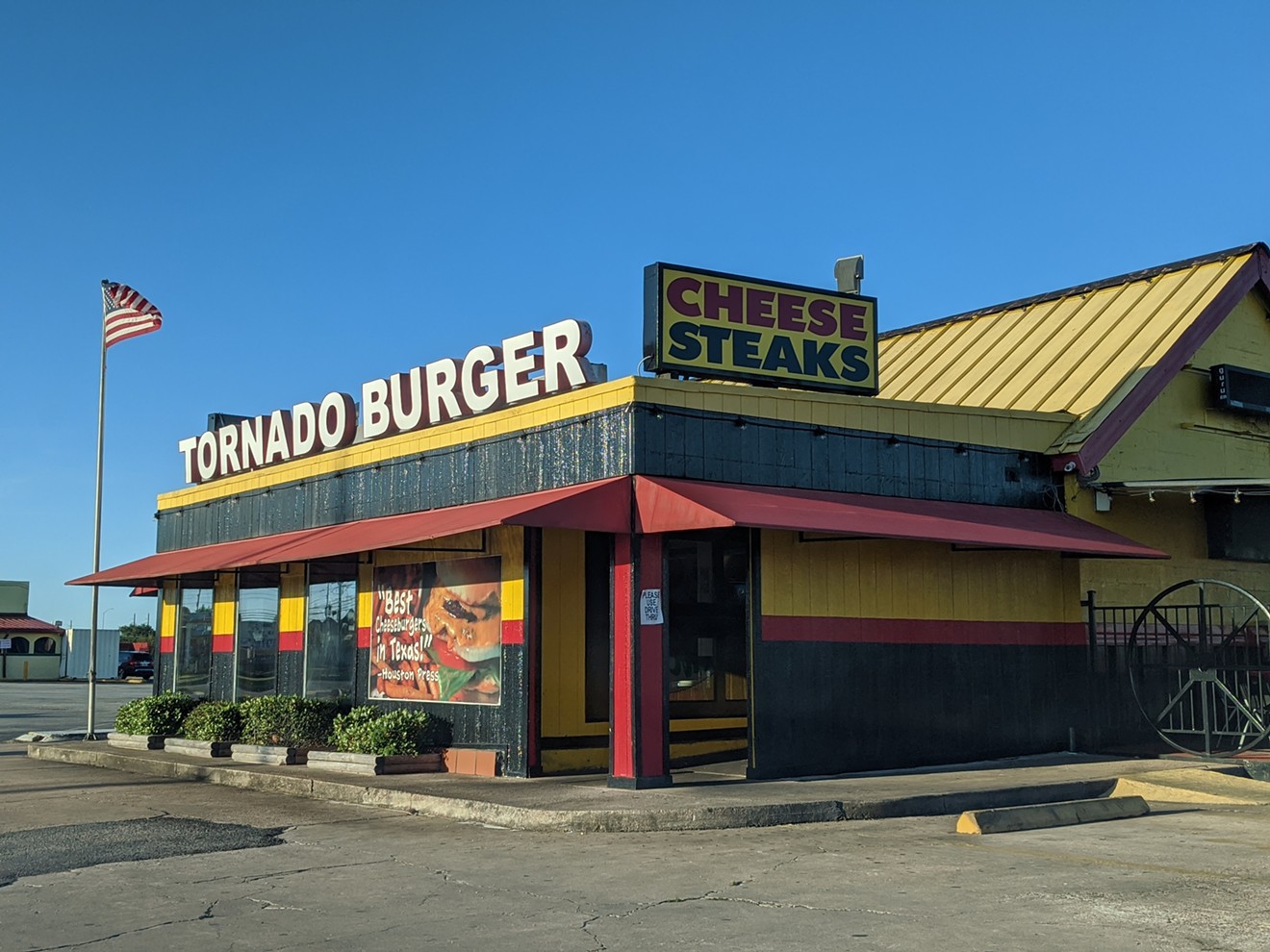 Stafford's famous Tornado Burger is still going strong during COVID-19 thanks to its busy drive-thru line. Photo by Carlos Brandon
The stay home order is, within limits, over for some businesses, among them restaurants. While many eager freedom lovers will rush our city's dining rooms, masked and carefree, I'd wager a bet the rest of us will continue looking for drive-thrus and takeout for the foreseeable future. I certainly will.

Takeout has become part of our new reality in this post-COVID world. Rather than full parking lots and a lack of available reservations, the quality of a restaurant is now judged by the size of its to-go line and the simplicity, safety, and quality of their takeout systems. Some have had to revamp operations from the ground up to cater to this new, albeit temporary, economy. Others, a lucky few, have leveraged existing operations and business models to maintain, possibly even increase, business (masel tov to the Raising Canes near my house, which has seen a near-constant line of cars wrapped around its building for weeks).


Such has been the case for one hometown favorite with a history of local media accolades and a pandemic drive-thru line that just won't quit. I'm talking about the original Tornado Burger in Stafford. A local staple and favorite destination of little league teams, area professionals and the occasional day-drunk 20-something since 2007. Among the best burgers in Houston, according to some, though less beloved by local critics in recent years. 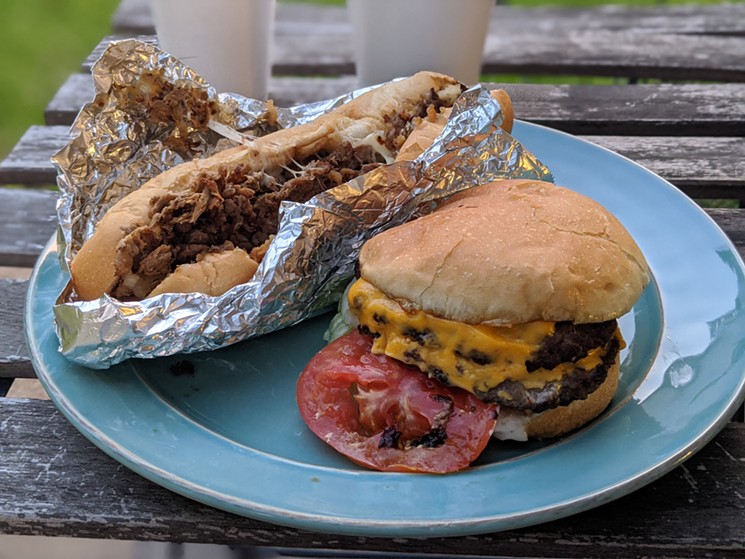 There were some tomato casualties during transportation.
Photo by Carlos Brandon
My first impression was that this is a place worth visiting during safer times. While I appreciate the outpouring of local love for this veritable institution, takeout just felt wrong as I pulled up to the roadside shack with characteristic yellow and red paint and a burger dive ambiance that promises health code violations and the smell of stale grease. My spirits were soon lifted at the sight of booze on the drive-thru menu. A sure sign that all would be well.

The drive-thru wraps around the back of the building and past a number of oddities, including a shipping container with a yellow '40s-era sedan parked on top. I grinned at the idea of this storage container/rust-bucket aesthetic being so inauthentically replicated at much trendier inner-city joints — here's looking at you, Truck Yard.

I ordered the staples. A double cheeseburger all the way (not the signature spicy burger because, as established in previous reviews, I am a wimp), a cheesesteak and a margarita for good measure. Before we get into the sandwiches, let's get one thing straight. Tequila is a prerequisite if you're calling something a margarita. While I appreciate the $4.95 price tag for a 16-ounce frozen drink, I've been to enough tailgates and house parties to recognize the taste of grain alcohol and margarita mix. One sip of this so-called margarita elicited a scrunched face reaction of disappointment and bad memories. Not one to let a cocktail go to waste, I trudged through and, miraculously, the taste problem seemed to correct itself as my styrofoam cup got lighter.

Beef, cheese, and booze. This is how you quarantine.
Photo by Carlos Brandon
As for the burger, I expected to be blown away. Instead, I was mildly pleased and left wondering if the Five Guys down the street from home would have been a better choice. Maybe the real magic lies in the spicy burger. Maybe the drive home and 5-10 minutes spent sanitizing and changing clothes was just enough time to harden the cheese, overcook the house-ground chuck patties and saturate the bun (spoiler alert, this is partially true). Still, the lauded tornado burger was, ultimately, more of a mild gust.

They don't call the place tornado cheesesteaks, but from signs posted all around the building, you wouldn't be wrong to assume its the most popular menu item. My beefsteak with grilled onions was satisfying in the way bar food and stadium hotdogs are satisfying. Mostly because you can't go wrong with bread, beef, onions and melted cheese. Sadly, the trip cooled the cheese a bit and hardened the bread. Still, I bit in just in time to get one good pull of melted cheese and a dying puff of steam and cooled it off with a swig of $5 "margarita", thinking that perhaps I've done Tornado Burger a disservice by reviewing its legendary offerings in the context of takeout.

I've been plagued by this thought while reviewing and eating takeout meals from some of Houston's most beloved kitchens. There's just no substitute for good food served fresh and eaten promptly. During this quarantine, I often think of Ramen Tatsu-ya, where ramen is served no more than 60 seconds after noodles touch broth, and takeout was once discouraged, if not outright forbidden, now forced to operate as a 100 percent takeout operation. Or, our myriad sushi kitchens, most of which are closed altogether as takeout sushi is a marriage forged in food hell.

So, how do we judge the quality of food if we, the reviewers, are butchering the meal with time and cold temperature before it even makes its way to our tables? Sure, a burger is a staple of American to-go dining. My first experience at Tornado Burger, takeout or not, left much to be desired. Still, I can't shake the feeling that, when I eventually go back for a proper dine-in meal, I'll feel differently. Until such time, at least put tequila in your margaritas, people.
KEEP THE HOUSTON PRESS FREE... Since we started the Houston Press, it has been defined as the free, independent voice of Houston, and we'd like to keep it that way. With local media under siege, it's more important than ever for us to rally support behind funding our local journalism. You can help by participating in our "I Support" program, allowing us to keep offering readers access to our incisive coverage of local news, food and culture with no paywalls.
Make a one-time donation today for as little as $1.