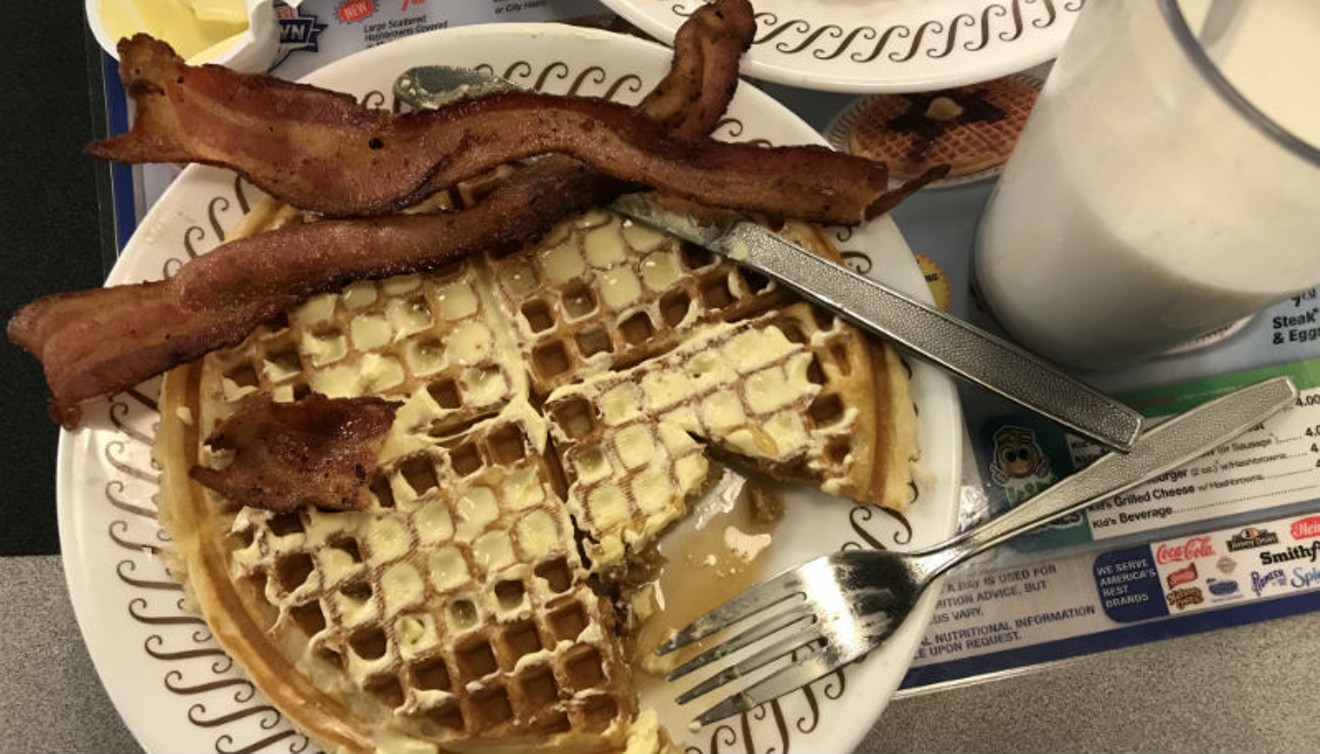 Here's one way to do it. Photo by Kate McLean
Open 24 hours a day, seven days a week, Waffle House is usually a last-minute decision and always when you need it most. A round of applause please for the staff who work hard to fill those hours—go ahead, it’s okay to throw them a few extra bucks.

Houston isn’t exactly the diner type of town, but thanks to Waffle House we’re not totally in the dark. With 2,100 locations nationwide, mostly in the South, chances are there’s one nearby.

The Waffle House team gets food out fast. Milk in 30 seconds. Hash browns in two minutes. Waffle and side of bacon down in six. $10.17 total on the table.

For a waffle, the batter is dropped to order, and at $3.40 it’s a pretty good deal. Upgrading with peanut butter or chocolate chips is only 30 cents each. Justin Litz, a longtime Waffle House customer, thinks of waffles as an underrated dessert. “If you’re looking for something sweet to round out the night—waffles. Adding toppings like whipped cream and chocolate sauce, it’s practically a sundae without the ice cream. I guess you could even put ice cream on there.”

Waffle House syrup is like candy, liquid candy. “Whipped Spread” in place of butter still totally works, but knowing that for the future you can BYOB. The best way to enjoy a waffle is to butter every single square and then rain syrup down per bite. Otherwise it’s a ticking time bomb for sogginess. Three strips of bacon at $3 make for a good sidecar.

The hash brown menu section is clearly a passion project. They come in three different sizes and are priced as moderately as $2.40 for a regular order of plain. But plain hash browns can be ordered anywhere—what’s special about Waffle House are all the upgrades that can be made— like country gravy, or sautéed onions, or something called Bert’s chili.

The dining room consists of booths as well as counter service, which gives an all-access view of hash brown crispin’ and waffle flippin’. They might have even spearheaded the whole “open kitchen” concept?

Waffle House
There are 25 locations in and around Houston.
wafflehouse.com
KEEP THE HOUSTON PRESS FREE... Since we started the Houston Press, it has been defined as the free, independent voice of Houston, and we'd like to keep it that way. With local media under siege, it's more important than ever for us to rally support behind funding our local journalism. You can help by participating in our "I Support" program, allowing us to keep offering readers access to our incisive coverage of local news, food and culture with no paywalls.
Make a one-time donation today for as little as $1.