Chef Chat: Jaime Salazar of Brasserie 19 is Hungry Like The Wolf

Chef Jaime Salazar in his happy place. Photo Courtesy of Clark Cooper Concepts
As a present, when Jaime Salazar graduated high school (with perfect attendance) his parents gave him the choice of a car or a 30-day trip to Europe. His brother chose the Chevrolet El Camino. Salazar chose Paris.

In Paris, he tasted escargot for the first time, sat in on a cooking class at Le Cordon Bleu and fell in love with camembert cheese in the backseat of a car on the way to Versailles.

At the age of 9, he had bought his first cookbook at Costco, a cooking textbook. Since then he’s been an insatiable sponge, learning any chance he gets. The focused, young chef admits casually, “I’ll try anything.”

Salazar grew up in Los Angeles, attended The Art Institute of Las Vegas and even met Thomas Keller before moving to Houston in 2007. For the past two years, under Brandi Key, Jaime Salazar has been running the swanky River Oaks hot spot Brasserie 19.

The Houston Press sat down with Chef Salazar to talk line-cooking, skateboarding, and road trips to In-N-Out Burger with the family…

HP: What was one of the first recipes you’ve ever attempted?

JS: There was this recipe for a chicken and shrimp stir fry. The recipe called for ‘peppers.’ I accidently bought habaneros. Afterward, [I showed my Dad the peppers,] I didn’t realize I had used about ten habaneros for a pound of chicken. It turned out really good. Being Hispanic, we all love spicy food.

HP: Did you have a favorite ingredient back then?

JS: I’ve always liked to experiment, so I don’t have a favorite particular ingredient. Every time I [looked at] recipes I wanted to do something different. Even today, in general, I just like using everything. If [it’s] something I’ve never used before, I’ll read about it and try to learn from that.

HP: What is your favorite kitchen tool now?

JS: I guess my knife. One of my sous chefs actually got me this really nice slicing knife and I love that. Anytime I have to butcher PSMOs (beef tenderloin) or fish, vegetables, I use it for everything. It’s a nice utility knife.

HP: What about when you were little?

JP: I used to love peeling things. When my mom made caldo she always asked us to peel carrots, or chayote squash or potatoes. It was fun to get a peeler and start peeling whatever it was.

HP: Did you surf or skate?

JP: I skated. That was a long time ago. We actually had a GoPed too, it would reach 30 to 40 miles-per-hour. I have a big scar from the muffler burning the shit out of my calf. (pauses) We skated for a while, I was never really that good, but I remember my first drop-in. I dropped into this bowl, it was an 8 foot drop and I just ate shit. I kinda got scared after that.

HP: Did you have pads on?

JS: No, no pads or helmets.

HP: Did you used to have a wallet with a chain?

HP: How do you dress them?

JS: If I’m making them at home, typically I’ll bacon-wrap them and make guacamole. That’s how I grew up eating them at home. But other than that, straight ketchup and a little mustard.

HP: So, your dad sent you to Paris with his credit card when you were 16…

JS: It was a fun experience, 30 days. My Dad looked at the credit card bill when I got back and was like ‘wow, you really went to town didn’t you.’ I told him, ‘well yeah, I’m a 16-year-old kid with a credit card in Europe.’ He’s one of those guys that would get us things we wanted as long as we appreciated them. Growing up, [at restaurants] he would let me order anything as long as I ate it all. Luckily for me I was a good eater. I’m really big on travel. My dad was one of those guys who hated being home, he loved to take [our family] and travel and that’s how I am too.

HP: Why did you choose to go to culinary school in Las Vegas?
JS: [There was] a master chef as a dean at the [The Art Institute of Las Vegas] and being that there were only 100 master chefs at the time, that kind of drove me to go there. I loved that school. I learned so much. We actually had breakfast with Thomas Keller at Bouchon, it was amazing. Our instructor took us to lunch [there] and we were in this little room, 14 of us. [All of a sudden] the doors opened and Thomas Keller walked in with all these servers carrying pastries on trays.

That instructor made a big impact on a lot of stuff I’ve done. I look up to him. Once, he took us to this place where there were a whole bunch of 200-pound ice blocks. We all had chainsaws and just went to town.

HP: What was his name?

HP: What’s your favorite station to work on the line?
JS: I think sautée. Working with fish or chicken and sautée pans. I remember working at Cullen’s (In Clear Lake, closed now), it was a three to four-person line. We would do 200 to 300 covers and just get our asses kicked. I was originally working garde manger. [That station] got really busy. We had to do some desserts, salads, pizzas, sandwiches. One person doing all that. Then they moved me to sautée. Sautée was the most fun.

JS: Oh yeah, being in the heat? I love it. Typically, we will send our staff home early and it gives us (managers) a chance to work the line. To make sure your still in it and burning yourself. It’s always fun, not just being on the management side.

HP: Would you rather go see an animated romantic comedy starring Matthew McConaughey or work the omelet station at Sunday brunch service for a year?

JS: (no pause) I’d probably say ‘work the omelet station’ so I could get better at making omelets.

HP: Where do you get your inspiration from?

JS: From reading books mainly, and sometimes on Instagram. [I like] seeing what’s going on, what’s popular.

HP: What are you reading right now?

JS: On Baking from The Culinary Institute of America. We are getting ready to change our desserts here in the next couple of weeks. I’m trying to get inspired with different ingredients and techniques. In December, we did a menu sweep on our regular menu, we changed about half of it. 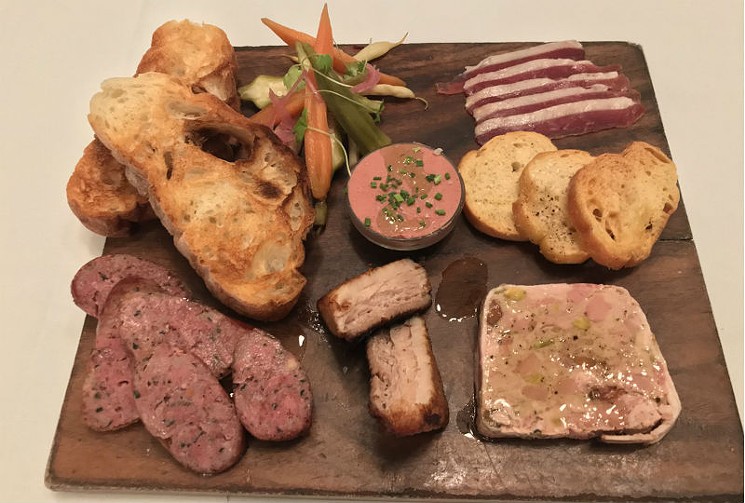 A mouthwatering mixture of hot and cold housemade charcuterie.
Photo by Kate McLean
HP: Which dish are you most excited about on the regular menu?

JS: One of things I like a lot is our charcuterie board (Brasserie 19 Charcuterie). It consists of five items and they are all house-made.

The lamb sausage has rosemary, thyme, garlic and a little bit of red burgundy wine to emulsify.

The pork belly is braised with about half a bottle of whiskey and apple juice. We braise it for two hours and then fry it, so it’s crispy, but moist and good. It’s super delicious and fatty, I think that’s one of my favorite parts.

The pâté has some cranberry and pistachios and course pieces of pork fat.

The chicken liver mousse is sautéed and made with Calvados and Cognac, finished with a little oil and salt.

The duck prosciutto… we get in Mulard duck breasts, the larger breasts, and cure them with all sorts of spices like allspice, coriander, fennel. It’s cured in salt for about for five days and then we let them air dry for another few days.

[The charcuterie board] is so fun because we can change it all the time. That’s one of my favorite things about it.

HP: What’s it like having a family and running a kitchen?

JS: It’s not easy. Right now, my kids are on my schedule, they don’t go to sleep until two in the morning. I have a two-year-old and an eight-month-old. I get out around ten or eleven, go home and shower, eat, and play with my kids. Coming from a self-employed family, I try to put time aside for my family.

HP: How did you meet your wife?

JS: At a club. When I was 21 I was working two jobs. I worked as a club promoter, we met there.

JS: It’s called Copa Cabana, downtown. We started talking a little bit here and there, I invited her out to eat and we hit it off. That was seven or eight years ago.

HP: If there were a Houston Chef Calendar which month would you be and why?

JS: I would say October because it’s the beginning of fall and fall is a good time of year to get product in. It’s also my birthday month and Halloween, one of my favorite holidays.