For those who’ve never made the pilgrimage to the great glass pyramid on the shores of Lake Erie, they could feasibly be forgiven for just assuming that the Rock and Roll Hall of Fame was in New York or Los Angeles. But no, since the doors first opened, the institution has called “The Forest City” of Cleveland its home.

It’s become a (if not the) key to the city’s contemporary identity, and its main and most popular attraction. To date, Rock Hall President/CEO Greg Harris notes that the venue has drawn more than 13 million visitors from around the world (including myself, who wrote about taking my Gen Z son there just pre-COVID in Part I and Part II). Even the city’s main airport double as an advertisement for the Hall. 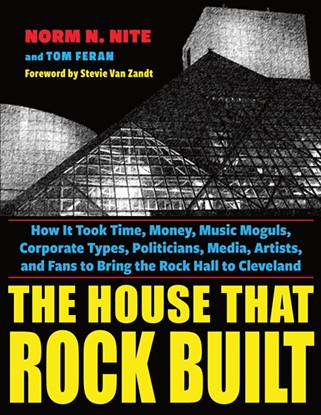 Book cover
How the Rock Hall came to Cleveland is the subject of this behind-the-scenes book, out just in time to commemorate the Hall’s 25th anniversary as a building and destination. The road was never smooth to travel, and along the journey, the detours were frequent and the potholes were big.

Cleveland had plenty of rock bona fides. It’s where DJ Alan Freed popularized (though, not as some think, invented) the term “rock and roll” on the airwaves. And it was the site of what is considered the first-ever rock and roll concert, the “Moondog Coronation Ball” held on March 21, 1952 at the Cleveland Arena (“Moondog” was Freed’s early on-air nickname).

The multi-act bill was headlined by Paul Williams and Tiny Grimes, and the $1.50 ticket ($1.75 at the door) got you rock and roll music from 10 pm-2 am. However, it was shut down by Cleveland police less than an hour after its start when thousands and thousands more teenagers showed up than expected, outstripping the venue’s capacity. Not surprisingly, a riot ensued.

Over the decades, Cleveland became known as a “rock town” celebrated in song (see Ian Hunter’s “Cleveland Rocks,” later used as the theme to “The Drew Carey Show”) and where plenty of big name artists – most notably Bruce Springsteen – cultivated rabid regional fanbases before they broke nationally.

So when the idea for a Rock and Roll Hall of Fame and Museum started gaining traction in the early ‘80s, Cleveland was early out of the get with advocating for the destination. How they got it was due to an impressive combined effort of committee members, local and state politicians, city businesses and civic boosters, and the public.

Eventually, their enthusiastic and well-planned efforts dwarfed competing bids of other cities with varying degrees of interest like Chicago, Memphis, New Orleans, San Francisco, and even New York. When USA Today held a national phone call-in poll for people to vote on a home for the Rock Hall (at 50 cents a pop!), Clevelanders got busy and won with 110,000 calls. The next closest competitor – Memphis – garnered a paltry 7,200 by comparison.

The eventual site for the hall was still undecided when the first induction ceremony was held in 1986. And when Cleveland got the nod later that year, there was still a lot of work to do and money to be raised for construction. The initial price tag of $25 million ballooned to an eventual $92 million.

John Lennon's passport is one of thousands of artifacts on display that tell the story of the music at Rock and Roll Hall of Fame in Cleveland.
Photo by Bob Ruggiero
A little over $5 million of that went to celebrity architect I.M. Pei – who had designed both the John F. Kennedy Library and Museum at the outdoor pyramid at the Louvre in Paris. Pei wasn’t even familiar with rock and roll as a music, so the 70-year-old took a crash course using a portable cassette player. After hours of listening, he came away with the one word that he thought represented the music and must be reflected in his design: “energy.”

A switch of locations and many doubters that Cleveland could get the job done as the years passed put the whole thing in jeopardy. But ground was finally broken on 1993, and the Hall itself opened to fanfare, a concert, and street celebration two years later. The building has undergone several expansions and renovations since then, with the massive archives and library moved just down the road.

Longtime DJ and author Norm N. Nite (who worked for decades in Cleveland) is not exactly the most subjective writer here. He was on the original committee that fought to bring the Hall to his city and on board for the entire process. They alternately clashed or cajoled the “New York Group” of backers and industry heavy hitters actually who would make that fateful location decision.

The New Yorkers were spearheaded by Atlantic Records’ Ahmet Ertegun. He founded the Rock and Roll Hall of Fame Foundation in 1983 and recruited a planning group that included Rolling Stone publisher Jann Wenner and others. One wonders if a less-connected author might have seen things differently, though the firsthand tales are valuable. It’s not clear how much co-author/longtime Cleveland Plain Dealer journalist Feran contributed to the final project.

Elvis Presley is one of a handful of artists to have their own dedicated and permanent display areas at the Rock and Roll Hall of Fame in Cleveland.
Photo by Bob Ruggiero
However, the book overall is an informative and quick read, populated with a trove of photos and remembrances. Like when Chuck Berry closed the seven-hour opening concert with a shambolic “Rock and Roll Music” and simply duckwalked off the stage, leaving Bruce Springsteen and the E Street Band (who were backing him) abandoned and hanging, all playing in different keys trying to follow Berry’s lead.

When asked to go back outside and bring things to a proper end, Berry simply took his guitar case, stretched out his arm, wagged his finger reproachfully and said “Uh-uh-uh. That’s not in the contract.” And then he got into his car and disappeared into the night.

The Rock Hall’s live induction ceremony and show to welcome the Class of 2020 (performers Depeche Mode, the Doobie Brothers, Whitney Houston, Nine Inch Nails, the Notorious B.I.G. and T. Rex along with non-performers Irving Azoff and Jon Landau) was set to take place in Cleveland on May 2 this year. Then it was cancelled to due to COVID and rescheduled for November 7. Now, that live event too has been cancelled, and instead there will be a pre-packaged special on HBO the same day.

And for those who still think “Why Cleveland?” as home for the Rock and Roll Hall of Fame, The House That Rock Built counters back with this simple declaration: “Why not Cleveland??”

For more information on the Rock and Roll Hall of Fame, visit RockHall.com
KEEP THE HOUSTON PRESS FREE... Since we started the Houston Press, it has been defined as the free, independent voice of Houston, and we'd like to keep it that way. With local media under siege, it's more important than ever for us to rally support behind funding our local journalism. You can help by participating in our "I Support" program, allowing us to keep offering readers access to our incisive coverage of local news, food and culture with no paywalls.
Make a one-time donation today for as little as $1.