It's no secret that Houston is currently in love with the fried chicken sandwich. While not everyone is a Chick-fil-A or Wendy's fan, there are a wealth of eateries around town serving up variations of the lunchtime specialty. In fact, we've been noticing so many, here are five brand-new chicken sandwiches that prove the trend is far too tasty to be a fleeting one.

Hot enough to call for a cold beer, but not so hot that you'll be in pain, Hopdoddy's new chicken sandwich — inspired by Nashville's hot chicken —  is unique to the recently opened Rice Village location. It's basically everything you could ever ask for in a midday meal. It's both crunchy and tender. The fiery sauce is placated by a stack of cool, crunchy slaw. And it's messy as all get out. Thankfully there are rolls of paper towels on every table. $9. 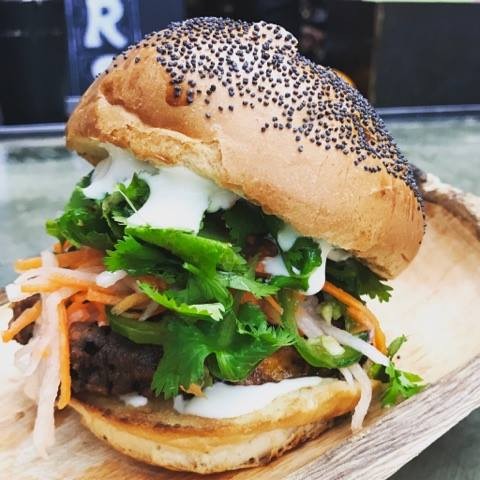 The ultra-crispy chicken breast at Midtown gastropub Wooster's Garden is Vietnamese-inspired, starting with a boneless chicken breast that chef Brandon Silva brines in pho broth, which means the meat retains its juiciness and seasoning despite its decidedly crunchy outer layer. Topped with daikon radish, carrot, cilantro, mint and jalapeño, the sandwich also gets a slather of rice wine mayo and fish sauce vinaigrette, making for one great bowl sandwich of pho ga. $11 (plus $3.50 more for fries). At this newly opened fast-casual spot at Fountain View and Richmond, chef Ben McPherson does in fact turn out a mean classic variation for fried chicken sandwich purists. A bit of slaw. A crisp and crunchy yet tender chicken breast that comes spicy or regular. The chicken used here is considered the "wagyu" of the poultry world, sourced from Crystal Farms Ranch, but that being said, it won't break the bank. Heights residents can also look forward to a new location at 2400 North Shepherd this summer, opening adjacent to the new H-E-B. $12.45, including a side and drink. 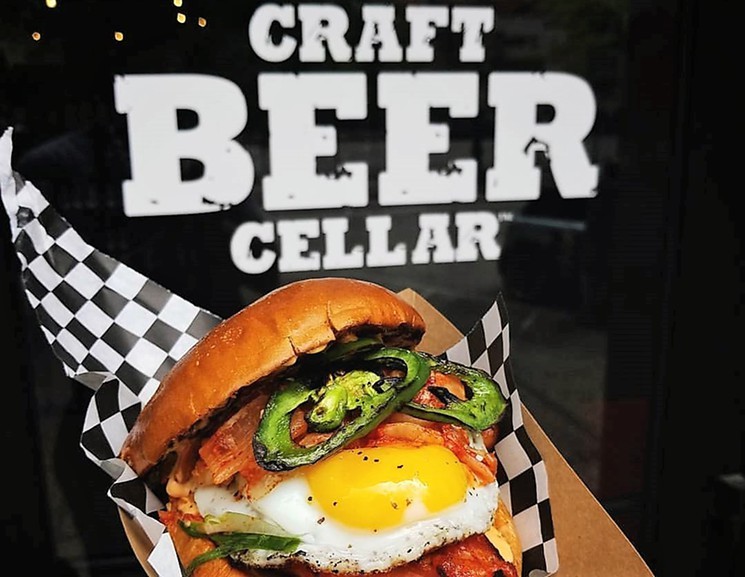 Okay, okay. So this chicken sandwich isn't exactly deep fried, but it is totally smokin', folks.  You won't find this chicken "sammy" on the Wokker truck, but only at its newly opened kitchen inside brew mecca Craft Beer Cellar downtown, where you can eat at the bar or take your food to go...in fact, a fully functioning take-out window is expected to open in the next few days. Combining Korean flavors with a Houston twist, the gochujan (chili pepper paste) smoked chicken itself is mildly sweet and spicy, and a sunny-side up egg cloaks the bird in added richness. Meanwhile, crunchy grilled jalapeños, pickles, kimchi and sriracha aioli don't overpower the sandwich, but create perhaps the best-dressed homage to dak bulgogi (korean barbecue chicken) ever to reside on a brioche bun. The seasoned curly fries that come on the side are ten times better than any fast-food joint's. $10 with fries. Bosta Kitchen's fried chicken sandwich does hold up if ordered to go.
Photo by Gwendolyn Knapp

This Museum District coffee and wine bar recently upped its brunch game, offering the beloved a.m. meal every day from 8 a.m. to 2 p.m. On that brunch menu, you'll find one of the most well-balanced fried chicken sandwiches around. Deceptively simple in its appearance and flavor, this sandwich comes on a grilled Kraftsmen Baking challah bun topped with shredded cabbage, Dijon that gives a faint nostril-clearing kick, and a mildly sweet Russian dressing, all of which serve the crisp bird, its breading quite light and panko-esque, quite well. This is also the least messy fried chicken sandwich of the bunch, for those of you who dare dine in silken threads. $12, including chips, salad or fries.