My favorite Spot for Bo Ne, or Vietnamese Steak and Eggs 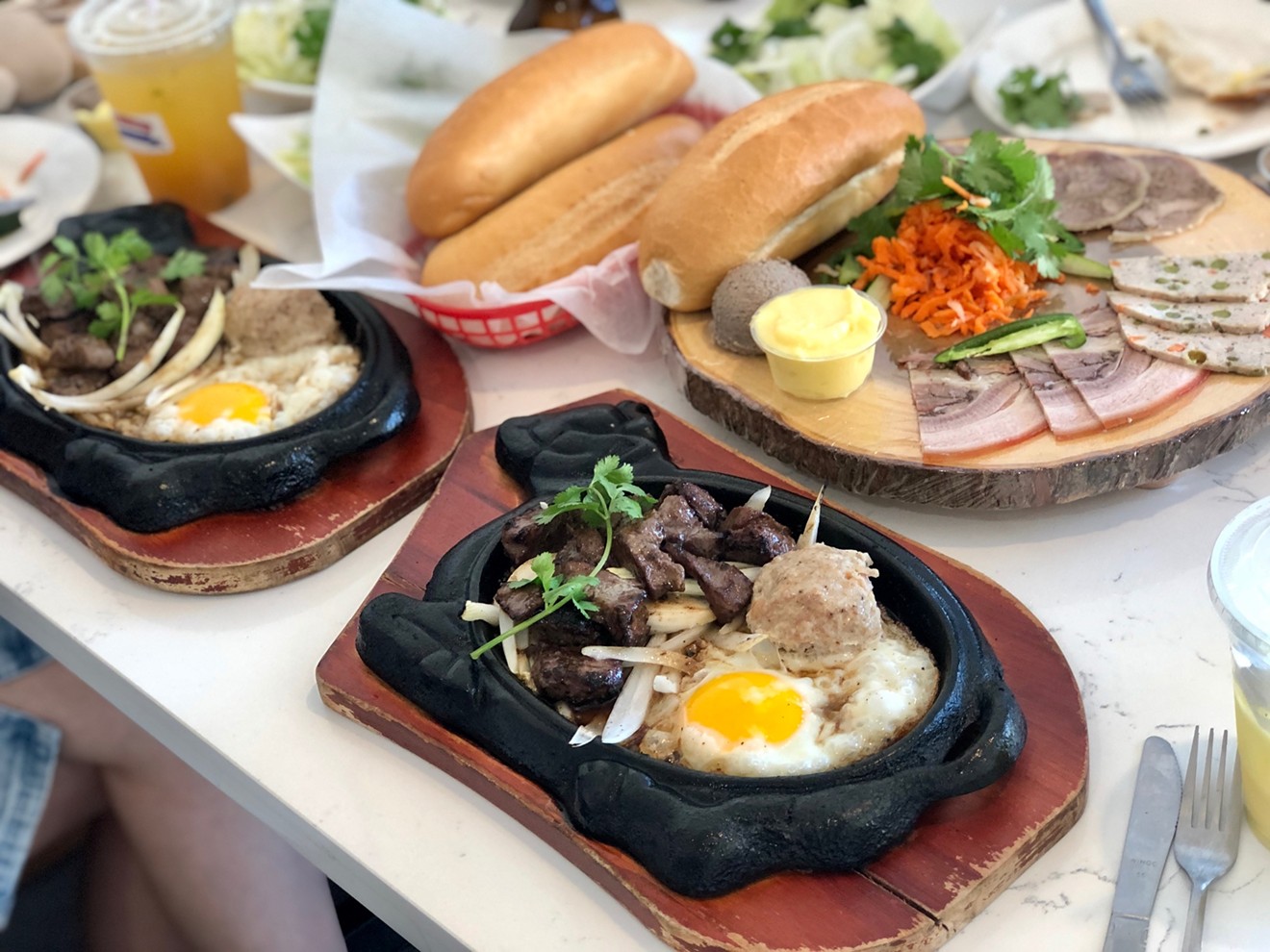 I can't get enough of the Bo Ne at My Baguettes Photo by Mai Pham
Where do you go when you’re craving a steak, but don’t want to go to a steakhouse and don’t want to spend an arm and a leg? I’m going to let you in on a secret: When I want to taste juicy, full-flavored beef on a budget, I go for Bo Ne, or Vietnamese steak and eggs.

Like the American version of Vietnamese steak and eggs, Bo Ne is probably more of a breakfast or brunch dish, but lately it's been popping up on menus all over town and offered throughout the day. You can get it at Bo Ne Houston, which has been around forever, and Blacksmith in Montrose, which has had it on the menu since it first opened in 2013. You can also get it at places like Les Ba’get in the Garden Oaks/Oak Forest area, at the Katy Asiatown location of Yummy Pho and Bo Ne, at the Asiatown spot called Pho Bo To and Bo Ne. 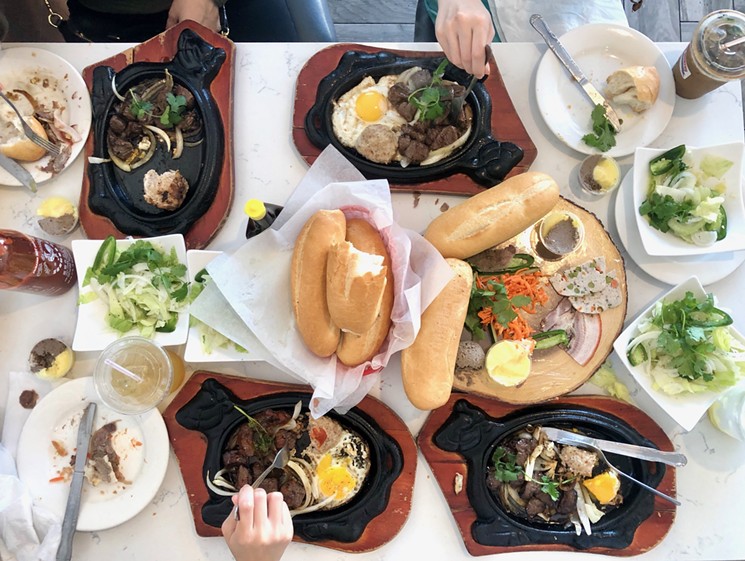 When the whole table orders Bo Ne! (Also pictured: The cold cut appetizer plate)
Photo by Mai Pham
Of the many places I’ve tried, the one that I find myself returning to over and over again is My Baguettes on Bellaire Boulevard, in the Saigon Houston Plaza near Wilcrest. This little mom and pop banh mi shop debuted last year under the name Mai’s Baguettes, but was rebranded to My Baguettes after a trade name dispute with Mai’s in Midtown.

Marketing themselves as a scratch kitchen, My Baguettes's banh mi's were kind of bland at first. But they've made improvements and they've gotten better and better in the past year. Currently they are using a thin crispy baguette as opposed to the oblong banh mi roll you see around town. I recommend their chicken banh mi, made from shredded chicken mixed with caramelized shallots, which for me is the tastiest and most unique of the different banh mi’s on the menu. I also enjoy their mint cafe sua da and their house-made corn milk, made with condensed milk to amplify the natural sweet corn flavor.
click to enlarge 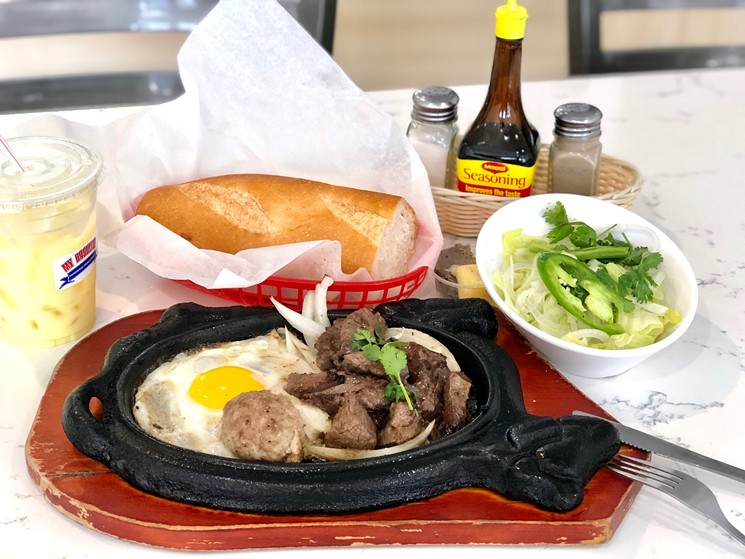 Their version of Bo Ne, which they debuted earlier this year, is simply stellar. Arriving on a sizzling cast iron cow-shaped platter, you get chunks of ribeye in a savory brown sauce with onions, a sunny side up egg and a xiu mai meatball. I love how the smoke from the dish leaves an aroma in its wake, and the fact that it smells delicious even before taking a bite. On the side, you get a toasted baguette, a simple side salad dressed with vinaigrette, along with a plastic saucer filled with house-made pate and mayonnaise.

The quality of the meat is probably what gets me the most. The chunks of marinated ribeye are tender and juicy, with a Vietnamese-French flavor that complements the Maggi sauce on the table (You can add droplets of Maggi if you want more seasoning). I like to cut through the egg and watch the runny yolk ooze on the platter, break off a piece of crusty French bread, and dip it in the yolky-gravy in between bites of the beef. The salad helps to lighten up the dish so it doesn’t feel so heavy, and the meatball xiu mai is just a bonus. Ringing in at $11.99, it’s a steal.

My Baguettes closes at 6 p.m., so it’s not a place where you can go for a leisurely dinner, but the last time I asked, they said it was perfectly fine to BYOB (there is no corkage/service, but they don't have wine glasses, so you'll have to bring those, too). I have a bottle of red that’s going to go perfect with that Bo Ne, so I plan to get there around 5 p.m. one day for a low-key, low-budget steak night. I can picture it already.
KEEP THE HOUSTON PRESS FREE... Since we started the Houston Press, it has been defined as the free, independent voice of Houston, and we'd like to keep it that way. With local media under siege, it's more important than ever for us to rally support behind funding our local journalism. You can help by participating in our "I Support" program, allowing us to keep offering readers access to our incisive coverage of local news, food and culture with no paywalls.
Make a one-time donation today for as little as $1.