Late Night at The Rice Box 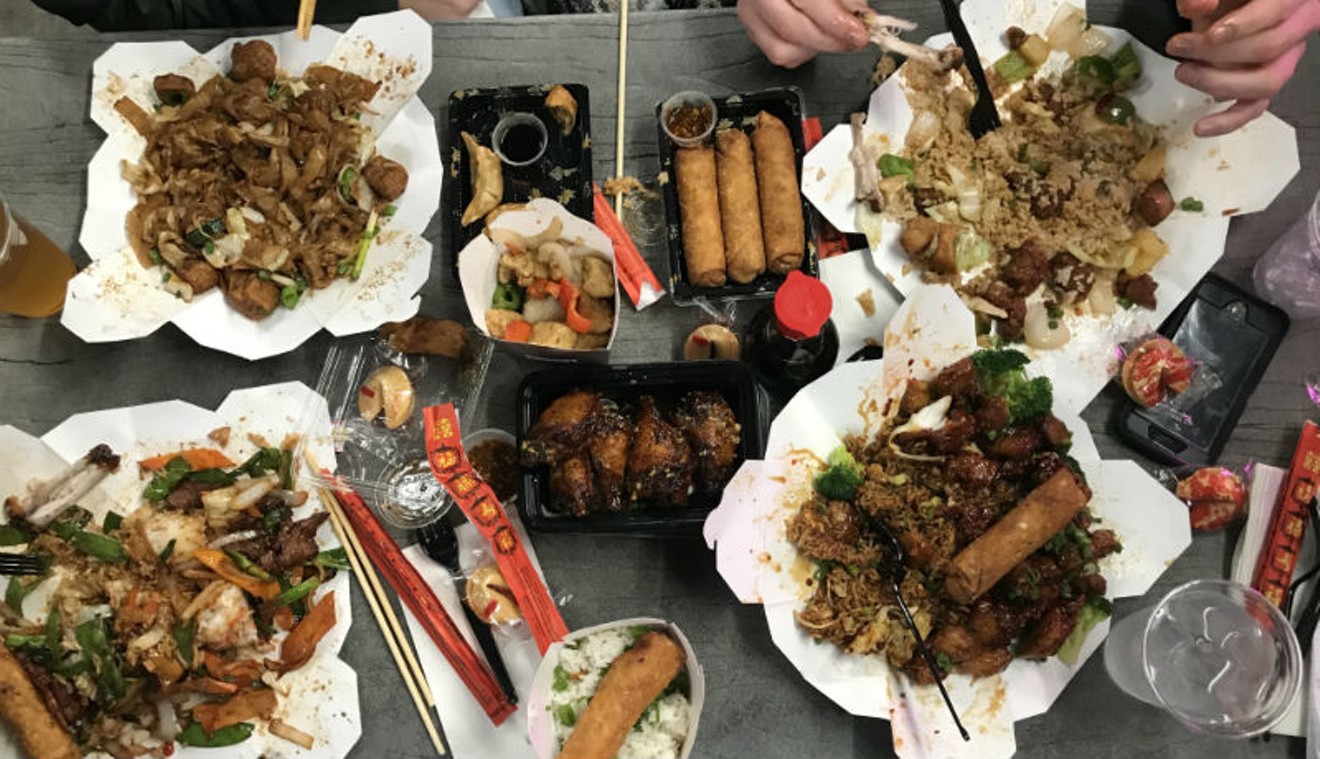 Check that spread— eggrolls everywhere. Photo by Kate McLean
First things first, does everyone know that a rice box can be unfolded to serve as a plate?

Go ahead, divide your friends into two categories now: those who knew, and never told you (JUSTIN) and those who are also just now crawling out of the cave.

So there you are, it’s almost midnight, and you’re craving Chinese food. Shhh, don’t just blurt it out. Your manipulation of the others must be quietly machinated. Some loud mouth could easily derail the plan by suggesting tacos, or chicken fingers, or pizza. But once you start craving Chinese—it’s over; only that cuisine will satisfy. So, be cool. Here are a few subliminal messages you can drop:

“Bangin’ eye liner tonight, it reminds me of that Matt Damon great wall of China movie. Did you see it? Yeah, me neither.”

“What would you rather—yacht party off Mykonos with all the fried rice you can handle or babysit a Husky with diarrhea?”

“Remember that one time— EGG ROLLS.“

Ease into it, but remember, nothing seals the deal like whispering “General Tso” in ya boy’s ear.

While we used to dive head first into overflowing boxes of General Tso’s outside of La Grange on Friday nights, now diners can more easily access The Rice Box at their 5 Greenway Plaza location or late night in the Heights. While the Heights location is geared for take-out, bright neon décor and the brink of starvation often bids you unfold the box on site.

“I feel like I’m in Blade Runner—in the streets of Japan.” Bobby Wood said as we settled into the picnic table. Electronic sound waves and heat lamps warm the patio, skyscraper wall art colors the walls. Inside is good for one’s and two’s, outside is better for three’s and four’s. Go ahead, bring a blankie while it’s still cold.

For around $10 a box, you’re walking away with literally a pound and a half of food. The Rice Box packs their boxes as if they were flying to Europe. Phone charger (rice), Euro’s (vegetables), they even downloaded a movie (eggroll) for the flight. The Rice Box endeared us all long ago with their hearty portions and the fact that everything is garnished with an egg roll.

Tofu or Cauliflower may be subbed as alternates to make it vegetarian (clap, clap, clap). It’s kind of like choosing John Mayer over Dr. Dre on the jukebox. Though there are times, when no one is around, and played very softly, that Slow Dancing In A Burning Room is nice. Extra sauce is only 50 cents and steamed white rice can be upgraded to fried rice, brown rice, egg noodles or broccoli.

The conversation stopped— and then started again as the Sweet Chili Wings + Rice hit the table. Six, hearty chicken wings twinkled with sweet chili glaze. “Whoa,” was the consensus as a box of steamed rice trailed closely behind. If you imagine most go-to-hell chicken wings as I do yoga sometimes with my girlfriend thighs, the wings at the Rice Box are David Beckham thighs, circa 2000. Sweet Chili is the crowd favorite while other flavors include; General Tso, Sesame, and Sweet & Sour.

The “Street Bites” section are smaller nibbles that are priced at around $6 each— still a generous portion. For $4, you can order even more egg rolls. Salt N Pepper Tofu, Cauliflower, or Eggplant. Popcorn Chicken, Chicken Dumplings. The sweet garlic sauce served with the Salt N Pepper Tofu was most dippable. How dare you say it’s nothing to me, baby you’re the only light I ever saw… Dammit, John.

Katharine Lee comes for the Tofu Chow Fun rice noodles every time. She doesn’t usually opt for tofu, but really enjoys this dish at The Rice Box. “They are flavorful and delicious!” It’s true, they are pretty addicting; sauce-soaked rice noodles garnished with bean sprouts and green onions. This category can also be upgraded with chicken, Chinese sausage, shrimp or beef.

The Garlic 4 Season Green Beans sounded absolutely delicious in the “Vegetables” section. It is nice to crush a plate of garlic sautéed greens. We’re going down... STFU, John.

Beverage-wise, iced, hot and “Nitro” teas are available. Nitro Tea is tea that’s been charged with nitrogen gas— it has a cute little tuft of foam on top. The absolute best thing to wash down late night Chinese with is beer. The Hitachino Nest White Ale was particularly good. Cold, crisp, botanical.

And don’t forget the fortune cookies! That’s where things get interesting.

A visitor you say?
Photo by Kate McLean
KEEP THE HOUSTON PRESS FREE... Since we started the Houston Press, it has been defined as the free, independent voice of Houston, and we'd like to keep it that way. With local media under siege, it's more important than ever for us to rally support behind funding our local journalism. You can help by participating in our "I Support" program, allowing us to keep offering readers access to our incisive coverage of local news, food and culture with no paywalls.
Make a one-time donation today for as little as $1.