A Sneak Peek at Uchiko Houston It only takes 72 hours to make this delicious short rib nigiri. Photo by Lorretta Ruggiero

Houstonians love their sushi. They also love their live fire. It doesn't take much to get barbecue enthusiasts  debating different woods and techniques when it comes to working with coals and flames. Though often it's centered heavily around meat and occasionally vegetables, others are taking the live fire technique to new heights.

Most of us don't think of open flames when it comes to sushi but much of Japanese cuisine makes use of hibachi, teppanyaki and yakitori preparations which use various forms of heat, from coals to propane. I don't claim to be an expert on Japanese grills but I got a chance to check out the eagerly-awaited Uchiko Houston last week, ahead of its May 23 opening and learned a thing or two from its chef de cuisine, Shaun King. A mural from local artist Camille Remington gives a calming touch to the decor.
Photo by Lorretta Ruggiero
King, a native of California, recently arrived in Houston from Portland, Oregon and according to him, he's here to stay, having bought a house here and also becoming a new father. He is a veteran of Japanese cuisine, with roles such as executive chef at Sushi Samba Las Vegas and also stints at Michael Mina's Pabu and David Chang's Momofuku Las Vegas. He joined Hai Hospitality, the parent company of Uchi and Uchiko, in 2021. 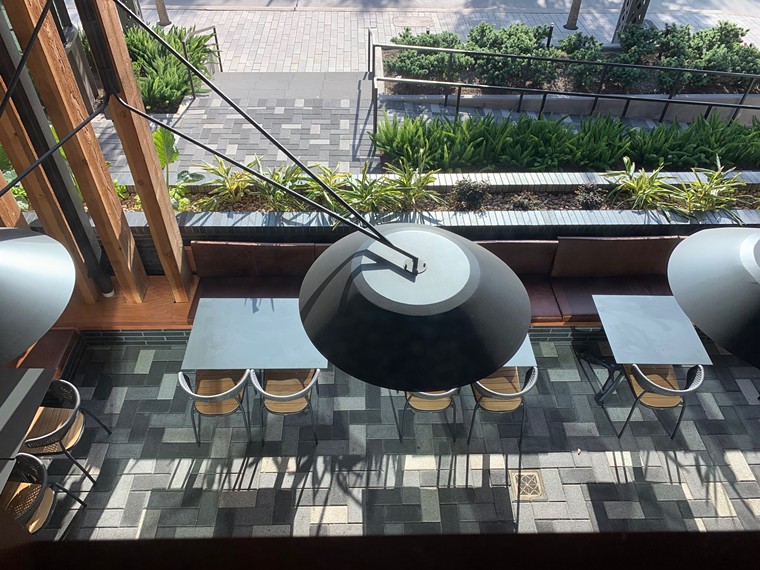 A view from overhead of the patio at Uchiko.
Photo by Lorretta Ruggiero
I arrived for the media preview and soft opening a few minutes early. After handing the valet my car, I looked around wondering where the entrance to the restaurant was among all the ritzy retailers at Zadok's Post Oak Place. I saw glass doors leading to a lobby and a hostess handing out glasses of sparkling wine. Thinking that was it, I took a glass and was told to head to the third floor. I thought that was odd but it was even more odd when I realized that I was being welcomed to an office reception. Realizing my mistake, I headed back down to the lobby and handed my glass back to the hostess with the confession that I had taken a few sips on the way up. 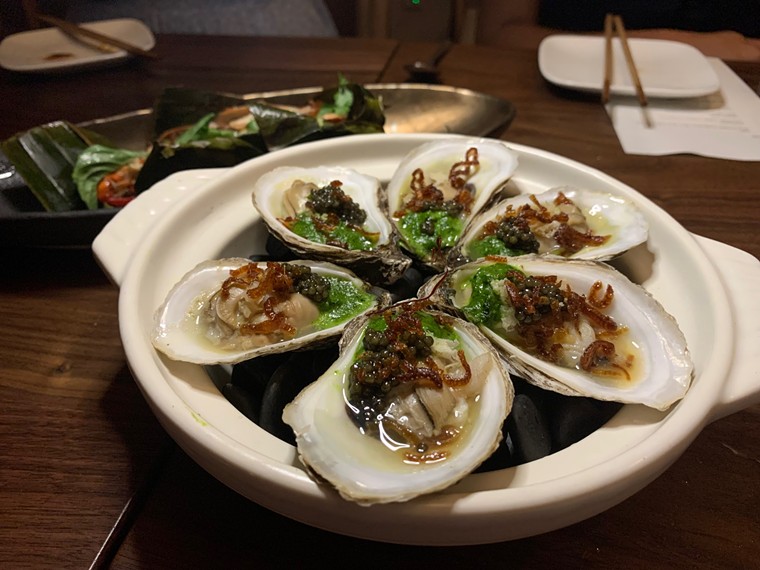 Hearth-roasted oysters get a Japanese kiss of koji.
Photo by Lorretta Ruggiero
I headed back out to the breezeway and discovered the inconspicuous entrance to the restaurant, after checking out its sleek patio. Upon entering, I was surprised to find the restaurant in full swing with friends and family enjoying the soft opening. I was shown upstairs to a private dining area and greeted with a cocktail, the Myoga. It's made with haku vodka, a Japanese white rice spirit, that is filtered through bamboo charcoal, a perfect offering from a restaurant that draws many of its flavors from coals and fire. 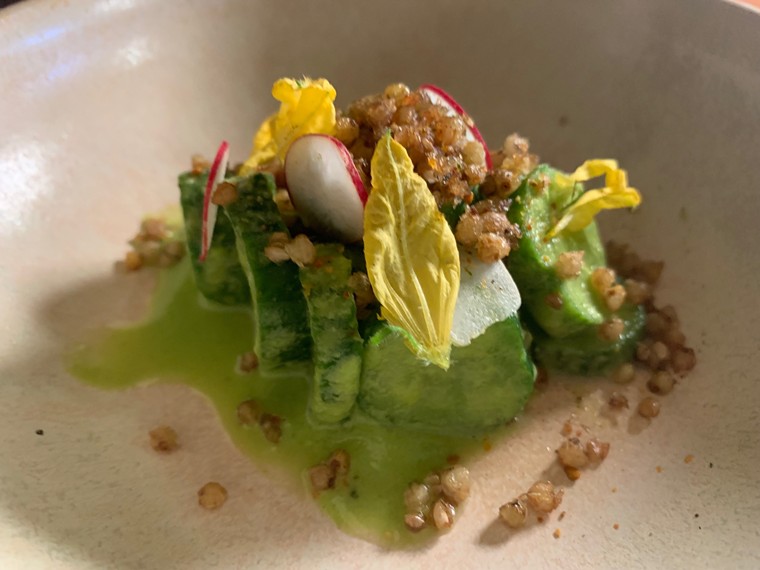 The Sunomono is a tangy course of cucumber and vinaigrette.
Photo by Lorretta Ruggiero
As I mingled with a few other food writers and a young Instagram influencer, Chef King arrived with an appetizer that was a fried bite of layered potatoes that have been pressed for days. It was a labor-intensive version of potato pave and it was very tasty, as fried potatoes often are. He returned later with what can only be described as a jalapeno popper gone uptown—-way uptown. It was a thin green pepper with an airy filling of cream cheese and fried in what I believed to be a rice paper wrap. That alone was delicious but the topping of tonburi, the seeds of the summer cypress tree, was a pop of citrus flavor. King explained that it was often referred to as vegan caviar. Though these two appetizers were not on the menu, guests can expect that King will be creating unique treats like these in the future. The kurodai with a bit of the Sunomono made a refreshing pair.
Photo by Lorretta Ruggiero
We were soon taken downstairs to another private dining area at the back of the restaurant. Whereas the upstairs private space had a few small windows, the second area was behind a wall of glass doors, separating it from the main dining area. It allowed for privacy but also gave a view of the action.

After we took our seats, we were introduced to members of the team including Chef King and Hai Hospitality's executive pastry chef,  Ariana Quant. Drinks were refreshed and we waited excitedly for the first dish. Though we had a menu, the sequence was "at the chef's discretion". Our first nigiri was kurodai, or black sea bream.  It paired perfectly with the Sunomono, a dish of cucumber and radish with a scallion vinaigrette. It had such a bright, refreshing flavor that I went back for seconds. 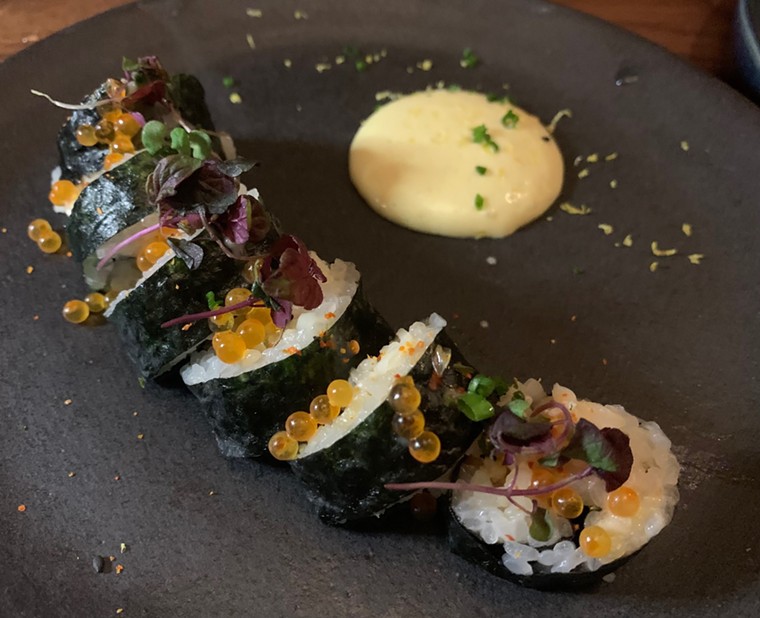 The Lobster Maki combines luxurious lobster with a creamy sabayon.
Photo by Lorretta Ruggiero
Next up was a lobster maki with miso buerre blanc that also had an amazing sabayon with a hint of lemon flavor from the yuzu. It was  followed by our first offering from the bluefin nigiri flight, the tuna loin. It was topped with orange zest that I thought was just a bit much and took away from the fish itself. However, the second part of the flight, the medium fatty belly melted in my mouth like butter. 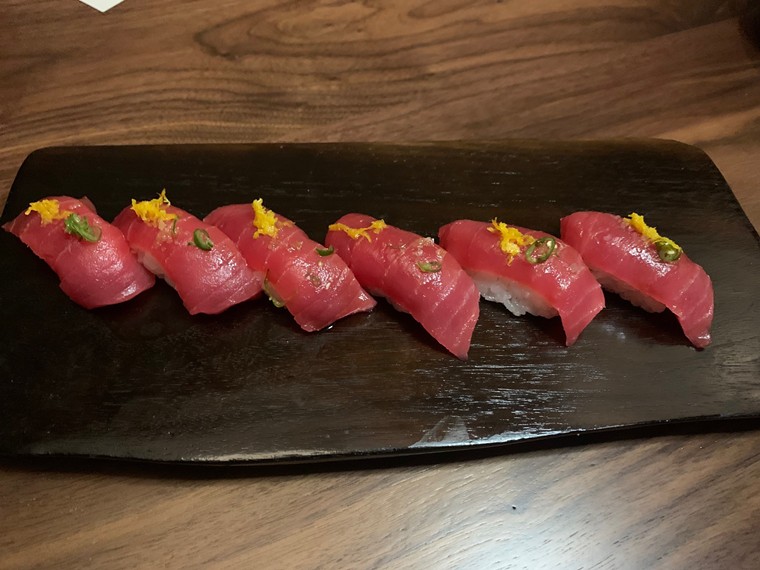 The bluefin tuna nigiri is topped with chili and orange zest.
Photo by Lorretta Ruggiero
We were then presented with the Hearth-Roasted Lobster, a pretty serving of lobster with tom kha, trumpet mushroom confit and umeboshi butter. I liked it but my tablemates were in raptures about it. We were also served Hearth-Roasted Oysters with koji creamed spinach and it was a tasty bite though I gulped it down quickly in order to catch up with the group being shown the wood-fired oven, led by Chef King. 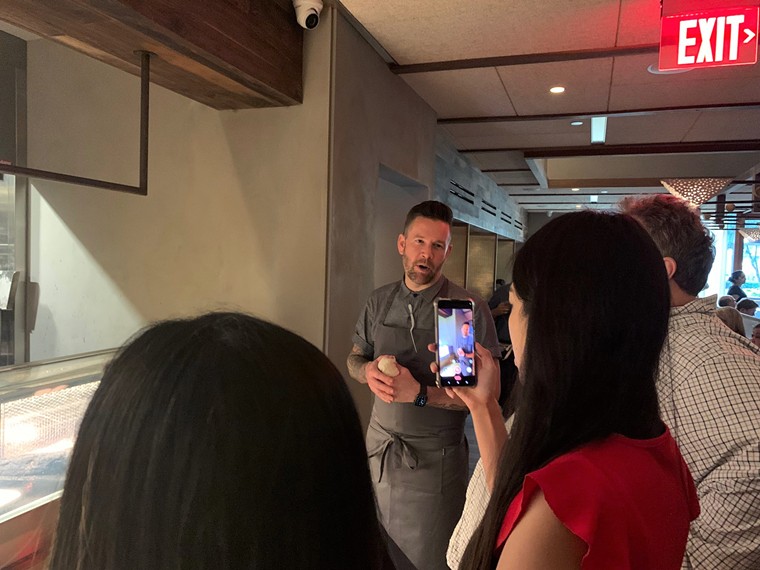 Chef Shaun King discusses the labor involved in creating unique dishes.
Photo by Lorretta Ruggiero
We stood in front of the counter watching the fully-masked crew as they painstakingly created the wonderful food we were enjoying. King pointed out the Beech Ovens behind them and described the various cooking techniques for the hot and cold dishes. We were handed a platter of king trumpet mushroom nigiri which actually resembled grilled pork belly visually. It was another melt-in-your mouth bite that was wholly unexpected from the rectangle of mushroom. 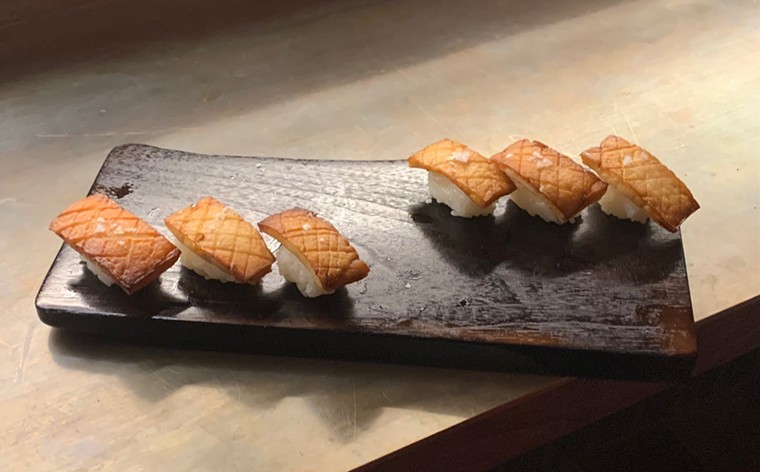 The king trumpet mushroom shines at Uchiko.
Photo by Lorretta Ruggiero
The next nigiri from the kitchen, a 72-hour sous vide short rib was so silky that I could have swallowed it without chewing. We then headed back to our table to let the next group talk with the chef. I ordered another beverage, the Island Heat. This cocktail will definitely be on my list on a return visit to Uchiko. The smokiness of the mezcal and charred pineapple agave was a perfect accompaniment to the dry-aged duck, even though that dish was not a particular favorite at our end of the table. The duck was perfectly cooked but the slices were difficult to eat in one bite. However, the dashi-braised, hearth-roasted cabbage was another vegetarian side at Uchiko that thrilled me with its flavor. 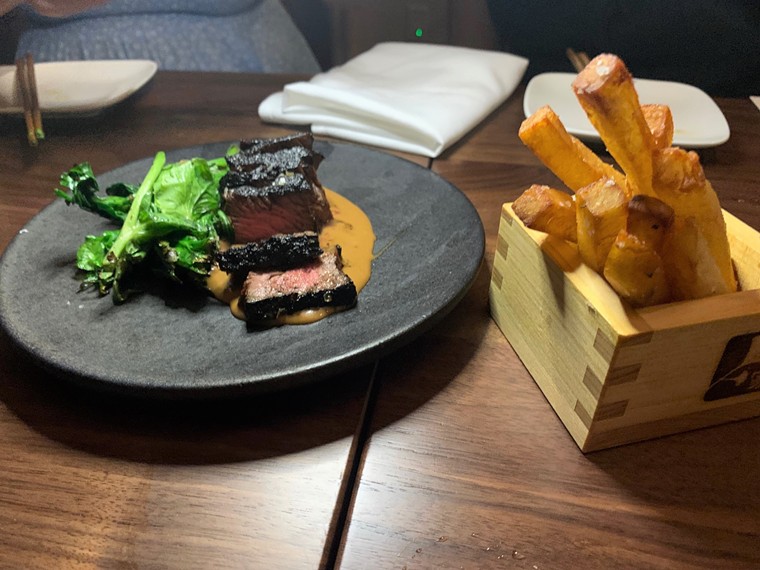 This wagyu cut gets seared four times.
Photo by Lorretta Ruggiero
Things were beginning to get a little heavier food-wise and our table was soon presented with the Texas Wagyu, a culotte cut of aged wagyu that was seared four times. I wasn't quite sure what that meant but it left the interior moist and tender with a nice, charred crust. The sauce itself was so delicious that I found myself dipping the accompanying duck fat French fries into it, though they definitely didn't need it. Duck fat frying is not overrated. 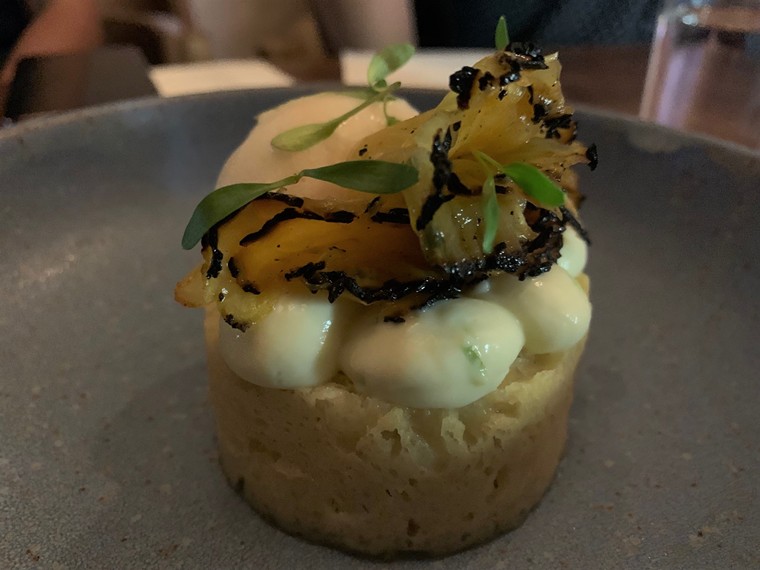 The Baba au Taki Whisky is a pineapple lover's dream.
Photo by Lorretta Ruggiero
We were all near capacity stomach-wise, except for a younger guy who was happily eating any remaining nigiri or maki that might have been missed. However, the show was not over. It was time for us to be wowed by Quant's creations from the sweet side. First, there was the Baba au Taki Whisky, a Japanese play on baba au rhum. Charred pineapple made a pretty rosette atop a light sponge and the pineapple flavor was further enhanced by the tepache sorbet. 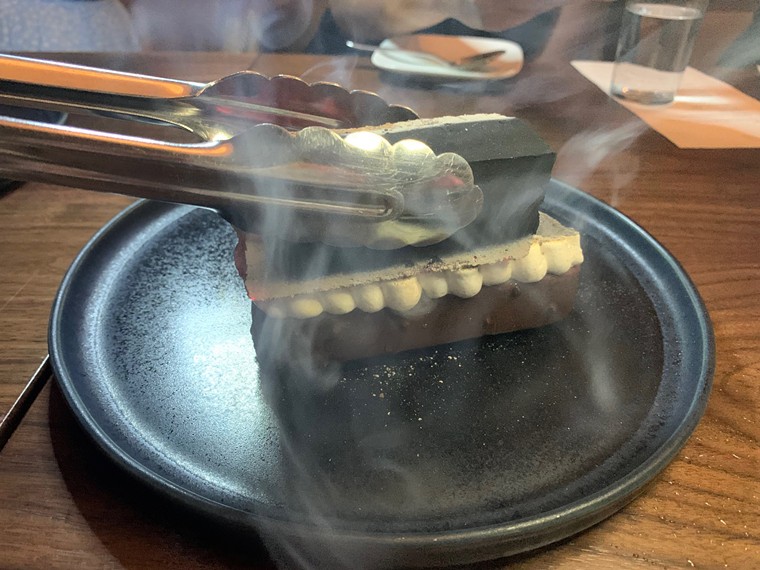 This ain't the campfire version.
Photo by Lorretta Ruggiero
Then came the dramatic finale of the S'mores. It was a decadent dark chocolate dessert with a slight flavor of raspberry. The marshmallow squiggle on top was toasted at the table with a rectangular charcoal of binchotan. It was an Instagram-worthy shot for my Instagram-happy tablemate.

While there are great sushi restaurants, and not-so-great ones as well, all over Houston, Uchiko stands out with its creativity and attention to detail. The menu has been carefully composed to offer guests a taste of the familiar along with bursts of the unusual, at least to many Western palates. It costs quite a bit more than the sushi choo-choo, but it's worth it. 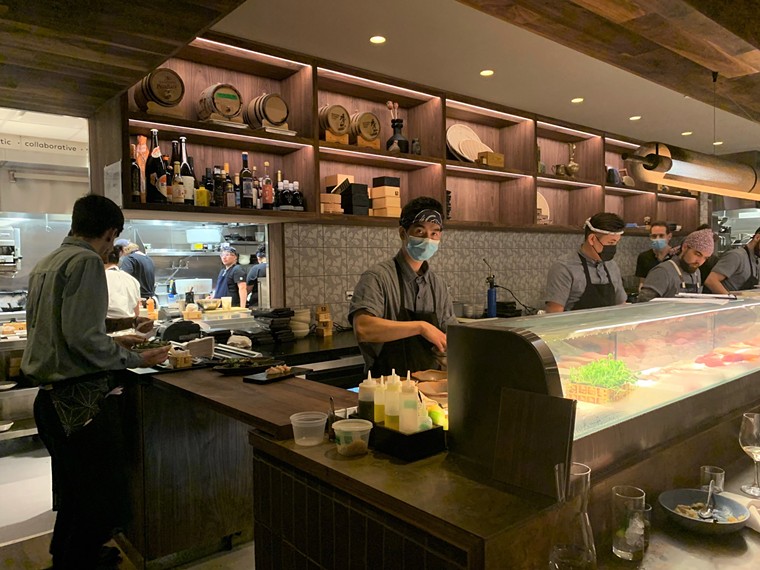 It takes a well-trained team to roll out this kind of food.
Photo by Lorretta Ruggiero
For big spenders, the restaurant offers two omakase, the Signature Tasting with five courses and the Chef's Tasting, with ten, both at market price. However, Uchiko also has a daily happy hour from 4 p.m. to 6 p.m. with less expensive selections of nigiri, temaki and tastings, plus 50 percent off bubbles.

Hours: Sunday through Thursday, 4 p.m. to 10 p.m.
Friday and Saturday, 4 p.m. to 11 p.m.
KEEP THE HOUSTON PRESS FREE... Since we started the Houston Press, it has been defined as the free, independent voice of Houston, and we'd like to keep it that way. With local media under siege, it's more important than ever for us to rally support behind funding our local journalism. You can help by participating in our "I Support" program, allowing us to keep offering readers access to our incisive coverage of local news, food and culture with no paywalls.
Make a one-time donation today for as little as $1.