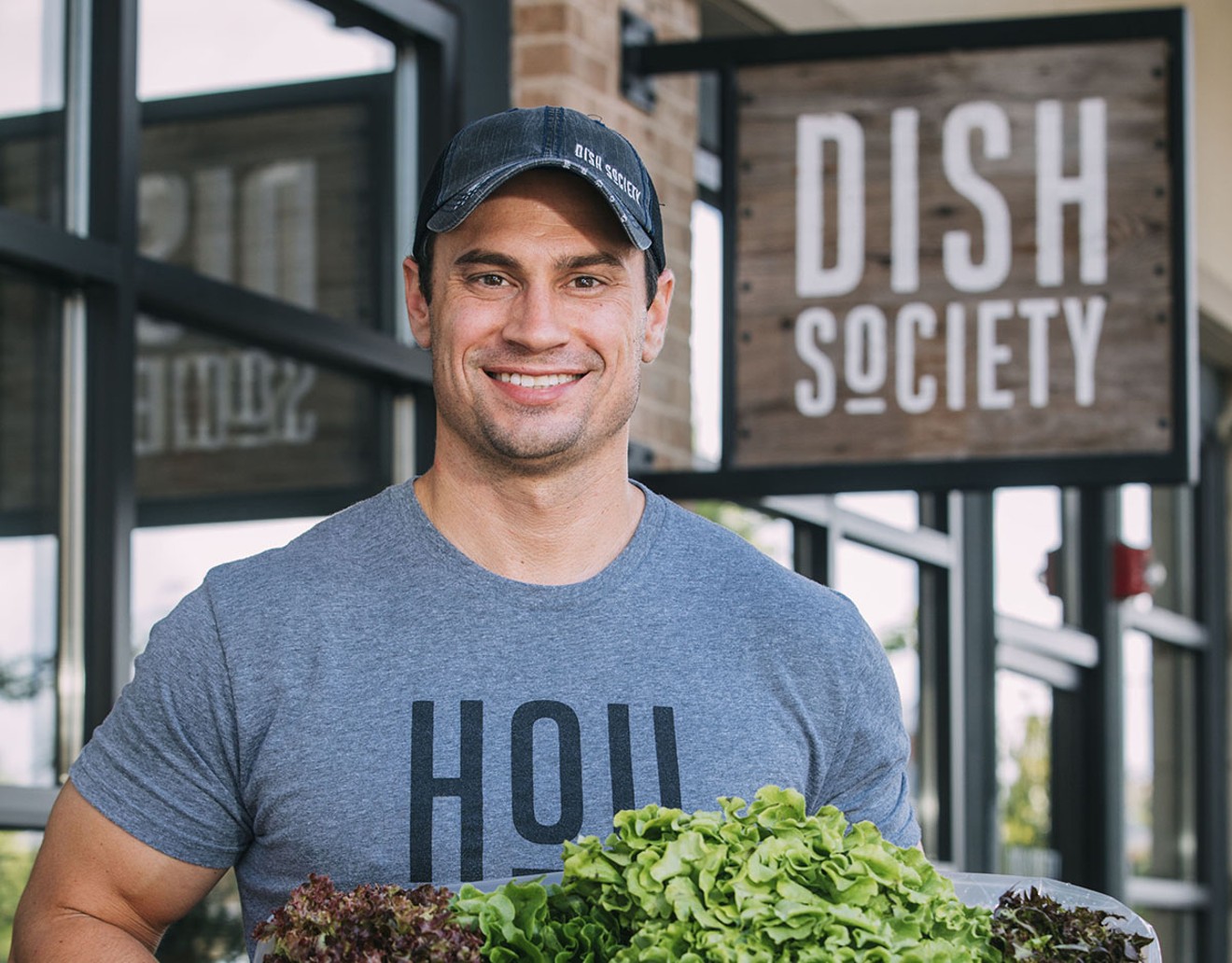 Aaron Lyons, founder and owner of Dish Society. Photo by Troy Fields
Three years after making a splash as Houston’s first casual, farm-to-table eatery, Dish Society is still hoping to change the way you eat, trendy buzzwords and all, and that’s for the better. According to Harvard’s T.H. Chan School of Public Health, a shift toward sustainable farming is becoming absolutely crucial as the world’s population increases and food supplies become less secure, less diverse and in some cases overwhelmingly bad for the environment (e.g., greenhouse gas emissions from large-scale livestock facilities). But in an industry that works via supply and demand, that means this issue is one for the consumer. More than ever, it’s imperative that people become interested in locally produced, healthier foods, and that’s where Dish Society comes into play.

Just because a food is locally grown and healthier for the environment doesn’t mean it can’t have flavor. Dish Society, with locations in the Galleria and Katy, and coming soon to Memorial, focuses its menu on an array of great eats, from salads to decadent Texas- and Southern-inspired comfort foods, from chicken and biscuits to shrimp and grits.

Aaron Lyons was a UT graduate student who spent his weekends scouring Austin’s farmers’ markets for produce and local eats when he got the bug to open his own locally sourced restaurant. At the time, farm-to-table was already a buzzword among many restaurants, especially in Austin, one that was supposed to indicate an emphasis on sourcing locally and supporting local farmers. Unfortunately, for many places, it was just a marketing ploy. You’re not as likely to hear the catchphrase in 2017 as you were when Dish Society first opened in 2014.

Back then Lyons didn’t really know anything about running restaurants, and definitely didn’t know a soul in the city of Houston, but he decided to leave Austin anyway and focus his efforts on the relatively big void in the Bayou City when it came to casual restaurants specializing in locally sourced foods.

“When it comes to farm-to-table in Houston, you’d think Underbelly and Oxheart, the fine-dining spots,” Lyon tells the Houston Press. “But when it came to casual food, there was a hole in the market. There was nowhere to go that wasn’t supplying produce from big-box companies, hauling in vegetables, fruits and meats from states away, even countries away.”

Lyons turned to Houston-area farmers to help make his restaurant dream a reality, explaining to local purveyors at the Eastside Farmer’s Market what his idea was, building strong relationships with them and getting them on board.

Today Dish Society is one of the biggest buyers for dozens of local farms, including Atkinson Farms, 44 Farms, Black Hill Meats and Sustainable Harvesters. “Traditional and conventional restaurants buy from big-box suppliers,” Lyons explains. “Small farmers don’t have logistic systems and technology, so there are some challenges with that.”

If there is a heavy rain or freeze, and produce will be affected, the restaurant must plan accordingly. Astoundingly, Hurricane Harvey did not really affect the restaurant’s supply chain. “Many of our suppliers didn’t get hit very hard,” Lyons explains. “So we never had to turn to big suppliers for anything.”

Dish Society employs a full-time supplier relations coordinator, who meets with new suppliers, constantly sees what produce and proteins are available locally, and always has a pulse on product and seasonality — when certain vegetables will be growing or diminish in quality. The restaurant then makes changes to its menu based on seasonality and supply.

In terms of sustainability being embraced by more Houston restaurants and residents, it’s already happening. “We’re getting approached by bigger box suppliers and they are carrying local stuff now,” Lyons says. “Sysco, Brothers Produce, Chefs’ Produce are all working with local produce now. Distributors and the industry are starting to adapt. It’s not a standard yet, but it’s starting to happen.”

Plus, local foods are just a better product. “Think about it,” he says. “It’s not sitting on a truck for seven days coming from California. Our produce is fresh from the ground and tastes better. It’s higher-quality product.”
For menu items that can’t be sourced locally, including quinoa, avocado, pineapple and salmon, the restaurant will use only organic, sustainably farmed options. “Even our corn nuts come from Atkinson Farms. Our seeds, our honey, our organic fountain drinks, everything is from Texas. Amy’s ice cream, Houston Hot Sauce, Greenway coffee, even our pancake mix and flours, cheeses and eggs, you can get most of it year-round in the state.”

That’s a good thing, because Dish Society’s menu items, from the pork belly bites to the chimichurri steak tacos with 44 Farms grass-fed steak, local cabbage and housemade sauce, are crave-worthy just about any old time.

This article is part of our annual Best of Houston issue. Check out all the winners here.