Openings and Closings: Cafe Annie Will Rebrand, Canopy Will Close 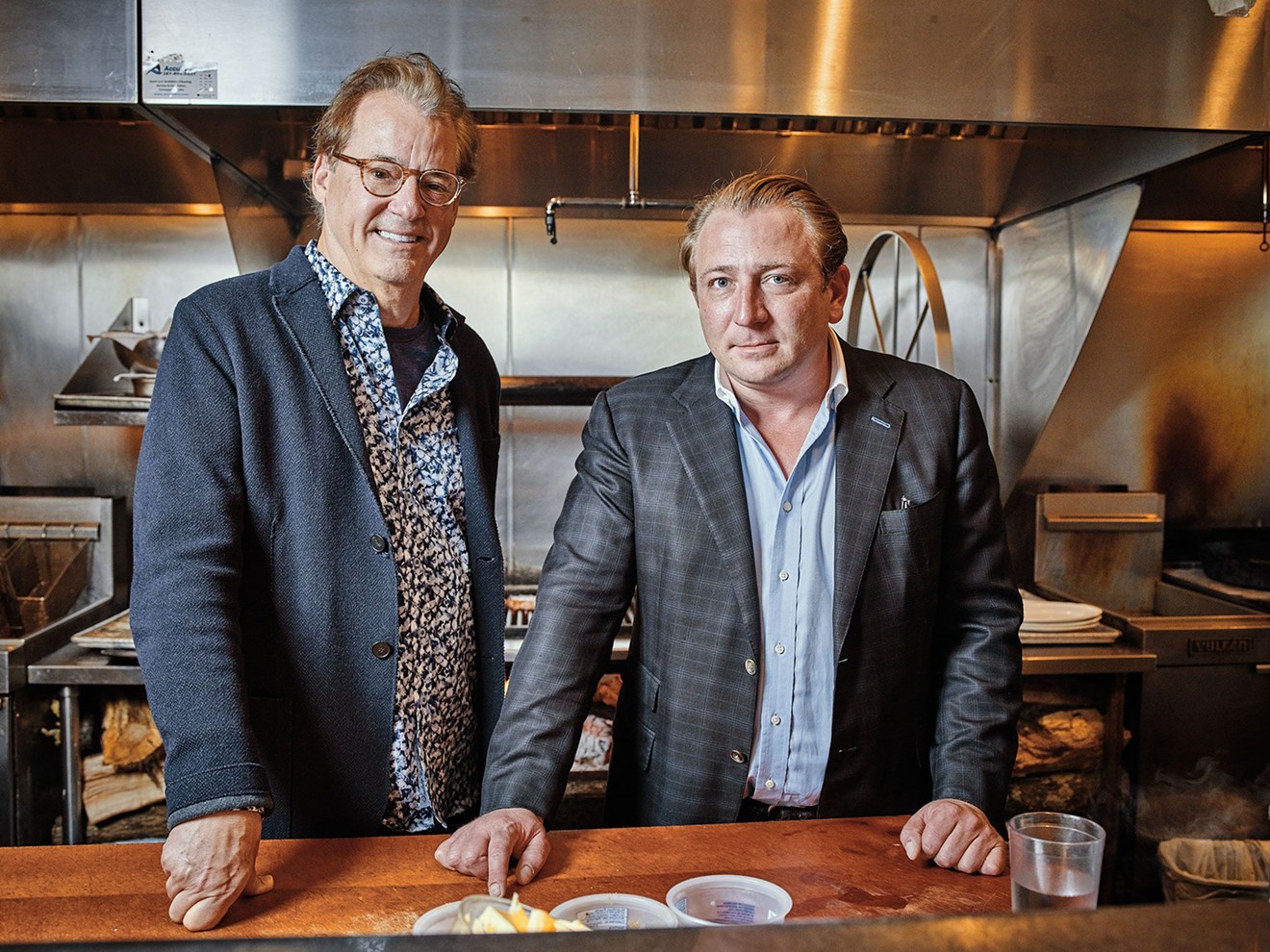 Cafe Annie will be overhauled by Robert Del Grande and Benjamin Berg. Photo by Fulton Davenport

Cafe Annie, 1800 Post Oak, closed May 16 in order to begin construction May 17 for its "reimagining". The revamping comes at the hands of Benjamin Berg who will collaborate with Chef Robert Del Grande to create a new restaurant experience called The Annie Cafe and Bar.

Berg, owner of Berg Hospitality Group, plans a remodel of the 11,000 square foot space. The bar area will be extended to create a welcoming ambiance with the second floor patio. Berg, whose portfolio includes B&B Butchers & Restaurant and B. B. Lemon, most recently transformed the former Italian restaurant, Carmelo's, into B. B. Italia Kitchen and B.B. Pizza.

“Cafe Annie is a Houston institution located in a prime Uptown location and I am extremely happy to have an outpost in this thriving part of Houston,” said Berg, in a press release,  “Chef Del Grande and I will combine our talents to create a lively dining and social scene."

Executive Chef and Partner Robert Del Grande says, “I’m excited to partner with him as we combine our strengths to create a fresh experience for guests.”

Canopy and  WoodBar, 3939 Montrose, will close May 26. Canopy opened in 2009 with the adjacent WoodBar opening in 2014. Owner Claire Smith also operated Shade in the Heights, which revamped to become Alice Blue in 2017. Now, with the upcoming expiration of the lease at the Montrose space, Smith has chosen to put the focus on Alice Blue, catering and raising her 15-year-old son.

Smith said in a press release, "We will miss our community of customers and staff on Montrose, but I am gratified by what we accomplished there and look forward to seeing everyone at Alice Blue." The restaurant is located at 250 W. 19th.

Chef Brandi Key, who recently became operating partner and culinary director for the three concepts will continue in that capacity at Alice Blue, according to the Houston Chronicle. Canopy and WoodBar will continue service through May 26.

Social Beer Garden HTX, 3101 San Jacinto, began its soft opening May 7 with family and friends. Now, you can join in on the fun, too. The wall of beer cans going up the stairs is an impressive sight as is the large beer garden with hammocks and Adirondack chairs for relaxing and corn hole boards for playing. There are also pool tables (bring cash), darts and ping-pong. It is also pet-friendly.

The bar features 44 beer taps and there are occasional food trucks for nosh. In the men's restroom, be prepared to have poster-sized photos of women taking a peek-a-loo while you're using the keg-shaped urinals. And they aren't being very complimentary.

Trendy Dumpling also has tea-smoked duck.
Photo by Ling Wang
Trendy Dumpling, 3285 Southwest Freeway, opened May 6, taking the place of Spicy Girl, which opened in August of 2018. The owners are still the same, but the focus is now on xiao long bao, or soup dumplings. That may come as a disappointment to some area residents who loved the Szechuan food from Spicy Girl, but there are still a few of the same menu items such as peppercorn chicken and and its spicy fish dishes. There's also the first Spicy Girl location in Midtown, plus its other concept, Wula Buhuan if you're jonesing for Szechuan.

However, for those needing a bao fix, Trendy Dumpling serves pork and chicken bao ($8.50 for 6 pieces) and a special soup dumpling ($16) which is filled with sea urchin and shrimp. There are also pan-fried and steamed dumplings. If you are in a noodle mood, there's Dan Dan and chongquing. Appetizers like smoked eggplant and soups such as matsutake chicken will get you started.

Baguette or batard. It's all good.
Photo by Carla Gomez
Magnol French Baking, 1500 North Post Oak, is now open.  The wholesale and retail bakery comes from long-time friends and co-owners, Otto Sanchez, Matthieu Cabon and Tina Blanco. All three chefs bring pastry and baking experience from Michelin-starred restaurants across the United States and abroad. Founder, Otto Sanchez met Cabon, a native of Brittany, France, in Las Vegas where both worked with Joel Robuchon's Michelin-starred restaurants. Cabon will serve as Head Baker, while Tina Blanco, will serve as Pastry Chef. Blanco has experience at a number of Houston hotels, including the Four Seasons and the Omni, as well as the River Oaks Country Club and Rainbow Lodge. Blanco also spent time in Vegas at establishments like Wyn Las Vegas and D.O.C.G. Enoteca.

Who needs fishes when you got loaves like this?
Photo by Carla Gomez
The bakery will serve the burgeoning restaurant community in Houston with wholesale deliveries twice a day. Classic breads such as baguettes, boules and pains de mie, will be made with carefully sourced organic flours. Fortunately for we pain-o-philes, the bakery will also have a retail store front for take -out loaves like pain de campagne and whole wheat baguettes. As my amie francaise would say, " Whaou!"

There's also a crepe station, CrepEifel, turning out sweet and savory crepes within the restaurant. And if your rugrats aren't up for anything remotely foreign, there's a kids menu with cheeseburgers and chicken nuggets.

For those looking for an exotic experience, hookah is available and on some evenings, belly dancers put on a show.

Take a trip to the island with SeaSide Poke.
Photo by Penny Nguyen

Fuqua Crawfish, 10990 Fuqua, opened late April. It offers crawfish, crab and seafood boils with options for adding sausage and corn. Chicken wings are also on the menu with a dozen different flavors available such as 5 spice basil, Buffalo and Thai tamarind. If you like your seafood fried, they have that as well. Crawfish fried rice and gumbo round out the menu.

Burgerim, 5887 Westheimer, began its soft opening last week. The burger eatery offers 1/3 and 1/4 pound options for its burgers, including Angus beef, crispy or grilled chicken, falafel, Greek lamb and Hawaiian salmon. It's popular for its 3 ounce slider boxes like the duo, trio or family box. It also serves chicken strips and milkshakes.

Judith Piotrowski can deliver a punch.
Photo by Xaymara Garza
Bayou and Bottle, 1300 Lamar, located at the Four Seasons Hotel, has promoted Judith Piotrowski to General Manager. Piotrowski has been the bar manager since 2016. Prior to Bayou and Bottle, the University of Texas graduate worked creating cocktails with Clark Cooper Concepts and Weight + Measures. Most recently, she added " Punch King Champion" from an event at Cochon 555 to her list of awards which also includes being a Stave and Thief Certified Bourbon Steward.

Antoine Ware has taken on the role of Corporate Chef.
Photo by Julie Soefer
Luby's, 1743 Post Oak Boulevard, is launching its pilot program, Rise & Shine, a fast-casual breakfast menu served from 7 a.m. to 10 a.m., Monday through Friday. The new menu was developed by Corporate Chef, Antoine Ware, along with Development Chef, Kaitlyn Venable- Valdez. Houstonians will recognize Ware as a former chef at Harold's and Hay Merchant.

The menu will have three sections. The first, Eggs Mark the Spot, will feature dishes like the customizable Omelet Trifecta. The second, Sunshine Favorites, will offer farm-fresh inspired dishes like chicken and sweet potato waffle, huevos rancheros and, hold on to your cowboy hats, avocado toast. Yes, Luby's is going there. There will also be house-made turkey sausage and biscuits if avocado toast is too Californication for you.

Rise & Shine at Luby's Post Oak.
Photo by Adam Brower
The third section, Hearty Health, will have options like the Rise & Shine bowl with quinoa, house-made salsa, charred corn, avocado, kale and egg. Following along with the current locavore trends, Luby's will be sourcing some of its products from near-by vendors such as Cake & Bacon, 44 Farms and Katz Coffee.

Sawyer Yards, 1201 Oliver, will have a handful of new tenants locating to the remodeled warehouse development in the fall, according to Houston Business Journal. City Orchard, a Houston-based hard cider company, will have a tasting room and patio. Besides cider made with apples from the Great Lakes region (we can't grow them so well here in Houston), it will sell beer, wine and food. It will be joined by Urban South Brewery from New Orleans with an 11,000 square foot brewery and 3,500 square foot patio and beer garden. Fainmous BBQ, which has a location in Westbury, will open at Sawyer Yards serving Tennessee barbecue from Knoxville natives James and Karen Fain. There will also be an axe-throwing venue, Urban Axes, an Austin-based company which offers recreational and competitive axe-throwing. We recommend throwing axes before throwing back cider and beer.
KEEP THE HOUSTON PRESS FREE... Since we started the Houston Press, it has been defined as the free, independent voice of Houston, and we'd like to keep it that way. With local media under siege, it's more important than ever for us to rally support behind funding our local journalism. You can help by participating in our "I Support" program, allowing us to keep offering readers access to our incisive coverage of local news, food and culture with no paywalls.
Make a one-time donation today for as little as $1.