This year's winner for composer, Dominick DiOrio, spends a lot of time in school, both as a student and a teacher. He's on track to receive his doctorate from the Yale University School of Music next May, and he's an associate professor of music at Lone Star College in Conroe. But it's not just his educational credentials that caught our eye. DiOrio takes this year's nod for composer because of his recent work with the Divergence Vocal Theater. He wrote the opera Klytemnestra, working with librettist and DVT Artistic Director Misha Penton. Based on the Greek legend of Clytemnestra, the murderous wife of King Agamemnon, Klytemnestra was well-received and cemented DiOrio's reputation as a forward-thinking young composer filled with new ideas, ready to tackle anything.

For NOLA-philes, there's nothing quite like the Big Easy in Houston. This little dive sits on otherwise swanky Kirby Drive, and though it's not much to look at, it's a treat for the ears. With live music every night of the week, the good times never stop rolling here. For just $5 on Fridays and Saturdays — and for free the rest of the week — you'll hear Houston's best cry out the blues. Don't miss zydeco night every Sunday, where Texans somehow adapt the two-step to the raucous fun of Cajun music.

There's a good chance that Emily Johnson's The Thank You Bar would have been just "eh" if it had taken place in a space less awesome than the DiverseWorks Theater. Same goes for Kristina Wong's Cat Lady and Catastrophic Theater's Paradise Hotel, which graced the simple yet fantastic space during the art collective's 2010-2011 season. For Johnson's performance, there was a heavy premium on sound, which was partially created, in loop format, by a live duo. Thanks to the space's acoustically conscious design, the subtle low-end whirls and high-end buzzes helped Johnson's performance art piece transcend from the really good to the super-freaking amazing.

Don Sam is everything a radio DJ used to be and still should be. He has a silky-smooth baritone voice. His knowledge of the vintage R&B, soul, funk and zydeco he spins every weekday afternoon stretches the limits of the word "encyclopedic." And best of all, he has fun doing it and makes sure his listeners do, too. Often the 38-year veteran's shows are themed — everything from weekly fare like "More Memory Mondays" and the Creole good times of "Two-Steppin' Tuesdays" to more specialized occasional shows like "B-Sides Only" and the always-fascinating exploration of white music that black people like that Sam calls something on the order of "Non-Blacks Who Have Made a Contribution to Our Music." On Fridays, Sam loves to pit musicians against each other in caller-decided showdowns of soul legends — so you can help settle the question of who really was better — Marvin or Stevie; Sam or Jackie; the Temptations or the O'Jays . It's the most fun you'll ever have getting a thorough education on any subject.

Inman Gallery is well respected for consistently presenting quality contemporary art. Owner Kerry Inman and director Patrick Reynolds encourage artists to take risks and try new things, making the space feel more Kunsthalle than commercial gallery. And now Inman is better than ever in a newly refurbished and expanded exhibition space. Last December, reddish-brown drilling mud bizarrely oozed up through and flooded the gallery floor, causing the gallery to relocate to the other end of the block for six months. (An electrical contractor boring underneath the 1928 Isabella Court Building was the culprit.) Inman's stable of artists is impressive and includes Houston greats like David Aylsworth, Amy Blakemore, Dario Robleto, Bill Davenport, Katrina Moorhead and Beth Secor. The gallery represents a number of Texas artists and has snapped up a variety of strong talents as they pass through the Houston area.

During the past few years, Washington Avenue has been getting all the drunk love in Houston from the mostly Anglo crowds with money to burn and brain cells to kill. But as of late, Midtown has been making a comeback of sorts as Houston's other drinking destination for the well-healed and pearly-toothed. With well-established haunts Community Bar and Pub Fiction, old-school video game-oriented upstart Barcadia, and the gimmicky Wonder Bar, the area is steadfastly holding its own in the neighborhood against the party bus-lined Washington. Now, if the parking situation could only get a bit better...

Poetry has a new platform in Houston, and it's a welcome one: the Public Poetry reading series. Started in the spring of this year by Fran Sanders in partnership with Houston Public Library and held in various public library locations around town, the series features four poets and a celebrity reader per session. Mayor Annise Parker and Dominic Walsh appeared as guest readers during the first two installations, while poets Rich Levy, Martha Serpas, John Gorman and Carol Munn each took turns at the microphone. The open forum lets the poets share their favorite works, covering topics from family life, to environmental issues, to romantic relationships, to societal decay, to intercultural exchange (and, for some odd reason, a lot of poems about the moon).

(An earlier version of this item incorrectly mentioned Stanton Welch as one of the guest readers instead of Dominic Walsh, and failed to note that the Public Poetry reading series had been started in partnership with Houston Public Library. The Houston Press regrets the errors.)

The scrappy kids in Rogue Improv have been making Houston laugh on Thursday nights upstairs at AvantGarden and Rudyard's for a little more than a year now with their brand of long-form improv. The team, lead by a core of eight players, men and women, plus assorted students of the craft, has made us spew beer out of our nose just a couple of times, but it's cool, because it wasn't expensive beer anyway. Admission is set at $5, which is roughly the cost of four double cheeseburgers from McDonald's, so you know it's a good deal. The group also invites troupes from around the state to throw down with them from time to time, including the New Movement from Austin. And yes, their group logo is supposed to be an elephant. Or something perverted.

Justin Cronin's bestselling novel The Passage was released in paperback earlier this summer, winning the Rice University professor a new legion of fans. The book, inspired by his daughter's suggestion for a story about a girl who saves the world, earned Cronin some $5.5 million in film and domestic publishing rights — before it was even finished. Obviously he's über-talented, but he's also über-smart because, from day one of his whirlwind dance with big publishing, he understood the difference between literature, which is what he used to write, and popular fiction, which is what he's writing now: one is appreciated, the other is sold.

"Kurt Schwitters: Color and Collage" at The Menil Collection

Kurt Schwitters's early 20th-century collages were packed with the detritus of urban German life, and those collages were the focus of this stunning show, "Kurt Schwitters: Color and Collage." Schwitters turned things like bus tickets, cigarette packs and chocolate wrappers into evocative gems that would influence artists for generations to come — including Texans like Robert Rauschenberg. In addition to the collages and small sculptures, the Menil brought in a painstaking replica of Schwitters's most famous work, the Merzbau. Created before WWI, the epic Merzbau filled the artist's studio; it wasn't a sculpture, it was a sculptural environment. Schwitters, who is considered by many to be the father of installation art, didn't even have a word to describe the work. The original Merzbau was destroyed by Allied bombers in 1943, and the replica was created for the Sprengel Museum in Hanover, making it a kind of pilgrimage for art lovers. "Kurt Schwitters: Color and Collage" was the first time the Merzbau was shown in the United States. 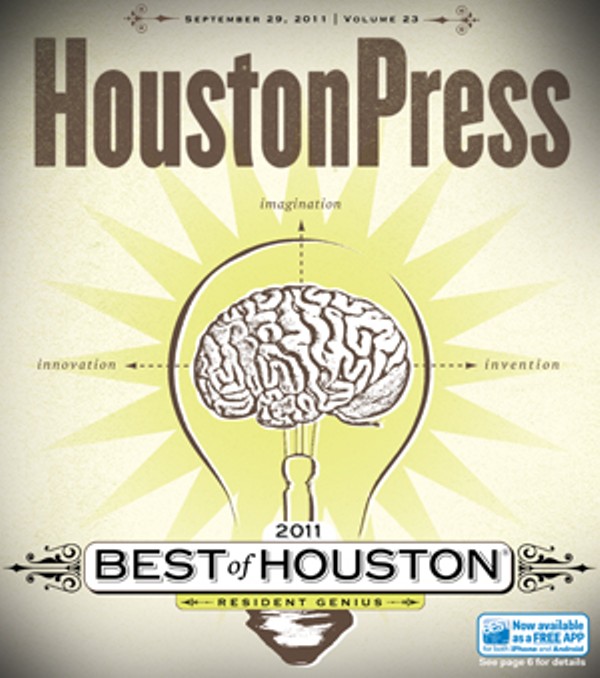