From their name to their repertoire, historical nautical themes permeate all that the Flying Fish Sailors do. Each of their albums features a sea shanty or four, and even shanties about such landlubberly subjects as mowing the lawn, and U-Haul trucks. (If you ask them nicely, they'll don "pseudo-pirate" attire for a gig.) Guitarist Jay Lee fondly recalls playing a set on the tall ship Elissa in Galveston — "When we would do the sea shanties, the volunteers on the Elissa knew the words and they would sing along, and it was really cool," he remembers. So far, that's been their only show on the briny deep, but they've played hundreds of gigs on land. "We've laid siege to every place from the Red Lion to the Mucky Duck and boarded many a bar," Lee says. As the Sea Captain on The Simpsons might put it, "Arrr, this be the yarrest band thar be." 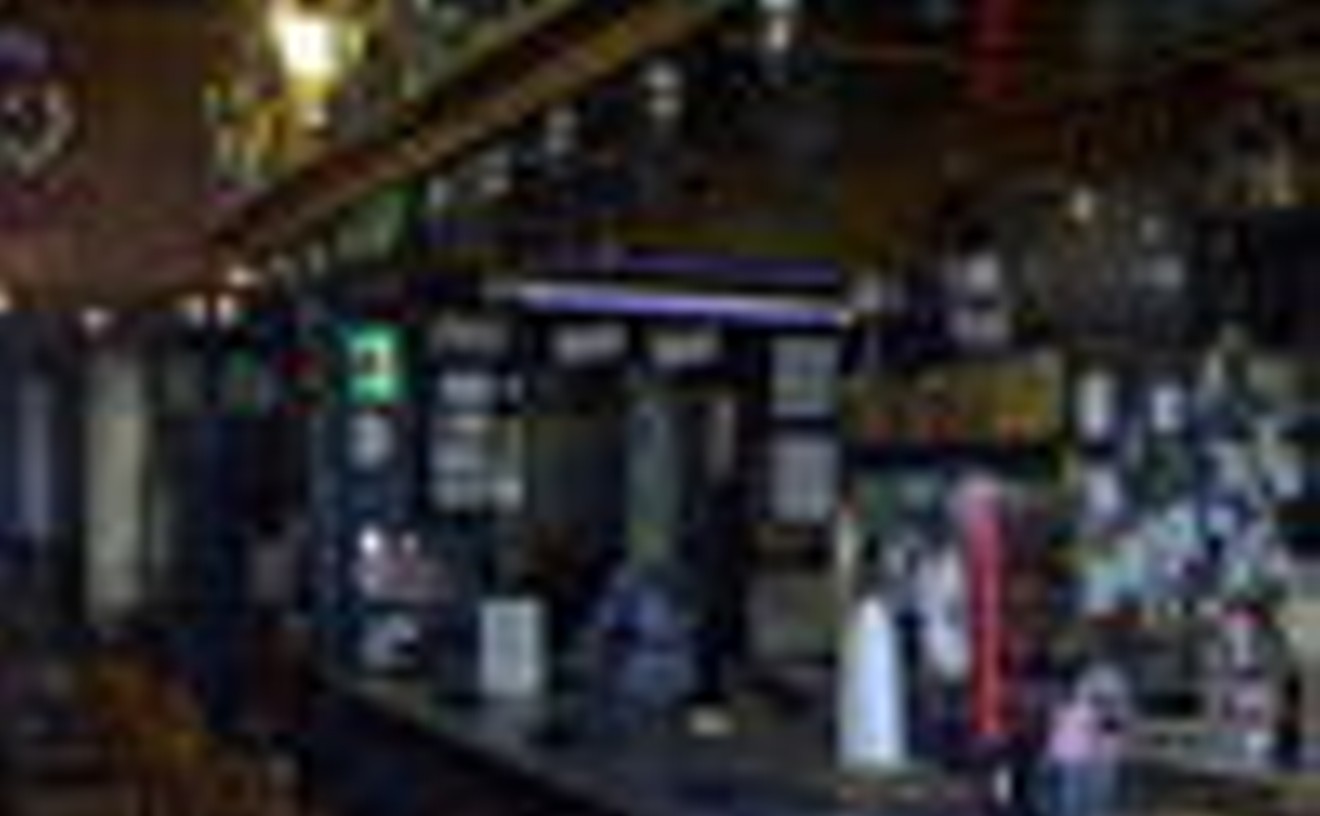 If you ever find yourself at Rudyard's on a Tuesday night, do yourself a favor and head upstairs to check out Rudz Comedy Werkshop. The free event — run by and for comedians — gives local comedians a chance to stretch their wings with more than the usual two to five minutes normally offered at open-mike nights. Every week at least three comedians are given 30-to-45-minute slots in the first portion of the show, which is followed by a standard open mike. Local comedian Al. B, who organizes the show, is always looking for fresh talent to feature, which is beneficial for fans who prefer to see all of what Houston comedy has to offer — not just the same handful of voices.

Sadly, except for "schmuck," "schlemiel" and a few other silly-sounding words, Yiddish is mostly dead. A Yiddish theater revival would go a long way in resurrecting the language, and there's no better place for it than the gorgeous, grossly underutilized open-air chapel at Emanu El Memorial Park. Long live Tevye the dairyman and Kalmen the matchmaker! 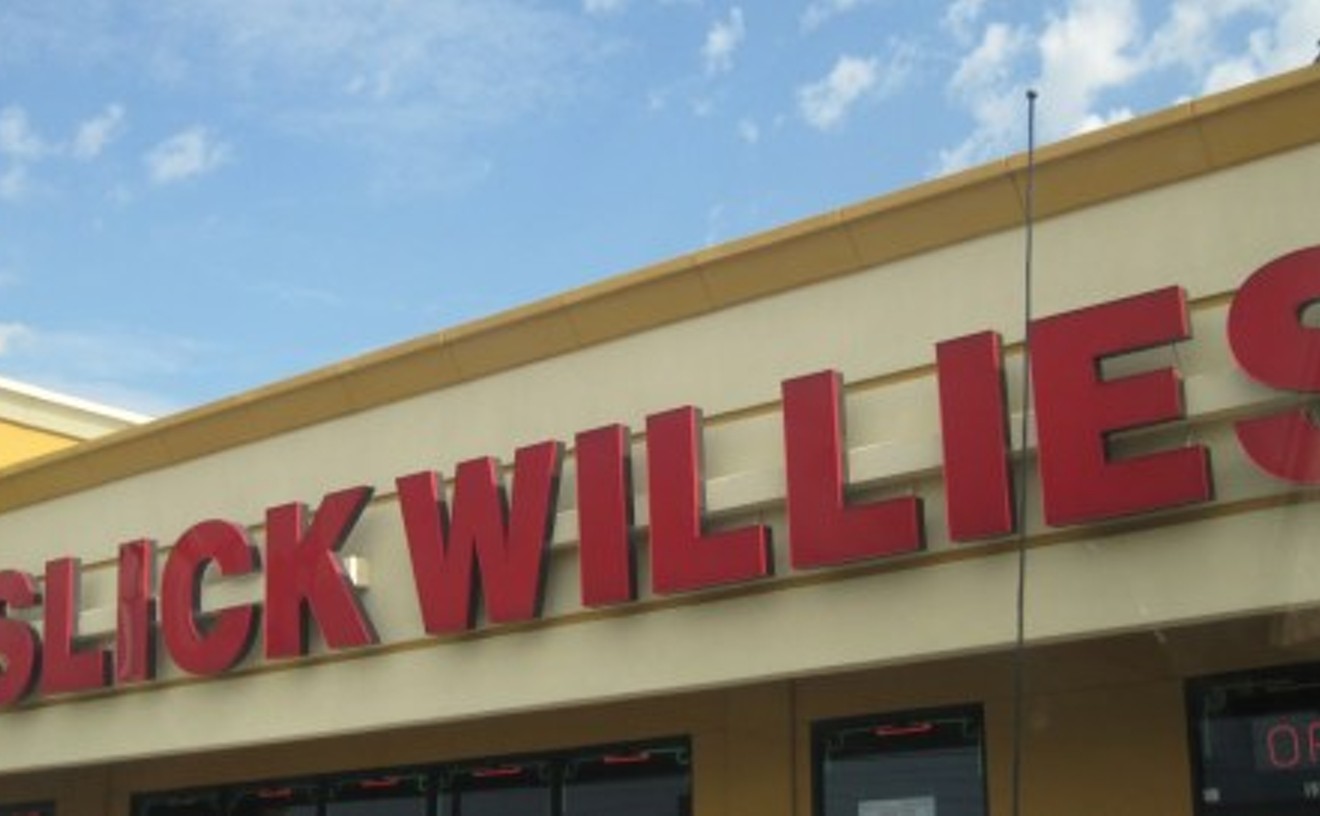 Sure, sure, we don't like to praise the chain outlets, but this really is the best pool hall in town, and we're not just saying that because we get a kick out of the irony of a place called Slick Willie's being stationed right across the street from the girl bar: Twenty-three of the big-boy pool tables (and one of the super big boys) are scattered about this clean, quiet, reasonably priced lair that, even though it's in the gayborhood, is populated by people who like their sticks and balls and holes in all variety of combinations. The place seems to keep the sharks and chickens out as much as possible, leaving yards and yards of felt for regular folks who like to shoot stick. Rack 'em up.

Nobody ever goes to this spectacular water park hidden in plain sight near the Med Center on the site of the old Shamrock Hotel. There's no free parking around and almost no foot traffic in the area, so likely as not your only company will be maintenance workers. And that's what makes it such a great place to take your iPod and meditate. Sit on one of the benches along the ivy-covered walls that line the ornamental pond and watch as jets of water spurt up in time to the songs of your choosing. Think about how all our lives are just like those of the droplets of water that fly upward, and no matter how high we fly, we're all destined to fall back to Earth and rejoin the one.

The Dirty South takes a lot of knocks from the greater Hip-Hop Nation. New Yorkers, especially, accuse us of dumbing down the music. They love to say hip-hop is dead, murdered by stupid songs like "Laffy Taffy" and "Chain Hang Low." They say our beats are wack and our lyrics are moronic. Chamillionaire is everything the smarty-pants New Yorkers say we are not. He's a fiercely intelligent rhymer, his beats are always fresh, he respects the music's history while carrying it forward and, what's more, he can sing. Somehow, he's commercial enough for radio and platinum-plus sales without being droolingly stupid, and clean enough for families to enjoy together, while hardcore enough to keep his cred. He's done not just Houston proud, but all of Hip-Hop America.

Annalee Jeffries is one of Houston's most wonderful treasures. Funny, fierce, smart and glowing with charisma and charm, the quirky actor is a bright spot in every production she joins. But this season she created one of her most unforgettable performances as the dowdy kook of a sister in the Alley Theatre's production of Sarah Ruhl's The Clean House. Though she did not play the lead, she was, in most every important way, the swooning soul of the production. Her bumbling Virginia was so fully imagined that her every gesture felt as though it was coming from some mystical place of truth. 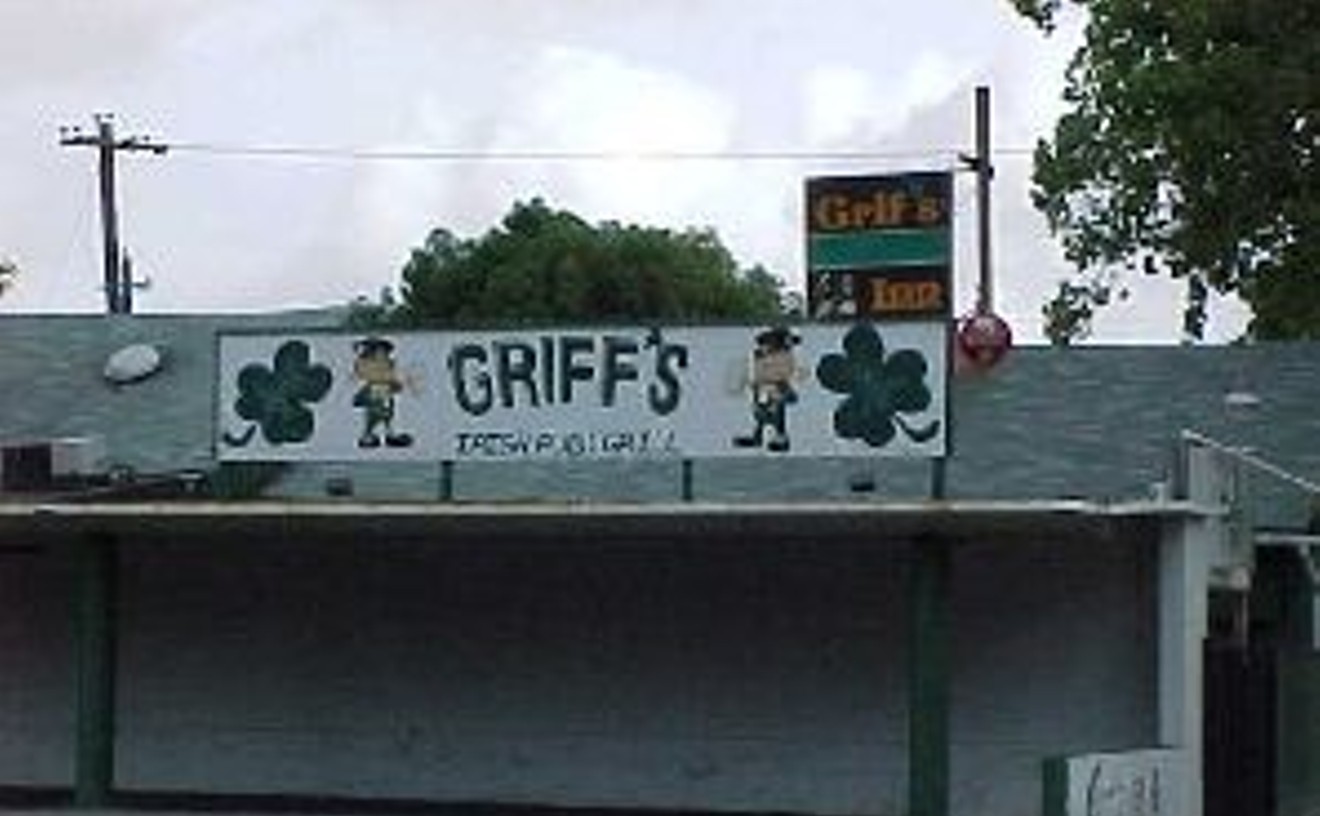 This venerable neighborhood bar isn't just for ass-kicking Saint Paddy's Day blowouts. It's also a great place to watch the Texans, Astros, Rockets or whomever any time of the year. And if your game is on a Tuesday night, you're in for an especially tasty treat: Griff's $10 steak night — which includes a 16-ounce rib eye, baked potato and a pint of beer. It's a friendly, laid-back atmosphere, complete with 16 TVs, three big screens and a cool little patio. Even if your team gets its ass handed to it, you're still going to have a great time here. Just have another drink to dull the pain. 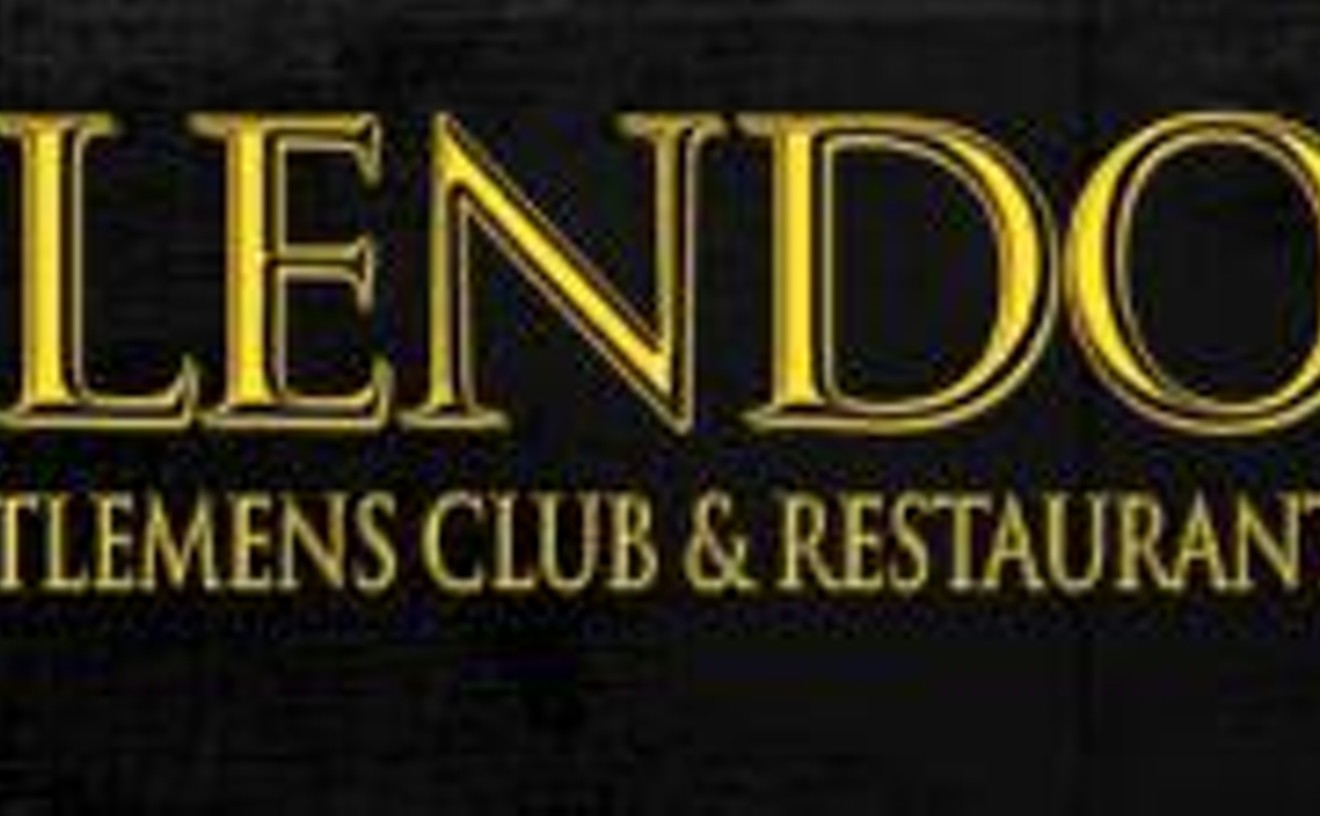 Whereas one can go to any Inner Loop establishment and get ignored for $100, those who want a real gentlemen's — and we use that word loosely — club experience go to Splendor. With all its 1983-casino­-lobby, uh, splendor, this independently owned and operated club treats every customer as if he's Tom Sizemore on a spending spree. Somewhere among the strikingly attractive dancers, the bizarre waterfall in the middle of the stage and the laid-back, friendly atmosphere, you'll find what you're looking for here. Just be sure to have some singles on you when you do. 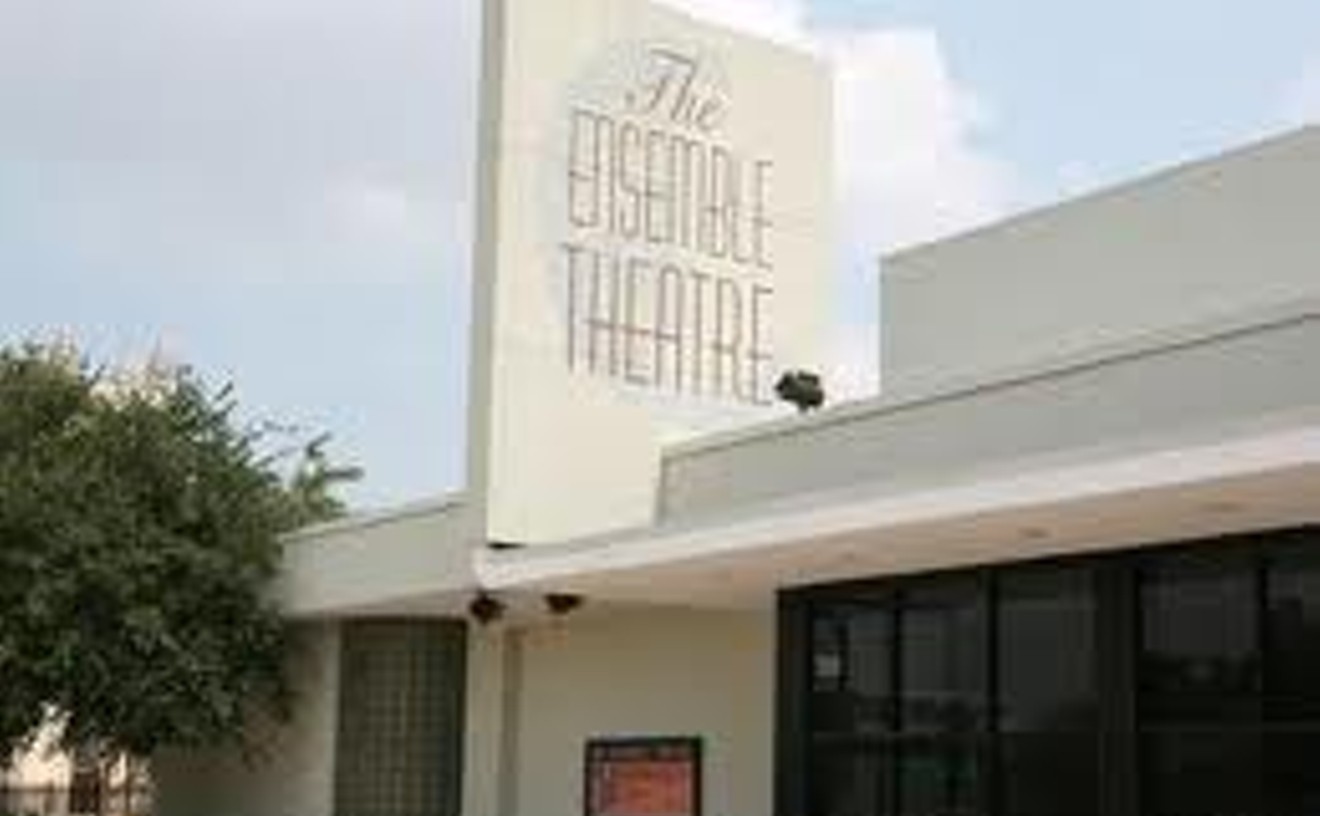 Founded 31 years ago "to preserve African-American artistic expression and to enlighten, entertain and enrich a diverse community," the Ensemble Theatre gets better each season, and this year was a banner one. The stage fare was distinctly varied and indefectibly produced with the company's usual high polish and downtown sass. There were two wonderfully different musicals: Christmas is Comin' Uptown (Dickens goes to Harlem — with attitude) and Get Ready (old smoothies stage a comeback); the civil rights dramedy Waiting to Be Invited; August Wilson's classic Joe Turner's Come and Gone; Lorraine Hansberry's mother of all black family dramas A Raisin in the Sun; and the wacky One Monkey Don't Stop No Show. The talent on display is prodigious, the works are given definitive productions and all that's needed is your presence. You can reach Ensemble by our beloved Metro light rail — the stop's right across the street — how convenient is that for great, enlightened theater?