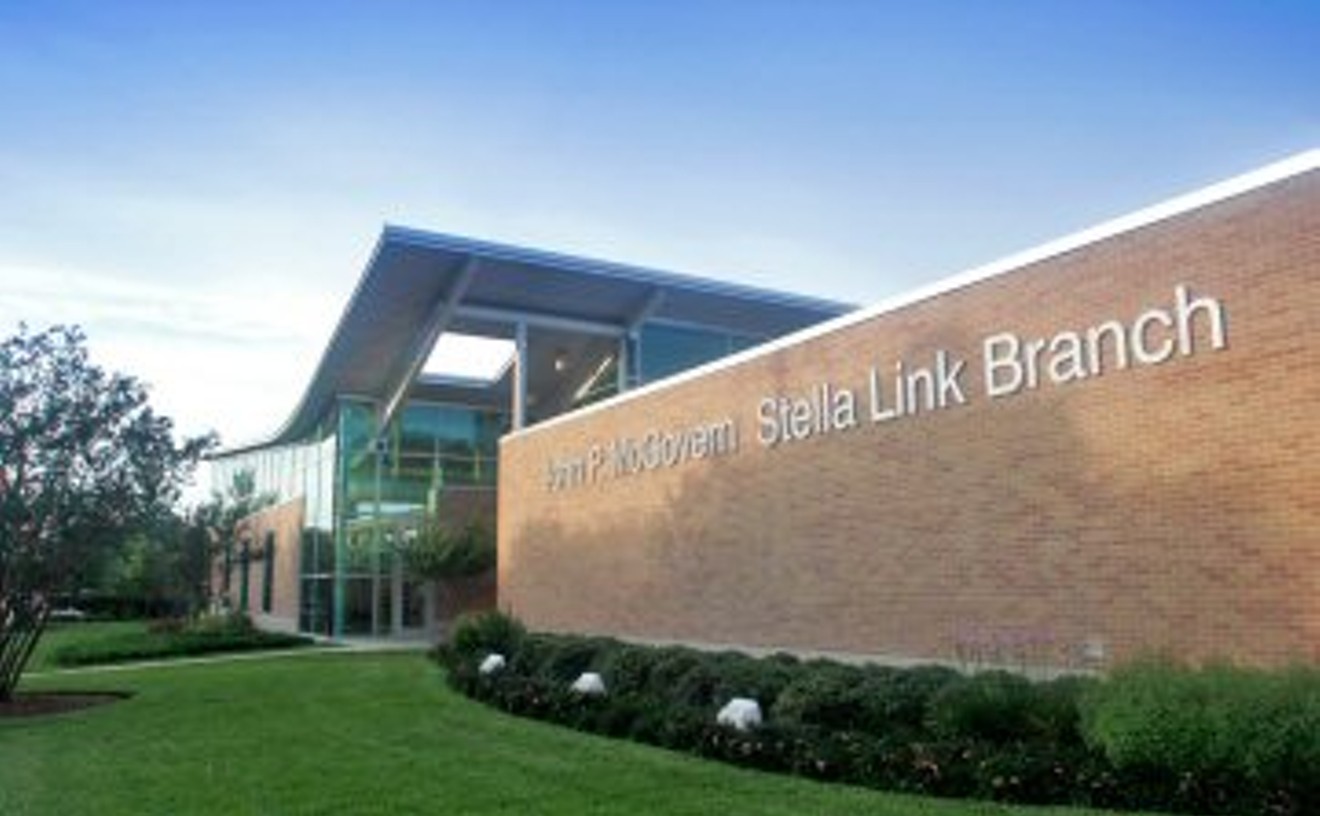 So many libraries are stale, stiff, silent. Theyre more like mortuaries than hubs of active study and learning. Not so McGovern-Stella Link, located in a modern glass and brick building with sleek furniture, efficient computers, a buzzing snack area and loads of natural light. With a line that forms outside on most mornings, it passes the most important test for any great library: People use it.

Okay, so the best duo in local radio is really a trio: Roula, Ryan and their sidekick engineer, Eric. Roula's vivacious and impassioned; Ryan's hunky and impassioned; and Eric sounds all nerdy (yet impassioned). They're not the usual radio schlubs: They're telegenic enough for a career in TV, but they'd have to lose a lotta IQ points. The Texas trio seems more intelligent than most on radio. While they have the silly patter you'd expect sandwiched between endless replays of Fergie and Justin Timberlake, they also spent an hour recently interviewing the father of a murder victim. The show airs weekday mornings from 6 a.m. to 10 a.m. We're serious about lovin' the creativity, wit, brainpower and nurturing all in one unlikely place: pop radio.

Houston used to be a thriving town for radio news, but those days are long past. Clear Channel has taken a big ax to the newsrooms of KTRH and KPRC, and while the reporters who remain do stellar work, in many ways the product is a shell of what it once was. Which makes the choice for local radio news an easy one: KUHF. As a public radio station, they're not as driven by the bottom line and can devote more time and resources to covering the city. Laurie Johnson and Rod Rice are talented, dedicated and know Houston well. We all might wish KUHF would put even more resources into the newsroom, but at this point, we have to take what we can get. Luckily, what we're getting from KUHF is pretty damn good.

Unless he's throwing eggs at them, Senator Robert Horton is generally ignored by City Council members, who are so used to his cryptic mutterings that there's no novelty left to them. To wit, an entry from one council meeting reads: "Senator Robert Horton...appeared and stated that he was God and continued expressing his personal opinions until his time expired." The Senator generally sits quietly in a front-row bench at each council meeting, patiently awaiting his turn to address the officials in his capacity as Senator of the World. He had some stiff competition for this category, what with a man named President Joseph Charles of Royalty, who regularly asks the council for travel expenses to cover his visits with the Queen of England. But Horton wins by a nose, thanks to his decision to throw eggs at council members on two separate occasions, ensuring his immortality on YouTube. So even if City Council won't recognize you, Senator, the Press will.

Harrisburg Plaza, the newly renovated 1929 blond-brick building with a terra-cotta roof and reflective steel canopy, would look right at home on any ivy-covered college campus. Instead, it houses an auto parts store and payday loan center on Houston's rough-and-tumble east side. Designed by German-born architect Joseph Finger, the building blends nicely with the adjacent church and always-busy Eastwood Park. Check it out: It's a great building to gaze at, and there are great prices on motor oil.

Like his Democratic Best of Houston® counterpart, we've had our disagreements with State Senator Kyle Janek's record. But the anesthesiologist from West U has shown some impressive thinking on health issues. This year he helped spearhead the drive to make Texas high schools test for steroids. Anyone who's seen the giant kids being produced by some of the state's football powerhouses knows there's been something fishy, not to mention something terribly cynical about programs willing to put kids' health at risk. Janek's bill requires random testing of athletes and educational programs for coaches. It doesn't go as far as some would like, but it's an important first step, and Janek is responsible.

Best Route into the City

If you reside on the northeast side, Bissonnet Street won't do you much good. But if you're anywhere on the southwest side, Bissonnet represents not only the best but also the most sane route to downtown. Offering a much-needed respite from Houston's choked, monotonous highways, Bissonnet will glide you through economically and ethnically diverse neighborhoods such as Sharpstown, Gulfton, Bellaire and West University, then drop you off in the Museum District at Main Street, where you can follow the light rail into the city's ­center.

This 48-year-old outdoor mall looked old when it opened and was full of life. Designed by architect William J. Wortham, Jr., a man with a fixation on all things Italian Renaissance, Westbury Square was supposed to evoke a village in Tuscany, and for a decade or so it thrived as a hotbed of the counterculture outside the Loop, far from Montrose. Today it looks more like Pompeii. Almost half of it was pulled down about ten years ago to make way for a Home Depot, while the other half molders and crumbles in the sun, rain, wind and mold. And yet there's life there — people still live on the upper floors of some of the buildings, and a cigar shop there claims to have Houston's largest humidor. So grab a stogie, fire it up and remember the way things were.

Estereo Latino KLTN 102.9 FM has tons of the latest hot Latin music. But then again, so do a dozen other Spanish-language radio stations. So, what makes the station stand out in the crowded Latino radio market? The DJs, of course. Host and show producer Raul Brindis is the morning funny man on weekdays and Saturdays, along with sidekicks Pepito, Caraturky, Columba, El Perico, El Costeñito and El Lobo. Brindis's radio show is one of the most popular in the city. The crew starts the mornings off with regular comedy bits, like "Confessions" and "Professor Chingao" (ask your Spanish-speaking friend for a translation). Then beautiful and sexy-voiced Gloria Rodríguez takes over for the afternoon, followed by René Rodríguez and Vidal Luna. Each show has a slightly different twist on the music, moving from norteño to grupero to cumbias. Stereo Latino keeps you dancing – and laughing. 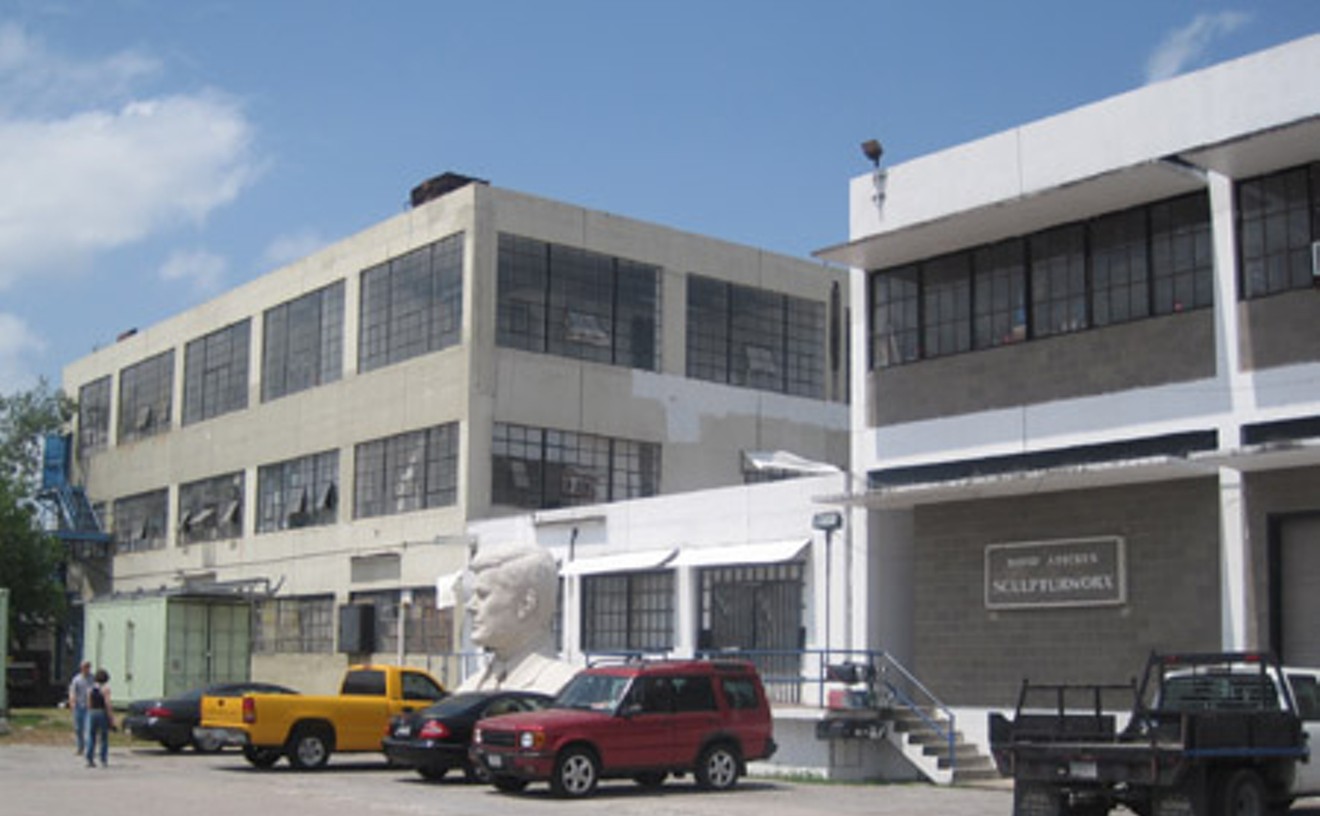 Okay, so we're not vouching for the artistic merit of David Adickes's gigantic sculptures, but for some reason this was the artist's year. Not only did Adickes finally finish his 36-foot-tall rendering of the Beatles, but it seems every out-of-town visitor asked us for directions on how to get to "that weird warehouse space with those huge presidential heads." (No one refers to the studio by its official, overwrought title.) And it's only by standing there, surrounded by tons of dead presidents, that other local, offbeat tourist attractions, such as the Orange Show or the Beer Can House, make sense. You realize the creators of those monuments just collected things and stuck them on their houses. But with something like SculpturWorx, you can't help but wonder: What the hell was this dude thinking?